In It’s A Wonderful Life, George Bailey – the CEO of investment bank Bailey Savings and Loan – won the hearts and minds of the citizens of Bedford Falls by supplying them with the financial freedom to resist the tyrant Mr. Potter. Such a quaint idea. Yet that’s what advocates in the UK are calling for with an innovative idea to finance New Energy and Energy Efficiency growth in these slow economic times.

The UK New Energy advocates arrived at the conclusion of a Green Investment Bank (GIB) by adding 3 things: (1) The urgent need for action on climate change, (2) the daunting UK targets for New Energy, Energy Efficiency and emissions cuts, and (3) the challenges of an economic crisis requiring severe spending cuts. The answer they get to this addition problem is the need for innovative financing to maximize the leveraging of public spending with buy-in from the private sector.

A Green Investment Bank (GIB) is described in Unlocking investment to deliver Britain’s low carbon future, from the UK’s Green Investment Bank Commission. It is one of the more innovative ideas so far proposed and especially worth noting because policymakers in the U.S. and elsewhere are considering it.

The basic idea: A combination lending institution and New Energy ultimate arbiter – something like a cross between the Federal Reserve Bank and the Federal Housing Authority – could channel that portion of the government budget dedicated to New Energy (NE) and Energy Efficiency (EE). It would accomplish 2 simple ends: (1) Streamline spending more efficiently, and (2) create the long-term certainty of supportive investment that would attract private sector buy-in. 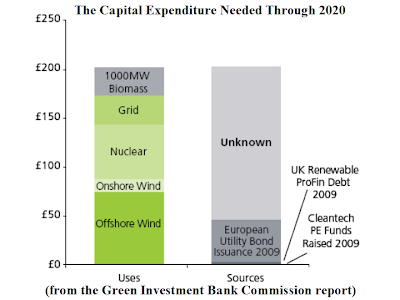 The need for a GIB has emerged with the slowing of returns from the European Union (EU) Emissions Trading Scheme (ETS). A predictable outcome of the recession and the concomitant retarded energy demand, the slowing is not a failure of the ETS marketplace but it is a barrier to the growth of NE and EE.

But the need to fund the growth of NE and EE is urgent. The fight against climate change cannot be hampered by natural gaps in the economy like market fluctuations. The GIB would be an alternative source of capital. With it, private sector investment could be sure of a steadier marketplace for its products and a steadier source of financing.

A GIB is needed, first of all, because of the scale of the investment. To meet the UK’s NE, EE and emissions-cutting targets for the fight against climate change will require more spending than anything since the reconstruction following World War II.

This is where one of the real failures of the marketplace becomes obvious. Trying to build a new NE/EE infrastructure without stable, long-term access to capital is like trying to rebuild the housing sector without having 20-to-30-year mortgages. A GIB is the answer because it expands available capital, reduces regulatory uncertainty, expands marketplace transparency, drives innovation and literally makes NE/EE investment more attractive to private money.

The benefits reach far beyond investment banking. A well-financed NE/EE sector would mean enhanced emissions-free energy capacity and security, paring away at dependence on price-volatile fossil fuels, and realizing an enormous wellspring of jobs and revenues.

A GIB would also be a vehicle for UK folks to buy “green bonds,” save in “green savings accounts,” and thereby share in the profits reaped by the transition to a New Energy economy.