More
Home Baseload Bioenergy Zero Emissions Australia, the Highest Ambitions from Down Under

Those Aussies, who have long faced a challenging environment on an island continent, are a practical-minded folk. Yet some seem to believe it makes sense to aim for the seemingly impossible dream of an emissions-free economy.

Zero Carbon Australia, Stationary Energy Plan; A ten year roadmap for 100% renewable energy, from Beyond Zero Emissions (BZE) and academics from the University of Melbourne, argues that the technology is already commercially available and there are no technical barriers preventing Australia from deploying the necessary infrastructure over the next ten years. It is a blueprint for a 100% New Energy economy that would transform Australia into a world leader in the marketplace growing around the fight to stop global climate change.

Nobody would doubt the audacity of BZE’s ambitions more than Duncan Currie, a writer for the very conservative National Review. He recently described Al Gore’s similar 2008 proposal for the U.S. to move to 100% New Energy and concluded “the promise of renewables has consistently been oversold…” Currie referenced work by mathematician Vaclav Smil and oil & gas industry shill Robert Bryce in arguing such a dramatic and abrupt shift away from fossil fuels is completely unrealistic.

The BZE paper presents a stark reminder of why such ambitions are, first of all, urgent. While world leaders, captured by the exigencies of electoral politics and media trivia, have allowed deniers to trumpet lies about a climate that is changing in plain sight, the concentration of greenhouse gases (GhGs) in the atmosphere has hit 390 parts per million (ppm) though frank climate scientists say anything over 350 ppm portends the worst impacts.

Currie’s basic thesis is that shifts from one type of energy dependence to another (wood to coal, coal to oil) have always taken decades. He fails to prove that such a transition CAN not be made more rapidly, only that it HAS not been done rapidly. Perhaps, BZE and Mr. Gore might reply, there has never been such urgency. ::continue::

Furthermore, Currie’s whole repetition of Bryce’s fatuous “straw man” arguments are pointless. Oil emerged in the mid-1800s but did not supplant coal in the U.S. until 1950, say Currie and Bryce. That’s right, because oil is for transport, which only achieved widespread availability and modern energy consumption dominance at mid-century. Coal was and is for heating buildings and generating electricity, needs that continue to sustain it. Oil’s rise, say Currie and Bryce, was driven largely by the automobile revolution and WWII military needs. Exactly, which demonstrates what can be done when there is an urgent need for a shift in energy dependence.

A little-remembered historical fact from early in World War II is profoundly telling. After German U-boats began sinking tankers carrying oil from Gulf Coast ports to major New England population centers, the U.S. was only able to draw on the abundance of Texas and California oil because of a heroic effort to build – unimaginably quickly – Big Inch and Little Inch, a pair of pipelines connecting the deep Southeast to the Northeast. Necessity drove the energy to do what had previously been thought unachievable. Necessity can be, to coin a phrase, the mother of an energy transition. 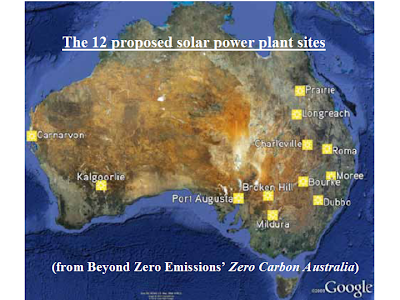 For Australia to make the transition to 100% New Energy, it would need to get 40% of its power from wind energy. BZE calculates that to be 23 installations with 2,000-to-3,000 megawatts (MW) each. It would also need to get 60% of its power from concentrated solar power (CSP). that would be 12 solar power plants, each with a 3,500 MW capacity. These are technologies already proven to have capacity in Australia, and to be cost-effective and scalable at presently-producing sites around the world. The report calls for backing up these power sources with hydroelectric and biomass generation sources.

Each CSP plant would have a 17-hour storage capacity and Australia’s wind power assets would be producing at least 15% of the time. Australia’s existing hydroelectric resources and the biomass plants, co-fired with the CSP plants, would be more than adequate for exigencies. So much for what Currie and Bryce call the New Energies’ incurable intermittency. Knowledgeable people understand the New Energies are not intermittent but variable, and variability can be managed.

The report projects the investment required for Australia to make the transition to a New Energy economy could be paid for entirely with retail electricity revenue if the price was increased ~6.5 cents per kilowatt-hour (kW-hr) in 2020. This is ~$AU420 per household per year, or $AU8 per household per week, in 2020. The increase in the price of Australian electricity in a standardized business-as-usual (BAU) scenario is approximately the same.

Not surprisingly, the Achilles heel of New Energy in the U.S. and around the world would also be a factor in the realization of the BZE roadmap: The plan would not work without adequate new transmission. Currie and Smil described the need for a massive amount of new transmission that make the 100% New Energy idea pretty unlikely. That’s also what a lot of people thought about the practicality of rapidly building pipelines to get Texas oil to New England at the beginning of World War II. It’s amazing what a national sense of urgency can accomplish.

As for those Aussies, they just don’t seem to understand the idea of limits. That’s the kind of people who do great things, eh mate? 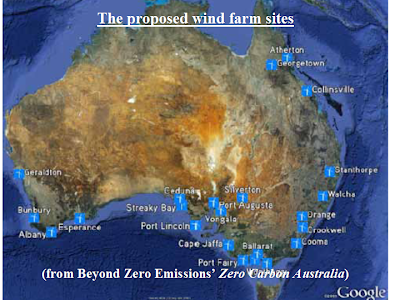 This post is based on BZE’s ‘Easy Way’: Renewable Energy for the price of lunch by Rikki Stancich (9 July 2010, CSP Today) and A Call for Energy Realism; The fossil-fuel economy won’t disappear anytime soon by Duncan Currie (August 2, 2010, National Review)