For the fourth year in a row, my model portfolio of clean energy stocks has beaten the clean energy sector as a whole, this year by 23.8%. Unfortunately, this was mostly due to another year of poor performance by my industry benchmark, the widely held Powershares Clean Energy (PBW) ETF, which lost 16.4% for the year.

My model portfolio, composed of eleven clean energy stocks listed in this article published on January 2nd, gained 7.4%, still short of the performance of the broad market, which gained 16.6%.  The general market gains also hurt a hedged version of the model portfolio, which finished the year up a paltry +0.3%.

I published my list of Ten Clean Energy Stocks for 2013 here.

Detailed performance of the individual pics can be found in the chart and discussion below. 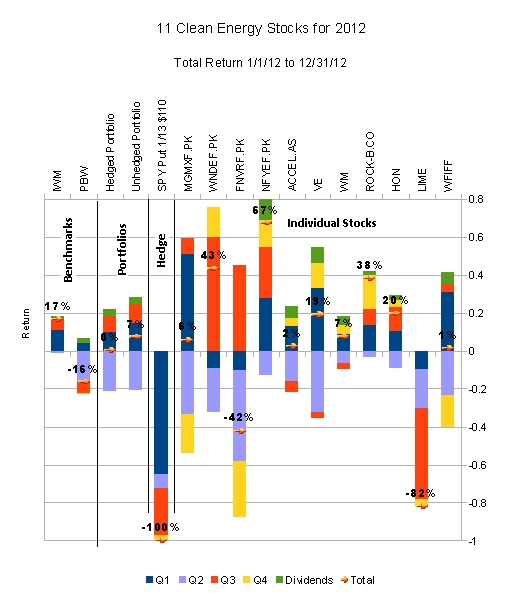 Waterfurnace was basically flat for the year, with a small stock price decline offset by a healthy dividend.  The decline was mostly due to slowing sales caused by low natural gas prices, which make using the company’s geothermal heat pumps less cost effective by comparison.  Waterfurnace stock is still cheap, and I expect natural gas prices to continue their recent rise, so Waterfurnace remains in the list for 2013.

The big loser of the year was Lime Energy, which discovered accounting problems with revenue recognition in July.  The company’s internal review is ongoing, and includes all its financial statements going back to 2008, and possibly some fictitious revenue recorded between 2010 and Q1 2012.  Although the board believed the size of the revenue misstatements to be limited to $15 million when the internal inquiry was first announced, the protracted uncertainty and a dilutive fundraising over the last six months have eviscerated the firms’ stock price.

The final results of the audit have been delayed several times, and are now expected in the first quarter of 2013.  Despite the ongoing uncertainty, the firm’s shares are currently so cheap, I expect that any conclusion to the protracted process should lead to a substantial rally in the stock price, and so Lime remains in the list for 2013.

Honeywell produced a respectable gain over the course of the year, and I’m dropping it from the list because several other stocks have become relatively more compelling.

Insulation manufacturer Rockwool produced a very healthy return over the year, but the stock’s rise now leads me to conclude that it’s no longer a great value, even though I appreciate the international diversification it brought to the portfolio.  I’ve removed Rockwool from the list for 2013, and have taken some profits on my personal stake as well.

Waste Management produced a modest return in 2012, and remains a good value in a cyclical business that is currently recovering.  With a healthy 4.2% dividend yield and good potential for price appreciation in 2013, WM remains in the 2013 list.

Veolia produced a strong return in 2012 as it rebounded from a very low valuation at the start of the year, even while paying a healthy dividend.  The stock remains cheap, but I’m dropping it in 2013 in favor of even more attractive value stocks.

Dutch bicycle manufacturer Accell produced a small positive return in 2012 because its large 6.9% dividend more than offset a small decline in the stock price.  The stock was hurt in 2012 by higher than expected expenses integrating its purchase of Raleigh Bicycles, but the benefits of that merger should begin to show in 2013.  Accell remains in the list for 2013.

Bus manufacturer New Flyer Industries was the star performer of 2012, as the high-dividend payer recovered from a depressed valuation at the start of the year caused by a stock reorganization that saw it cut its previously unsustainable dividend in half.  (New Flyer currently yields 6.8%.)  While the dividend is still very attractive, New Flyer’s potential price appreciation is much reduced, so I’ve dropped it from the main list but included it as an alternative pick for 2013.

Finavera saw its stock first fall as it failed to obtain sufficient new financing to repay outstanding debts, and then rise as looked to sell first a single wind projects, and then put the whole company up for bid when the wind farm sale fell through.  On December 23rd, it announced a financing and sale of most of its wind projects which disappointed investors hoping for a clean sale.  I believe they misunderstood the value of this deal. I expect the stock to recover significantly as investors return from their holiday breaks and revalue the stock with the new deal in mind,  Needless to say, Finavera remains in the list for 2013.

Western Wind first fell and then rallied when it, too, put itself up for sale under pressure from a hedge fund and other disgruntled investors.  Shareholders have so far received an offer of C$2.50 a share, but most expect a final offer to be closer to C$3, at least if the current stock price is anything to go by.  Since most of the price appreciation from the impending sale is likely already reflected in the stock, I’m dropping the company from the list in 2013.

I think the modest gain in Alterra’s stock price does not fully reflect the value of the company or its future prospects in a climate where many new investors seem to be looking at renewable energy projects as a viable source of stable income.  Hence, Alterra remains in the list for 2012.

For the first time since I started publishing this annual list, I have retained more than half of the stocks into the next year.  Those that I’ve dropped have been mostly discarded because their gains make their new valuations less attractive, but even most of these remain in my personal portfolio.  The two big losers in the 2012 list remain in the portfolio, with Finavera in particular likely to produce outsized gains in 2013.  I only truly regret including Lime in the 2013 list, but I’m including it again because, while there are legitimate reasons to question management’s behavior, I think many of these questions will be resolved in 2013.  While I think it’s unlikely that holders of LIME will recoup their 2012 losses unless they greatly increase their positions, selling now seems likely to be a mistake.

We enter 2013 with a number of clouds hanging over the stock market and the world economy.  That instability holds risks for stock market investors, but it also creates great bargains for those brave enough to look for them.