The investment tax credit (ITC), production tax credit (PTC), and 1603 Treasury cash grant get a lot of attention for their importance in spurring renewable energy project development. But they have a less-prominent sister incentive: new markets tax credit (NMTC).

Established in 2000 under the U.S. Community Development Financial Institutions (CDFI) Fund — a program of the Treasury — the NMTC has thus far provided 664 tax credits worth a cumulative $33 billion. The purpose of NMTCs is to catalyze economic activity and job creation in under-served areas. Unlike the low income housing tax credit, the NMTC program is not permanently authorized, but rather it is extended via periodic congressional allocations.  In February, the program announced it would issue $3.5 billion of new credits with applications opening in April, with a June deadline.

NMTCs provide a 39 percent tax break on eligible project costs — aka qualified equity investments (QEIs) — paid out over seven years (5 percent in each of the first three years and 6 percent in the four years thereafter). Only certified community development entities (CDEs) with the following characteristics can apply for NMTCs:

Once a CDE receives an allocation, it can “shop” the credits to investors. The CDE must first seek to partner with for-profit subsidiaries, and if that is not possible, the NMTCs can be offered to unrelated investors. Investments must be made in qualifying “low-income communities” as defined by the 2000 census tracks with either (1) a poverty rate of at least 20 percent or (2) a median family income that does not exceed 80 percent of the median family income for the state or area. Updated tracks based on the 2006-2010 American Community Survey are forthcoming.

In the basic NMTC finance structure, the tax credit investor receives a preferred equity payment in exchange for providing the QEI (i.e., project capital).  The CDE, in turn, passes the capital on to a “qualified low income community business” and requires a closing fee in the area of 3 percent of the QEI. 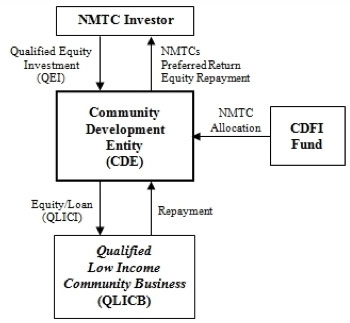 According to Dan Martin, Managing Director of Sperry Van Ness/Prism Commercial Real Estate, the net value of the tax credits is equal to a minimum of 20 percent of project costs.  The difference between the allocated tax credit (39 percent) and value (e.g., 20 percent) is due to the complex financial structure and number of parties. In an effort to address the high transaction costs, the CDFI Fund issued a notice for public comment in November of last year to garner suggestions on how the program can improve its effectiveness and reduce the cost burden on participants. The comment period closed in February. As of June 2012, no known actions have been taken in response to the public comment process.

An additional challenge with NMTCs is that CDEs have a wide range of investment interests. If renewable energy investments are not directly aligned with the mission of the CDE, it may be difficult for the project to gain involvement by the CDE, which is key to moving the project forward. Also, it is not feasible to become a CDE within a short timeframe, and therefore projects looking for CDE partners for the current open solicitation would need to collaborate with an existing CDE.

NMTCs have been used to support renewable energy projects, such as the City of Denver’s 1 MW of solar photovoltaics (PV) on city buildings.  And more recently, NMTCs were used (along with just about every other incentive under the sun) to support a 1.65-MW PV project in Salt Lake City.  However, it appears that no renewable energy projects were selected to receive NMTC allocations in 2011 (although there could have been applicants, and it is possible these details were omitted from available sources).

Ultimately, NMTCs remain a viable program but one with limited use by renewable energy developers.  Perhaps without revival of the 1603 Treasury cash grant, that will change.

Know of a recent clean energy project that has used NMTCs? Tell us about it in the comment section.