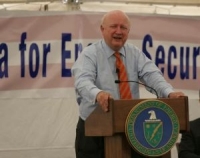 The IPEEC will serve as a forum for facilitating a broad range of actions that yield high efficiency gains. The partnership will support on-going work of the participating countries and relevant organizations, exchanging information of best practices, policies and measures and developing public-private partnership programs in key energy consuming sectors as well as on a cross-sectoral basis.

The IPEEC members will also develop public-private partnerships for improving energy efficiency, participate in joint research and development efforts and facilitate the dissemination of energy-related products and services. The energy ministers plan to hold the first IPEEC meeting before the end of the year.

In their joint statement, the ministers committed to “enhance vigorously” their efforts to address any supply disruption risks, to improve energy efficiency, to promote non-conventional oil and alternative energy resources and to diversify supply routes. They also noted that developing alternative transport and fuel technologies is essential to reduce the oil dependence of transportation throughout the world.

On the topic of renewable energy, the ministers indicated that they will “promote research, development and demonstration of new and renewable energy technologies and will facilitate financing for them.”

They also noted that appropriate regulation, incentives and/or market mechanisms were necessary in promoting renewable energy technologies and pledged to “accelerate enhanced deployment especially by improvement of grid integration in the field of electricity generated from renewable energy.”

The IPEEC declaration also stated that energy efficiency is one of the quickest, greenest and most cost-effective ways to address energy security and climate change while ensuring economic growth, a conclusion supported by a recent study from the American Council for an Energy Efficient Economy (ACEEE). The report, released last week, notes that a 20% efficiency gain in the U.S. economy by 2030 could provide an estimated 800,000 net jobs while contributing to a slight increase in the nation’s gross domestic product. ACEEE said that most national energy modeling efforts fail to account for energy efficiency’s contribution. According to ACEEE, if the energy efficiency resource were properly characterized by these models, the estimated costs of energy security and climate change policies would fall, while the benefits, net job creation and consumer savings would rise.

“Energy efficiency can provide a significantly large contribution toward stabilizing energy prices and limiting emissions of greenhouse gases,” said John A. “Skip” Laitner, ACEEE Director of Economic Analysis and lead author of the report. “It is important for policymakers to realize both the scale of this opportunity and the positive economic benefits provided by an emphasis on greater energy productivity.”

The G8 leaders received an International Energy Agency analysis outlining the progress of G8 members adhering to the St. Petersburg Energy Security Principles. Established at the 2006 St. Petersburg G8 Summit, the principles exemplify the shared interest of the G8 nations in promoting global energy security. The principles commit the G8 nations to abide by effective market and investment mechanisms and to embrace transparent legal and regulatory frameworks. Secretary Bodman and his counterparts reiterated their commitment to these principles and encouraged other countries around the world to also embrace the principles.

“To meet our global energy challenges, each nation represented at this weekend’s meetings must be an active participant in developing energy solutions that not only address future growth in energy demand, but do so in a way that reduces our impact on the earth’s environment,” Secretary Bodman said. “This has been a productive series of meetings, and I’m pleased that my G8+3 colleagues have agreed to take steps to achieve a more secure, clean and diverse energy future.”