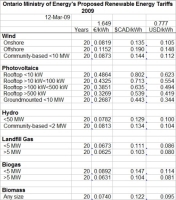 Toronto, Canada [RenewableEnergyWorld.com] Ontario’s Minister of Energy and Infrastructure, George Smitherman, announced that the Ontario Power Authority (OPA) will be establishing a system of feed-in tariffs as a result of the pending Green Energy and Green Economy Act. 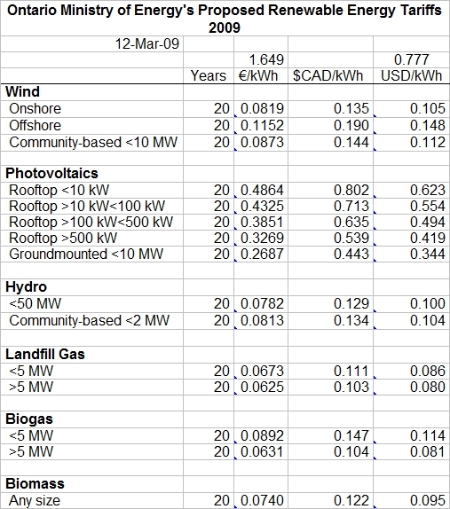 Minister Smitherman also released OPA’s proposed tariffs for a host of renewable energy technologies, they are listed on the chart to the left.

If implemented, the package of tariffs will represent the first application of Advanced Renewable Tariffs in North America. The system of feed-in tariffs envisioned by Minister Smitherman is a Canadian version of the successful policies used in Germany, France, Spain, and several other European countries.

OPA will begin public consultation on the tariffs and elements of the program March 17th and will continue hearings for the next seven weeks.

The tariffs are precedent setting in North America not only for the number of different technologies listed, including offshore wind, but also for the prices offered.

Solar energy advocates will be particularly pleased. Ontario’s proposed tariffs, if implemented, will be the highest in North America. For rooftop solar they will be comparable to those offered in Germany and France. On the other hand, Ontario’s proposed tariffs for ground-mounted systems will be less than those in Germany, a country with a comparable solar resource.

OPA’s press release suggested that the tariff for residential rooftop solar PV could result in 100,000 solar installations capable of generating one percent of Ontario’s electricity supply. One percent of Ontario’s supply is 1.5 TWh or nearly one-third the 2008 solar generation in Germany, the world’s leader in solar energy.

The wind tariffs proposed are less robust than expected. The tariffs for onshore wind are nearly identical to those proposed by the Ontario Sustainable Energy Association in 2005. Since that time, the installed cost of wind turbines has increased substantially.

The proposed wind tariffs are comparable to those in France, but substantially less than those in Germany. And unlike in Germany and France, the tariffs are not differentiated by resource intensity.

OPA proposes two wind tariffs, one for community wind projects, another tariff for everything else. OPA does not differentiate the tariffs further.

In another first in North America, OPA has proposed a specific tariff for offshore wind. Ontario fronts four of the Great Lakes: Superior, Huron, Erie, and Ontario. Consequently, Ontario has a huge offshore wind resource.

Currently, there are no wind turbines in any of the Great Lakes, though there are several proposals for projects in waters off Ontario.

The tariffs proposed by OPA represent the total payment for renewable energy. There are no federal or provincial subsidies for renewable electricity generation in Ontario.

While several U.S. states have rudimentary feed-in tariffs, often with contracts of limited length, no US state has as comprehensive a system of feed-in tariffs as that proposed by OPA. Nor does any state in the US pay as high tariffs as those proposed in Ontario, in part because of lucrative US federal tax subsidies.