If there ever was any promise of agreement on federal energy and climate legislation, it withered on the vine in Spring’s perfect storm of fossil fuel disasters. The just-released Kerry-Lieberman bill, 1,000 pages long and promising something for everybody, is now unlikely to ease the impending deadlock.

Fossil fuel supporters are dug in for the duration, desperately working to spin the greed-driven neglect that produced a coal mine human atrocity and an offshore oil rig human and environmental atrocity into some kind of perverse learning experience. The most vociferous environmental advocates are ready to respond: Hitler’s holocaust was a perverse learning experience, too, and the lesson was “Never again!”

While only the most adamant at the ends of the spectrum will raise a loud clamor in these days of Arizonan xenophobia and Wall Street-inspired class-based fury, but many will find things to oppose in the just unveiled American Power Act, an attempt at bipartisanship on federal energy and climate legislation from Senators John Kerry (D-Mass) and Joe Lieberman (I-Conn) that lost its Republican sponsor – Senator Lindsey Graham (R-SC) – over the immigration issue before it was finished. There will be protests about its provisions, be they benefits for or protections from the fossil fuel industries.

This week’s Senate and House hearings on the Gulf oil spill revealed the divide: Conservatives condemned the disaster, said environmentalists cannot use this as an excuse to stop oil exploration and called for getting on with drilling. Liberals condemned the disaster, called for a moratorium, New Energy and Energy Efficiency and insisted that getting on with offshore drilling as the fossil foolish demand is unacceptable. ::continue::

Although political vicissitudes are often surprising, this debate likely precludes compromises on the American Power Act that might otherwise have seen the creation of a first-ever national Renewable Electricity Standard (RES) requiring regulated U.S. utilities to obtain a specific portion of their power from New Energy (NE) and Energy Efficiency (EE) by a specified year, as well as a first-ever effort to put a cap and a price on U.S. greenhouse gas emissions (GhGs).

So it is worth noting a new study that examines what is possible without such legislation. Surprisingly, Beyond Business As Usual; Investigating a Future without Coal and Nuclear Power in the U.S., from Synapse Energy Economics, Inc. (Geoffrey Keith, Bruce Biewald, Kenji Takahashi, Alice Napoleon, Nicole Hughes, Lauri Mancinelli, and Erin Brandt) for the Civil Society Institute, concludes that a phased, long-term transition away from the dangers of coal and nuclear energy is both practical and economically feasible. 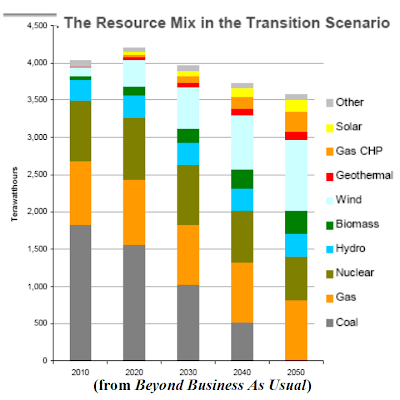 The paper’s “Transition Scenario” calls for a renewed emphasis on EE as a means to make NE practical and the dangerous Old Energies unnecessary. The U.S. could retire all its coal plants and 28% of its nuclear capacity. This would cost an estimated $10 billion more per year than “business as usual” (BAU) in 2020 but it would save $5 billion per year by 2040 and $13 billion per year by 2050 (not counting the savings from reduced GhGs and public health costs). The typical residential consumer would pay ~$2.20 per month more in 2020 but save ~$1.50 per month in 2040 and ~$4.00 per month in 2050.

Not only would such a transition have a profoundly favorable impact on global climate change but it would rid the air of much toxic coal plant spew (mercury, nitrogen oxides, NOX, and sulfur dioxide, SO2) and eliminate the environmental devastations of coal ash, mountaintop removal (MTR) coal mining and nuclear power plant radioactive waste.

Although fossil foolish fatalists might describe the non-partisan Civil Society Institute’s ideas as slightly utopian, the paper limits itself to existing technologies and assumes none of the windfalls to NE and EE that would come from legislation like the American Power Act. Its cost data is based on actual project costs. Its estimates of transmission costs are based on the building of comparable wires. And it includes in its NE cost data the latest information on grid integration of variable generation.

The fossil foolish would surely also complain that higher levels of dependence on “intermittent” energies would risk calamitous power outages – but they would be wrong. The New Energies are not intermittent, they are – like all forms of power generation – variable. By increasing EE, streamlining transmission and removing the most inflexible forms of power generation (coal and nuclear) from the power mix, more wind and other types of variable generation could be integrated into the grid supply at minimal cost in conjunction with the equally reliable firming of natural gas and biomass generation.

The study describes in detail the regional impacts of the Transition Scenario changes. It would utilize the Midwest’s massive wind assets for Midwestern power and South Central winds to generate electricity for the Southeast. The Northeast and California would exploit local resources and import less power. The Northwest would be a net New Energy exporter. The immense solar energy assets in the Southwest would be developed, as would nationwide biomass and geothermal assets. 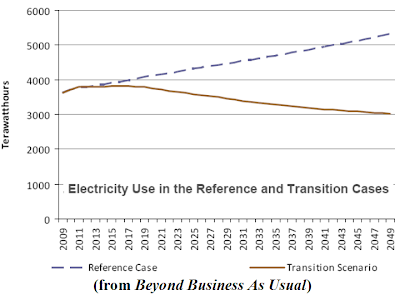 It is a simple and incontrovertible fact, discovered over and over again by study after study, that the nation’s New Energy assets – deployed in conjunction with available Energy Efficiency practices and technology – are more than adequate for the U.S. to transition from a polluted, energy-dependent part of the world’s problem to an emissions-free, domestically-driven New Energy economy that would be a part of the world’s solution.

Even if election year politics defeat it, the ineluctable future looms in the facts: While 29 coal miners were killed in a single cave in and 11 oil workers were killed and the Gulf brought to the edge of devastation by a single offshore oil rig explosion, somebody somewhere complained about the noise from wind turbines and a solar system installer banged his ankle hard on a rooftop panel. It is not hard to identify the disasters.

Money is going to be spent in regenerating the U.S. energy infrastructure. What remains is the choice of whether to spend that money on expensive efforts to rehabilitate Old Energy – like the follies of “clean” coal and affordable nuclear – or to spend it on New Energy – like the sun, the wind, and this good earth’s flowing waters and deep heat – and the infrastructure of energy’s future. 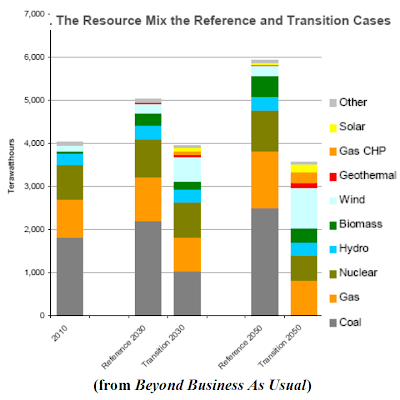 This post is based on What If There Is No Climate/Energy Bill? Civil Society Institute Report From Synapse Shows Clean Energy Future Still Possible For U.S.; With Uncertainty Mounting About Climate/Energy Bill, Major New Study for CSI Details Path for Breaking Away From “Business As Usual” in the Electric Power Sector. (May 11, 2010, PR Newswire)