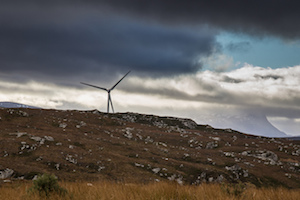 For those who are worried about the future of renewables following the reality of a Trump presidency, the news isn’t looking good. These are worrying times. Don’t let anyone tell you different. Rumors abound that he is looking to climate change deniers in selecting his energy secretary.

One of the more bizarre outcomes of the recent presidential election has been the association of Ukip maverick Nigel Farage, cozying up to the leader of the free world like they were best chums. Not only has this had various well-known politicians on both sides of the Atlantic banging their heads against a wall, but it is causing some serious concern among many ordinary folk as well.

Most people didn’t give Trump a cat in hell’s chance of being president. But he did. The same could be said for the Brexit result, which has left the UK government in turmoil.

So, when Trump asks Farage if he could stop a wind farm from being built near his Scottish golf course, it may be something to take seriously.

According to Andy Wigmore from Ukip in the Guardian recently, the President Elect doesn’t care much for wind farms. Wigmore is reported as saying:

“He has a bugbear. He doesn’t like wind farms at all. He said ‘When I look out of my window and I see these windmills, it offends me. Nigel, Arron, Andy, you have got to do something about these windmills.’”

The new president has already been involved in a court case over the building of an offshore wind farm within the eyeline of one of his golf courses in Scotland. Of course, this doesn’t mean that Trump is anti-renewables. Simply put, he just doesn’t want his investment damaged by the building of windfarms.

The good news is that what Donald Trump thinks isn’t that important to the people of Scotland. The region is at the cutting edge of wind farm development and renewable energy production in the UK and, some would say, in Europe too. It’s naturally placed, of course, with some high, regular winds. There is also plenty of evidence that wind could provide a large proportion of the country’s power if there was further investment.

Scotland has managed to put up about 1 turbine a day over the last four years and now has 3,400 of them onshore. That doesn’t mean there aren’t people who object to these types of development. One group of anti-wind farm protestors believe that the erecting of turbines across the Scottish countryside is getting out of control. Local objections in the past too have not been taken into account, and planning permission granted despite protestors voicing their opinions.

There’s no doubt that the turbines are making a difference in Scotland. In one financial year, the wind farms across the country produced some 9.5 million MWh of electricity, enough to power about over 2 million homes. There was even one occasion in August when there was high wind and the turbines were producing far more power than the grid could handle — it meant some had to be turned off.

Planning rules mean that certain areas of the Scottish countryside are protected despite what some protestors say. According to Senior Policy Manager at Scottish Renewables, Lindsay Roberts:

“The sector employs more than 5,000 people, sharing £10 million of benefit to communities and investing millions into the economy. Scotland’s most-valued landscapes are already off-limits to wind farms, and the rigorous nature of our planning rules means developments have to be designed and built to pass the strict tests set by local and national planning authorities.”

While Donald Trump might believe that wind turbines are a blight on the landscape, there’s no doubting the economic advantages they have brought to Scotland. According to the new Business and Energy Secretary, Greg Clark, Scotland is now leading the way in renewables and could soon be adding wave and tidal power to their mix. That is something to celebrate, even if you are worried about a future free world run by Donald and his friends.