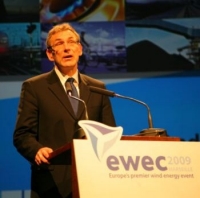 Marseille, France [RenewableEnergyWorld.com] Announcing new figures at the European Wind Energy Conference and Exhibition, which ran all this week, the European Wind Energy Association (EWEA) has increased its latest targets for installed wind capacity from 180 gigawatts (GW) to 230 GW by 2020. Coming at a time when global markets are in freefall, at first glance such sentiments may seem misplaced.

True enough, with the credit crunch all but stifling conventional project finance, in the short term some projects do appear vulnerable. This is anticipated to be expressed as a wave of development delays that may see installed capacity in 2009 down by as much as a fifth on 2008 figures as projects are frozen out of the market. Inevitably striking smaller developers, marginal projects and those without financing already in place, prospective offshore wind developments are looking most at risk.

Nonetheless, considering the market fundamentals the industry is convinced that the wind sector will emerge still stronger in 2010. It reasons that while more could be done to support the sector, such as government-backed credit guarantees and a more liquid, interconnected European electricity market, the political mandate to expand renewable capacity and the emergence of new sources of project finance are sufficiently robust to counteract the current economic turmoil.

Delivering the revised targets, Arthouros Zervos (left), president of EWEA, cited the positive political environment as being behind the move, saying: “The agreement on the EU Renewable Energy Directive in December 2008 and its mandatory 2020 renewables targets for the Member States have increased our optimism for the sector’s outlook.”

“However,” he warned, “these targets will only be met if all the Member States implement the Directive swiftly and effectively.”

EU Energy Commissioner Andris Piebalgs spoke reassuringly of high-level political support at the opening session of EWEC, the first major industry meeting since the Directive was passed, “Wind energy can replace a large proportion of the polluting and finite fuels we currently rely on. It makes good sense to invest in indigenous sources of power, which hedge against unpredictable fossil fuel prices and in which Europe has a real competitive advantage.”Nobuo Tanaka, executive director of the International Energy Agency (IEA), also highlighted the role that renewables have to play in the future energy scenario but he also echoed Zervos’ warning that in order to tap into wind’s full potential. “we need effective national policies and a strong international framework.”

Tanaka contends that renewables will deliver perhaps half of the carbon cuts that are believed to be required to cap atmospheric concentrations of CO2 to 450 ppm and limit the impacts of climate change. Zervos subsequently argued that the IEA had consistently under-estimated the contribution of wind to the OECD energy mix and that the IEA’s suggested contributions from CCS and nuclear — as much as 50% combined — were simply “not going to happen.”

Instead, he sees renewables contributing as much as 85% of the total carbon savings required. As Roland Sundén, CEO of LM Glasfiber and chair of EWEC 2009 had noted earlier, “In 2008, more wind was installed in the EU than any other power generating technology. The track record of wind is the most visible proof that it creates great value. And as the financial and economic crises deepen, this becomes especially relevant.”

There are now a total of 65 GW of wind power in the EU, producing some 142 Terawatt-hours (TWh) of electricity, about 4.2% of demand.

Despite the depth of this political support, the sector does acknowledge that it will inevitably experience a short-term slow down during the financial crisis. For example, previously the EWEA target of 180 GW included 35 GW of offshore capacity, whereas the new numbers include just 40 GW of offshore, a declining proportion that reflects the more marginal nature of such developments and the difficulty in executing such developments in the wake of the credit crunch.

Indeed, in a new analysis by Emerging Energy Research (EER), also released at the EWEC conference, the company notes that the financial crisis is to some extent stalling Europe’s wind energy market, with new wind plant commissions dropping by as much as 19% this year when compared to 2008. The company’s analysis finds that Europe is expected to add 7836 megawatts (MW) of wind capacity in 2009, down from 9556 MW in 2008. Western Europe will see the biggest drop in MW added, it says, while longer term, riskier markets in Eastern Europe and offshore may see delays.

The company says that the global credit crunch is leading to project postponements in key scaling markets such as the UK, Italy and France. With project finance almost frozen, only large players with strong balance sheets will be able to build new capacity in 2009, it says. Furthermore, according to EER, major utilities such as EDP, Iberdrola, Endesa, E.ON or RWE have already secured financing for their short-term pipelines, while smaller players have been forced to look for partners or to put their growth plans on stand-by.

Even so EER also concludes that the long-term fundamentals of Europe’s wind energy sector remain strong, particularly after 2010.

Growth in New Markets in the Long-Term

Improved liquidity in Europe’s credit markets, anticipated by the end of 2009, will likely boost growth in 2010 to 2008 levels, and steady growth is expected after 2011, helped by an expanding offshore wind market, with the overall wind market in Europe expected to surpass 16 GW in annual additions by 2020, says EER.

According to the analysis, Spain will keep its position as the largest onshore wind growth market in Europe throughout most of the forecast period, and despite a slow start, France will be the leading onshore growth market in Europe in 2010 and onward, due mainly to improvements to the permitting process, larger projects, higher wind incentives and the presence of leading wind players. In addition, Poland, Turkey, Romania, and Bulgaria, will add a combined average of 1.1 GW per year between 2009 and 2020, while Nordic onshore will start ramping up as Finland, Norway and Sweden define support schemes and development plans.

Offshore will be a key component to boosting Europe’s long-term growth prospects. EER forecasts that Europe will add over 1100 MW in 2010 offshore, led by a diverse group of markets including UK, Germany, and to a lesser extent Sweden. Projection for offshore installations during 2009 comes in at around 340 MW. European offshore activity is expected to account for as much as 27% of installed capacity in 2020 across 12 European countries. “Offshore developments will be the cornerstone of the development of utilities including E.ON, Centrica, DONG, Vattenfall, or RWE,” said EER’s senior analyst Eduard Sala de Vedruna.

EER further forecasts that global wind energy markets will grow from the 29 GW added in 2009 to over 61 GW in 2020, although Europe, the global wind energy market leader in 2008, will be overtaken by Asia and North America. “European markets will have to turn to offshore, repowering, and emerging markets for growth,” he added. (See chart, below, depicting the predicted European wind energy annual GW added from 2008-2020. Source: Emerging Energy Research) 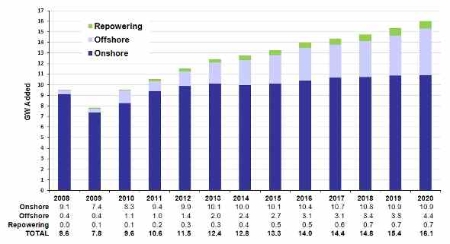 EWEA also concedes that while the wind energy sector is attracting new sources of capital that compensate for banks’ reluctance to provide project finance — such as a growing number of power companies with strong balance sheets and increasing interest from institutional investors — governments and the European Investment Bank must urgently establish loan guarantees to ease the banking liquidity squeeze and accelerate economic recovery.

“EU governments should learn a lesson from the U.S. recovery plan, which provides billions of dollars in loan guarantees to renewables. We need all channels of finance, including bank lending and export credits, to be wide open to meet demand,” said EWEA CEO Christian Kjaer. “This short-term difficulty does not accurately reflect the medium-term attractiveness of the sector. In a recent survey we found that 75% of institutional investors say they are likely to invest more in the sector by 2012,” added Michael Liebreich of analysts New Energy Finance, also speaking at the conference.

Despite the depth of the financial crisis, the sector expects to be among the first to emerge from it and “if anything, wind energy is less risky today than a year ago, following the EU Heads of States’ agreement in December 2008 to set binding national targets for the share of renewable energy in all 27 Member States,” Liebreich continued.

However, EWEA also set out a series of measures, which it says are vital if this rapid recovery is to be achieved.

Among these requirements is the passage of the European Commission’s €5 billion recovery plan that is due to be voted on by EU heads of state at the current spring summit. The plan will then head for approval by the European Parliament.

The €565 million that the plan dedicates to finance offshore wind, including the first stage of a North Sea offshore grid, will create jobs, provide new R&D opportunities to make the power sector more efficient and less expensive, improve operations and maintenance, and speed up market deployment, says EWEA.

Meanwhile, EWEA has also called for the development of an extended grid with changed operating procedures, which it says is necessary to rejuvenate the EU’s power system, and will help reduce its operational costs.

“At current fuel prices, electricity production costs from a new wind farm, coal plant and gas station are more or less the same. If a truly interconnected European grid existed and power markets were effective, the uncertainty of volatile carbon and fuel prices would ensure that wind, which avoids these unknown quantities, would become the most cost-effective of the three,” explained Zervos, adding: “We need the power markets to work to ensure that future investors are fully exposed to fuel and carbon price risk.”

“If the EU is to meet its CO2 reduction and renewables targets, improve security of supply and create real competition in the European power market, we need to extend our power grids and change the way we operate them,” Zervos concluded.

Don’t forget to look out for the upcoming report by our Technology Correspondent, Eize de Vries, on the latest wind sector technology developments revealed at EWEC 2009.