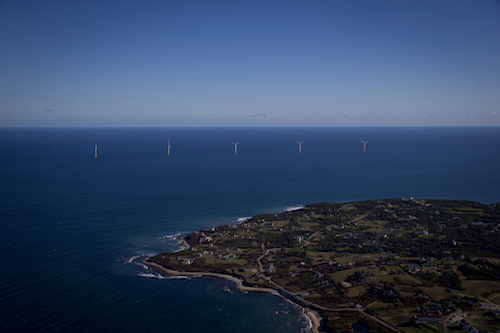 Gulf Island Fabrication Inc. has for decades built hulking platforms to extract oil and natural gas from the seabed. With the collapse of offshore drilling, the company has turned to helping harvest another energy resource: wind.

The turbines, 600 feet (183-meter) tall, represent a milestone for clean energy and an opportunity for fossil fuel companies. With more U.S. offshore wind farms in the works, Gulf Island and its peers say the nascent industry offers a new source of revenue to weather the volatile oil market. Cheap crude has long been seen as a barrier to renewable energy. Now those low prices are helping the wind industry grow.

“We see offshore wind as part of our future going forward,” said Roy P. Francis, senior vice president of business development at Houston-based Gulf Island, which has fabricated components for hundreds of oil rigs. “We chased this job for seven years.”

And there will be additional jobs to chase that could provide income for engineers and builders. With construction of the Block Island project completed in August, Deepwater’s next goal is a 90-MW wind farm off the eastern tip of Long Island that will power more than 50,000 homes. It’s one of two federally designated areas off New York for wind energy, and Governor Andrew Cuomo has said offshore turbines are a critical part of his goal of getting 50 percent of the state’s power from renewable sources by 2030.

The U.S. government laid out a plan this month to drive installation of 86 GW of offshore wind by 2050, and has awarded 11 leases to developers planning projects in the Atlantic. Massachusetts enacted in August a law requiring utilities to purchase 1,600 MW of offshore wind over the next 11 years.

It’s been a long time coming. Developers pushed for more than a decade to build wind farms off the U.S. coast. While the industry thrived in Europe with public subsidies, U.S. utilities balked at high power prices, inflated by the cost of building at sea.

Deepwater’s $300 million project, 3 miles (4.8 kilometers) southeast of Block Island, comes as a slump in oil and gas prices underpins a downturn in offshore drilling that’s led to dozens of bankruptcies and about 250,000 layoffs worldwide, according to the National Ocean Industries Association. Much of the work remaining for Gulf Coast service companies involves decommissioning offshore wells.

That paved the way for Deepwater to find space in fabrication yards and recruit vessels and crews to sail from the Gulf Coast, said Chief Executive Officer Jeff Grybowski.

“We certainly were helped by the oil downturn,” Grybowski said aboard a boat in Block Island Sound as workers prepared to hoist the final turbine blades into place. “It certainly made resources more available than they otherwise might have been.”

Executives at Gulf Island and other service companies working with Deepwater said they would have jumped at the opportunity, downturn or not. Oil has always been a boom-bust business, and companies are constantly looking for ways to diversify.

“We’ve been looking to do offshore wind for 10 years,” said Zachary Finucane, project manager for Keystone Engineering Inc. of Mandeville, Louisiana. The company has worked on offshore oil platforms for almost 30 years and designed foundations for the Block Island turbines.

Joe Orgeron’s family business, Montco Offshore Inc. of Galliano, Louisiana, has been supplying crew boats, tugs, lift boats and more to the offshore oil industry since 1948. He began eyeing ocean wind projects as a way to diversify in 2009.

“I have not missed a single offshore wind conference since,” said Orgeron, who sent construction vessels to install the turbine foundations and blades at Block Island.

Experience building offshore drilling platforms lends itself to offshore wind. Both entail anchoring colossal structures in hundreds of feet of water. That involves massive construction equipment, long supply chains and big components that are fabricated around the world and assembled at sea. Both tasks involve working amid waves, wind and unpredictable weather.

“You need to be very good at logistics,” said Even Larsen, CEO of Fred.Olsen Windcarrier AS, which sent a 15-story lift boat from the North Sea to hoist the Deepwater turbines into place.

“We saw this was an opportunity to play on some of our strengths,” said Irene Rummelhoff, Statoil’s executive vice president of new energy solutions.

Offshore oil drilling was largely pioneered in the Gulf of Mexico, where engineers, mariners and others spent decades devising ways to cut costs and build platforms stronger and faster. Grybowski said he’s optimistic the companies can repeat that feat.

“They did it for oil,” Grybowski said. “And they will do it for wind.”