According to the World Wind Energy Association, the number of countries using wind energy for electricity generation had increased to 86 earlier this year. This expansion takes the total global capacity beyond 200 GW and means that wind turbines now have the ability to satisfy 2.5 percent of world electricity demand — impressive figures for a technology that is relatively new.

The careful projections and plans that were made when wind turbines were first rolled out in large numbers could not possibly have foreseen every problem or potential augmentation that might optimise their performance and minimise their rates of failure. Engineers are still learning about wind turbines as practical experience of the machinery begins to build a clearer picture of precisely which components are likely to fail and how to manage operations and maintenance proactively. Indeed, some wind turbines currently in operation are still within their original manufacturers’ warranties, a fact that demonstrates how new the technology is as a staple provider of electricity and suggests that there are many contributions still to be made by designers and engineers who are still evaluating the performance of this “first wave” of turbines.

Gradually, a catalogue of reliable components and practices for the effective maintenance of wind turbines is becoming established. The goal for the maintenance of wind turbines, as with any other engineering industry, is to set in place a series of procedures that will increase efficiency by undertaking preventative measures. This in turn enables operators to minimise maintenance costs and maximise turbine availability, protecting profits for operators. To achieve this goal, components must be designed that are highly unlikely to cause failures and stoppages and this extends to even the smallest components, as research has shown that their failure can cause as much downtime as the failure of major items such as gearboxes or hydraulic systems.

In all engineering industries, consideration is given not only to the cost and effectiveness of replacement parts but also to the implications of performing maintenance and this consideration has a major influence when specifying parts for a wind turbine. There is a great need to reduce maintenance by using components that are self-regulating, robust and long-serving, particularly when considering the environment in which wind turbines are often situated. Accessing a wind turbine nacelle is often difficult at the best of times but when that turbine is located on an offshore wind farm that cannot even be visited until a repair vessel has been organised, then avoiding unscheduled maintenance and extending service times can save significant quantities of both time and money. The best way to sidestep such problems is to specify turbines with devices that ensure reliable function for extended periods under extreme operating conditions from the outset or, where existing turbines are concerned, at the earliest opportunity.

The good news is that even smaller components are increasingly being made available to a wide range of specifications, defending systems from failure and operators from the costs that even small unplanned maintenance periods can create. To fully appreciate how these small but vital components can help turbines harness wind energy to its maximum potential, we need to look at how wind turbines work and, specifically, how pressure switches and transducers are key to their effectiveness.

In a typical wind turbine, a series of pressure sensors are in operation to ensure that key actions are performed swiftly and safely. There are two sensors controlling the two yaw brakes; if the pressure falls below the set limit, the sensors send a signal to the control system, which in turn closes a valve to maintain the remaining pressure in the system accumulator. Another two sensors control the pump that distributes hydraulic pressure to all of the hydraulic equipment on the turbine. Two more sensors control the yaw accumulator, alerting the control system to turn on the pump and recharge the system accumulator when the pressure falls to a set limit. There are further sensors controlling the parking brake and monitoring the characteristics of the gearbox lubricant.

Critical to the smooth running of wind turbines are hydraulic systems. These play a vital role both in optimising and defending the turbine by controlling blade pitch and yaw to maximise the amount of power generated under varying wind conditions, while protecting the turbine from damage. A loss in hydraulic pressure can certainly reduce the performance of a wind turbine, but the consequences can be much worse if the pressure loss results in damage to expensive turbine components. If we take a look inside a typical hydraulic system, we can begin to understand precisely how important the role of pressure switches and transducers is in ensuring the continued reliability of turbine systems. 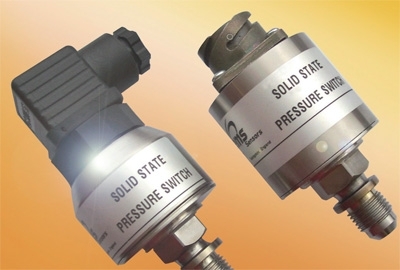 Pressure switches are a vital component of turbine control systems, being found for example in the pitch and yaw hydraulics. (Source: Gems Sensors)

In a typical case, the accumulator will be charged to 225psi and then be allowed to bleed down to 185psi before it is recharged back up to 225psi. To ensure that the pump is turned on and off at the correct times, it is important to carefully track the pressure in the system accumulator. This vital tracking service is performed by a pressure sensor and it thus makes a vital contribution to the efficient function of wind turbines.

This specific example illustrates the integral part played by pressure sensors in wind turbines, but it is important to note that sensors can take hundreds of measurements that monitor and control activity within the system, such as vibration, a condition that, unsurprisingly given its environment and function, affects everything inside a wind turbine. Indeed, the constant presence of vibration means that components measuring other readings must be designed to withstand vibration and yet still give accurate results.

Another important role played by pressure transducers is in managing the pitch control system, which is also fed by the main system accumulator. In most cases, adjusting the pitch angle of the blade accurately ensures optimal efficiency in wind turbines. When it comes to protecting the turbine, it is the speed and efficiency with which the blades can be furled that matters. This means that when the wind speed rises above the turbine’s rated capacity, the blades must be edged parallel with the wind to avoid any potential damage. The most common method of managing these requirements is the use of hydraulic pitch control, which uses fewer components than a mechanical system and is thus easier to maintain. In terms of performance, the hydraulic pitch control system also scores over a mechanical system in that it can respond faster to changes in pitch, minimising the potential for an overload. Hydraulic pitch control is typically accompanied by hydraulic yaw control, which positions the rotor into the wind to maximise power output.

Switches and transducers must be sensitive yet robust to perform effectively in a system where such forces are at work. Turbine brakes, for example, are subject to temperatures more than double those of car brakes, while gearbox bearings can move only a few degrees beyond temperature limits before failure becomes imminent. Nevertheless, pressure sensors can effectively monitor and control these conditions and maintain stable operation. So, with the potential for pressure sensors to make such fine but crucial control over wind turbine systems, it is vital that they are carefully selected by engineers to fully exploit that potential. 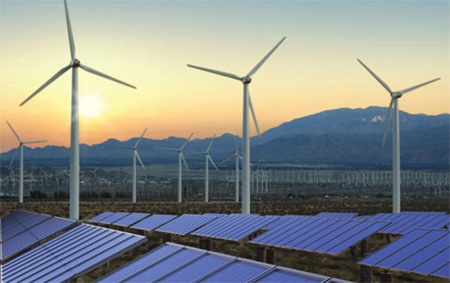 As the technology matures, greater experience is helping engineers assess which components are likely to fail first in a modern wind turbine

It is clear that the demands on wind turbines are considerable and that there is a need for sophisticated, reliable sensors to protect them and optimise their performance, and as a result of this, manufacturers are continually developing devices that satisfy that need. One factor that has recently been addressed is that of supplying sufficient overpressure capability. The phenomenal power of the wind provides the very energy that drives the turbine, but its natural unpredictability can threaten the effective function of the machinery. For example, a sudden gust of wind hammering the surface of the blades might generate a pressure spike on the hydraulics that control the pitch and yaw of the blades.

This specific problem has been addressed by Gems Sensors and Controls, which offers custom pressure sensors that allow overpressure capacity to be raised beyond the limits of conventional components. These sensors can also be protected by the addition to the pressure port of a snubber, a restrictive orifice that smoothes out pressure spikes.

Overpressure, dirt contamination, temperature fluctuation, electrical wiring faults — the number of problems that can be dealt with via pressure sensors is considerable and there are a few tips and tricks that can make them still more effective. For example, sensors that are deployed to monitor dirt contamination in oil supplies are best mounted away from where particles settle (such as at the base where particles sink to, or near the surface where particles may float); instead, these sensors are best positioned where the oil circulates. Similarly, temperature information is best gathered when the sensor is not positioned in close proximity to the hottest component.

The need for sensors in wind turbine systems to offer results that are not subject to corrupting influences has recently been addressed by the introduction of stainless steel casings. These casings provide a high level of shielding from electromagnetic interference, reducing the possibility that the vast amount of electrical potential produced by the turbine could cause the sensor to provide an incorrect reading.

Another important concern when specifying pressure sensors for wind turbine applications is their ability to withstand a wide range of temperatures and yet still continue to deliver reliable results. Not only must they resist external temperatures of different extremes but also heat from within the turbine itself. Pressure sensors typically operate in a confined space alongside electric motors, hydraulic pumps and accumulators, all pumping out heat of their own. Once again, engineers should consider the more advanced options now available, which use temperature compensation techniques to ensure accurate measurements, regardless of temperature.

For instance, it may be beneficial to customise a sensor to a specific proof rating — defined as the maximum level of pressure that it can withstand without damage. If a system is running at 250 bar, the designer might specify a sensor with a 250 bar scale and a 500 bar proof rating. However, conventional pressure sensors often do not provide a high enough proof rating for wind turbine applications so it may be prudent to consider more specialised alternatives.

The potential to reduce maintenance both planned and unplanned on wind turbines is huge and provides operators with a powerful tool that can help them to meet the demand for clean and economical wind energy. By surveying the current options when specifying pressure monitoring devices and keeping a keen eye on developing technology, engineers can tailor their systems with a collection of sensor components that, with fine precision, help keep turbines turning.