Milan, Italy — Never one to do anything by half-measures, a somewhat surprising legacy of ex-Prime Minister Silvio Berlusconi’s government has been to send installed capacity in Italy’s photovoltaic (PV) market soaring through the roof. Reacting to a resounding public vote against nuclear power in 2011, a fourth edition of feed-in-tariffs (FiTs) was announced for the sector and though somewhat reduced, they were still high enough to keep Italy’s “PV counter” ticking faster than ever.

According to Gestore dei Servizi Energetici (GSE), the agency which supports the development of renewable energy on behalf of the Italian treasury, Italy had reached 10 GW of PV capacity by September, a calculation based on applications for incentives. By January 3, 2012 this figure ballooned to 12.5 GW at a cumulative annual cost of €5.4 billion and over 319,000 installations.

However, a recent report published by KPMG Advisory in Italy, which documents the remarkable growth of Italy’s renewable energy market, is emphatic that while these technologies present an attractive solution for a secure energy supply with reduced import dependence, the incentive mechanisms which have been so instrumental to sector growth are unsustainable.

In late November 2011, Investing in Renewables: Trends, Opportunities and Perspectives was first presented to an audience of around 50 key sector players. According to Gianpaolo Attanasio, the associate partner responsible for the report, the audience had two major concerns: stability of regulations for the future and fear that a sharp reduction in future subsidisation of the sector could halt investment activity and lead to delocalisation to the neighbouring countries of Eastern Europe. Indeed, with an unexpectedly new “technocratic” government in place, a scheduled talk by the representative of the Ministry of Economic Development was cancelled. “The concerns are not about the evolution of the regulation itself,” says Attanasio, “but about the mid-term stability of this regulation. The big concern in the past was that every 12 months the regulation kept changing.”

As described by Attanasio, the report was driven by two motivations: to define quantitative scenarios for green certificates for the wind, biomass and mini-hydro sectors based on realistic assumptions, and to paint a complete picture of Italy’s renewable energy landscape for potential investors. The comprehensive report summarises the history of incentives for the sector; benchmarks some of the key players, and touches on more specific issues such as reaching grid parity, project financing and M&A activity.

Italian attitudes towards renewable energy are not politically polarised, and it is generally seen as an attractive solution for energy autonomy given the country’s reliance on imports for 97 percent of its gross domestic energy needs. In 2009 energy from non-fossil fuel sources (including hydro over 1 MW) accounted for 11 percent of energy consumption. Limiting the analysis to domestic electrical energy production, however, Italy, with its absence of nuclear power, is highly dependent on thermo-electric generation (77 percent in 2009). In 2011 Italy generated approximately one-quarter of its electricity from non-fossil fuel energy sources, with large-scale hydro accounting for the lion’s share.

The KMPG definition of renewables excluding hydro over 1 MW describes technologies used to generate electrical energy without use of fossil fuels or nuclear power — and, most importantly, as not having reached grid parity and therefore in need of incentives (wind, PV, biomass and biogas, geothermal and mini hydro). By this definition, in 2010, of 106 GW of electrical generation capacity and an annual production of 299 TWh, thermal electricity generation, hydro and renewables accounted for 74 percent, 17 percent and 9 percent of national electrical energy production respectively while having 71 percent, 16 percent and 12 percent of capacity. From 2005 to 2010, production from traditional thermal electric generation actually decreased by 10%, while hydro’s share increased by 40 percent and that of renewables by 100 percent. 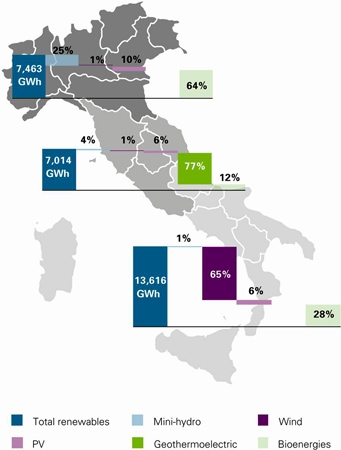 The PV incentive scheme seems to have been successful in decentralising power production. While in 2010 there were 871 thermal electric installations and about 1000 for hydroelectricity, renewable energy sources accounted for 159,000 installations, with PV alone accounting for 98 percent of these.

Based on data from Terna S.p.A, the owner and operator of the national high-voltage electricity transmission grid, the report spotlights the remarkable growth rates of the PV, wind and bioenergy sectors. From 2005 to 2010, installed capacity in PV increased from 7 to 3,500 MW — a CAGR of 246 percent compared to a CAGR of 29 percent for wind which, with almost 6 MW of installed capacity in 2010, accounted for 45 percent of renewable energy production capacity.

Though some form of renewable electricity generation is present in all 20 Italian “regions” (the highest-level administrative divisions of the state), the distribution of renewable technologies throughout Italy reflects its diverse geography. In the northern macro-region which includes the Alps, the major industrial centres and the agricultural plains of Lombardy, Piedmont and Veneto, bio-energy and mini-hydro account for 64 percent and 25 percent of electricity generation from renewable resources. In the central part of the country, on the other hand, geothermal resources are the major renewable electricity generator, accounting for 77 percent of production, all of it concentrated in Tuscany. In the windy south (the macro-region is defined to also include Sicily and Sardinia in addition to the southern regions), bioenergy accounts for 28 percent and wind power for 65 percent.

The southern macro-region, as defined in the report, accounted for half of renewable electricity generation in 2010. Tuscany alone accounts for a fifth of Italian renewable electricity generation followed by Puglia (13.6 percent) and Sicily and Lombardy with approximately 9 percent each. Wind is an important resource in the two southern regions whereas in Lombardy, where the highly polluted air rarely moves, the major contributor is bioenergy.

While this uneven development is largely attributed to the terrain and climate, the report suggests it may also reflect the fact that complicated regulatory processes and grid connection requirements can vary considerably from region to region.

One of the main original contributions of the report is a section benchmarking a sample of 25 companies operating in the Italian market based on publicly available financial data. The companies were chosen as being key players and have been categorised into three clusters. The first consists of eight traditional energy players (of which three are Italian) with divisions for renewable energy: Enel Green Power (really the major player), Alpiq, BKW, EDF Energies Nouvelles, Edison, E.ON Climate & Renewables, International Power (GDF Suez) and Sorgenia. The second cluster is composed of nine Italian industrial players which have diversified into renewables. The final cluster, designated “startup,” is a catch-all term for some independent companies which, by and large, focus on the development of renewable energy. Warning that “this is a dynamic business with very heterogenous players” and that “it’s a model difficult to depict unequivocally,” the report offers a summary of profitability and diversification of these major players.

The bioenergy sector shows a medium level of concentration with the five largest operators accounting for 17 percent of national capacity while the PV market is extremely fragmented: the five largest account for only 4 percent of installed capacity as a result of the low capital cost of entry. The sample collectively accounted for 30 percent of renewable electricity production in 2010 or around 8,700 GWh. The sample companies focus their electricity production in the southern macro region where the companies in clusters two and three have 94 percent of their installed capacity.

For Attanasio, one of the surprising findings of the study is the relatively high yield of investments in this sector. While acknowledging that it is not possible to estimate the unique contribution of renewables from overall corporate activities for most of the traditional energy companies in the first cluster (for example, Enel Green Power), the analysis finds that the ratio of profitability (as measured by EBITDA margins to revenues) is relatively high for clusters two and three. While the majority of companies have revenues under €100 million, the EBITDA margin falls between 35 percent and 90 percent with a solitary exception.

Attanasio feels that this points to subsidies for the sector as having been too high from a long-term perspective. Installed capacity, particularly in the PV and wind sectors, has rocketed between 2005 and 2010 — but at what cost? The report emphasises that it has been difficult to achieve equilibrium between continued financial support and the attainment of grid parity.

The analysis clearly identifies how sector growth rates do not necessarily correlate with contribution to renewable electricity generation, as in the case of PV with its phenomenal growth rates and low contribution. Attanasio believes that what the country needs is a comprehensive national energy policy, not a hastily cobbled patchwork of incentives for various renewable energy sources.

Currently there are two basic types of incentives: market incentives (Green Certificates) and administrative mechanisms such as the all-inclusive tariff and FiTs. The Green Certificate scheme applies to all renewable energy sources (except PV) and to all installations which commenced operations before the end of this year. Energy is sold at the market price plus the value of the incentive as determined by the market; the incentive has a 15-year lifespan. However, as this mechanism is gradually being phased out to be replaced with FiTs, for Attanasio the key issue now is the uncertainty surrounding incentives for wind and biomass. In the past energy policy was often heavily influenced by key players, but with a government that seems to be taking snap decisions before it can be influenced, it remains to be seen how the battle will play out.

Another scheme, the ‘all-inclusive tariff’, offers smaller renewable electricity generators from all sources (except PV) an alternative to the Green Certificate Scheme whereby the energy is sold at a price that includes the incentive. The size cutoff depends on the technology: 1 MW for bioenergy, cogeneration, mini-hydro, tidal energy and geothermal and up to 200 kW for onshore wind installations. The incentive applies to installations which enter into operation before the end of this year, and has a duration of 15 years.

The PV sector, on the other hand, has been supported through FiTs, with the rates varying through successive plans (Conto Energia). The most recent and fourth version (IV Conto Energia), announced in May 2011, once again redefined 20-year incentives for PV installations which commence operations before the end of 2016. (All of these schemes were preceded by CIP6 from 1992 to 1999. With a 15-year lifespan it will end soon, and thus doesn’t apply to new market entrants).

The incentive schemes have been costly: increasing from €1.7 billion in 2008 to €3.4 billion in 2010 and to an estimated €6.4 billion in 2011. Of this cost, 80% is the so-called A3 component, shouldered by the final consumer through electricity bills. Given the unpopular austerity measures announced by the new government, how long will the public continue to support this sector?

Notwithstanding these criticisms, however, the report outlines how the renewable energy sector has been popular as a cautious investor choice for project financing, second only to telecommunications in terms of the value of financing. The country’s two major banks, Unicredit and Intesa Sanpaolo, together account for a third of the total number of projects financed and just over 40 percent of the cumulative value of €50 billion financed until the first half of 2010. However, given the future uncertainty related to incentives, Attanasio believes there may be a shift towards leasing or corporate financing in the future.

Now all eyes are on the new government to see what will happen. The new Minister of Economic Development specialises in leading companies, most recently in banking. His counterpart at the Ministry of Environment was until recently the Ministry’s director general. He’s a specialist in workplace and public health who has been involved in environmentally sustainable initiatives throughout his career. They are described as having little in common except their first name: Corrado. But in the Russian roulette of Italian politics, just perhaps it will be enough.