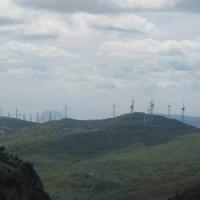 California, United States [RenewableEnergyWorld.com] Think of the renewable-energy market as an oligarchy, with a handful of countries making up by far a super majority. The top 10 wind countries, for example, represented a whopping 87.8 percent of the wind market last year, according to the Global Wind Energy Council (GWEC). And in solar, even just the top two markets — Spain and Germany — accounted for 72.9 percent of the total world market, with the top 10 making up 96.5 percent, according to the European Photovoltaic Industry Association.

Over the years, the industry has been expanding to new countries, dividing the market among a larger number of countries every year. But in an economic downturn, with price declines amid an oversupply of solar panels and wind turbines, that trend could be accelerating. And as more countries pass a variety of climate-change legislation, industry insiders predict that — in the coming years — the clean-energy oligarchy will become ever more democratic.

This change may be most visible among developing countries, such as China, which has doubled its wind market in each of the last four years. With 6.3 gigawatts (GW) of new wind-power installations and 12.2 GW of total installed capacity in 2008, the Chinese market was the second-largest — after the United States — last year. And the GWEC expects the market to double again this year, in spite of the recession. India was the third-largest wind-energy market last year, with 1.8 GW of new installations, and had the fifth highest total capacity, with 9.6 GW.

While the rest of the list of top wind markets comprise the usual suspects, including Germany, Spain, Italy, France and the U.K., the list of the fastest-growing wind economies holds some surprises. Among countries with at least 50 megawatts of annual wind installations, the five fastest-growing markets include: 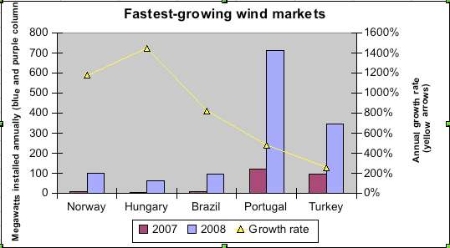 Steve Sawyer, secretary general for the GWEC, said he expects to see a boom in Turkey before the other emerging markets in Europe. The country’s rapidly-growing economy, combined with “no indigenous fossil-fuel resources to speak of,” tremendous wind resources and a government that’s greening up to enhance its bid to join the European Union, has contributed to the speedy growth of wind power in Turkey, he said. The country’s windiness and high electricity prices make wind projects competitive without any major subsidies, he added.

Brazil is likely to continue its strong wind growth — the country already has one of the cleanest electrical grids in the world, mostly dependent on hydro power, he said — while Chile and South Africa also have huge potential to be a bright spot in the next few years, Sawyer said.

Chile has few of its own energy sources, except hydropower, and in May, lost much of its natural-gas supply for several days when Argentina halted exports to deal with a supply shortage. That volatility helped attract substantial wind-energy investments, Sawyer said, adding that Chile could see several big projects come online by the end of this year or next year. One challenge, however, is that the Chilean market isn’t large enough to sustain a manufacturing industry, and will likely rely on Brazil to supply its turbines, he said.

Meanwhile, South Africa has far and away the world’s most progressive policies on climate change, Sawyer said. Under former president Thabo Mbeki, the government made a strong commitment to renewables, he said. The country in April announced a feed-in tariff of 1.25 South African rand (about US $0.15) per kilowatt-hour of wind. Sawyer said he hopes the new administration of President Jacob Zuma, who was sworn in earlier this month, will continue to support renewables.

Sawyer also sees Romania, Bulgaria, Hungary, Poland, Turkey, and possibly the Czech Republic, growing “very quickly.” In addition, Pakistan has installed its first commercial wind farms and has enormous growth potential, he said, but it will take “a good deal more political stability there for that market to really bloom.”

Meanwhile, the list of emerging solar-power markets has little in common with that of emerging wind markets. The fastest-growing solar markets above 10 megawatts of annual installations include

Jenny Chase, manager of the Solar Insight Service at New Energy Finance, said feed-in tariffs drove most of this growth last year. And she expects many of the emerging markets to keep growing. Chase forecasts that the Czech solar market will grow 48 percent this year to 80 megawatts, based on a generous tariff and relatively easy permitting, but said that financing will remain a challenge. 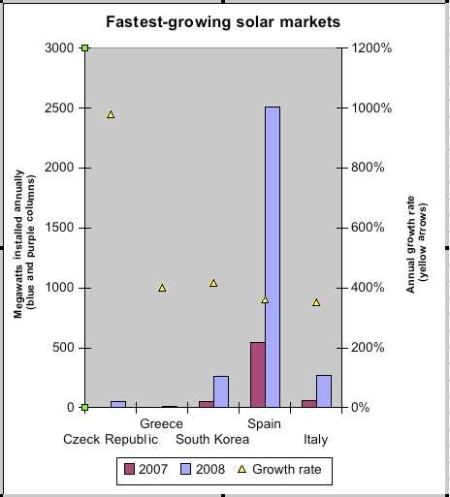 She predicts the Greek market will more than triple to 50 megawatts, in spite of an almost impenetrable bureaucratic process for applying for government incentives and permits. New legislation passed in January should speed up the process, at least “in theory,” she said. Chase also expects the Italian market to more than double to 671 megawatts, based on a strong feed-in tariff and a fairly sunny climate on par with Greece. Solar developers in Italy may struggle with financing, as with everywhere else right now, as well as some permitting bottlenecks — although nothing as bad as in Greece, she added.

Still, the outlook isn’t all sunny. Chase predicts that the Spanish and South Korean markets will decline this year. Spain’s shrinking market hardly comes as a surprise, as the country — which grew to 2.5 gigawatts last year based on a generous incentive, capped its incentive program at 500 megawatts this year. That represents an 80 percent drop in the market size, expected to put the Spanish market — which surpassed Germany to be the No. 1 market last year — back below Deutschland.

“Spain is currently trying to figure out how they’re going to pay their annual feed-in-tariff bill,” Chase said. “Spain is a bit of a disaster area and the government is probably trying to exclude as many projects as possible from the 2008 feed-in tariff.”

In South Korea, a similar feed-in tariff cap could slow the market, she said. Rumors suggest that large projects could be capped at as little as 50 megawatts, she added, although she has not been able to confirm the number.

Overall, Chase expects this to be “a shockingly hard year” for solar companies. The New Energy Finance forecast ranges from a bearish 5.5 gigawatts, which would represent a 5 percent fall from a 5.8-gigawatt global market in 2008, to a more bullish 29 percent increase to 7.5 gigawatts.

“We just cannot see as much demand as there potentially could be supply,” Chase said. “I think the solar industry will be really surprised at how low solar prices can go.” Low prices, of course, could be good for the industry in the long-term. “It will open up new markets that we haven’t even considered,” she said.

Any growth this year will have to come from a larger number of markets, she said. Many of the emerging markets have suffered from pent-up demand because, even if they wanted solar panels last year, anyone who had panels available sold them to Spain, she said. “Now manufacturers are interested in talking to them.”

In terms of deployment, wind power is about a decade ahead of solar, and that goes for the degree of market-share distribution as well, Sawyer said. “Solar is where wind was 10 years ago, with most of the market in two to three countries — all Spain and Germany, with a little bit in the U.S. and Japan,” he said. “In wind, it was all Germany and Denmark, and a little bit of Spain, and now that’s changed. We’ve got a dozen countries over 100 megawatts.”

Sawyer expects the top 10 wind markets to keep growing, continuing to capture the lion’s share of the world market for some time. But he forecasts the top 10’s market share will drop by about the middle of the next decade, when the industry comprises 20 or 25 major markets.

It makes sense that more developing countries are turning to wind power, he said. While the solar industry isn’t yet large enough to fulfill the electricity needs of rapidly developing economies at an affordable price, wind is, Sawyer argues. “Wind is competitive now, unless you have large quantities of cheap coal and no concern about the climate,” he said. “Wind is many times the cheapest and best option for adding large quantities to the grid in a very short amount of time.”