When Australia’s Solar Flagships program was first announced in May 2009, the program was met with much fanfare, heralded as the path to proving solar photovoltaics’ (PV) viability in the Australian market. Initially the program had a total budget of approximately A$1.5 billion and a goal of installing 1 gigawatt (GW) of solar electricity, split equally between PV and concentrated solar thermal (CSP).

The program soon ran into troubles, however, when in late-2009 the Federal Government announced it would scale back its initial Phase 1 goal of 500 MW (split equally between PV and CSP) by 2015 to 400 MW (250 MW from CSP and the remainder PV). Then, in May 2010 the government retracted some A$220 million of the program’s budget and stated that it might not proceed with Phase 2 of the program, but would make that decision after Phase 1 was completed.

One year later, in May 2011, a short-list of applicants was released, paired down from a total of 52 submissions: 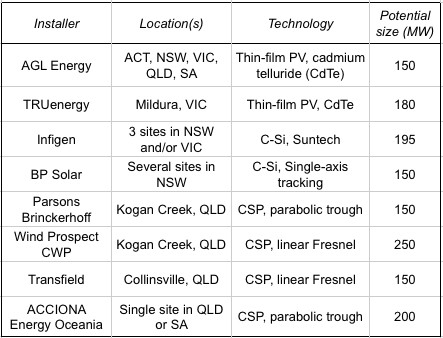 Of the short-listed PV projects, installed costs per watt ranged from A$3.00-6.00 and showed a variety of project types (multi-site and single-site) and proposing a variety of technologies: 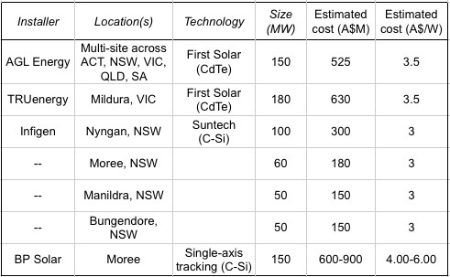 Finally, two years since initial introduction, the two consortia winners of Phase 1 were announced: a PV project made up of BP Solar, Pacific Hydro and Fotowatio Renewable Ventures; and a CSP project backed by Wind Prospect, Areva, and CS Energy. These projects were awarded government funds, both state and federal, that would provide almost half of their total funding required. The project backers then had until December 15, 2011 to secure power purchase agreements and financing for the remaining project costs.

Neither consortia was able to accomplish either of these tasks by the deadline, however, and both were beset by problems with members. BP announced it would no longer develop solar projects after Solar Flagships, and CS Energy withdrew from its consortium in February 2012. This has led the Federal Government to re-open Phase 1 of the program to its original shortlist, encouraging those companies to re-apply given the latest developments.

The trials and tribulations of the program show several things that continue to affect the Australian PV market:

— The Federal Government continues to demonstrate that it is unable to properly design or administer solar incentive programs. For the past several years, Australia has been caught in a boom/bust cycle as incentive programs are introduced, quickly exceeded, and then just as quickly canceled — only for a new program to be introduced soon after which follows the same pattern. The primary flaws of the Solar Flagships program, besides the program cuts in scope and budget, are an approval process that moved too slow to adjust to changes in the PV industry and a mechanism that focused too narrowly on a certain system segment. Since the program was announced, system prices have almost halved over two years, led primarily by decreases in module prices. And retail electricity rates have continued to increase so that large-scale PV systems now can produce electricity at levelized costs less than commercial or residential retail rates. The program also has been surpassed by other incentive policies, such as feed-in tariffs, which have proven to drive high levels of PV demand growth.

— Most Australian utilities remain hesitant to embrace power generated from solar PV facilities. Utilities across Australia have been slow to respond to increasing demand for solar PV systems, and many installations that were installed months ago are only now being connected to the electricity grid. Even as utilities have been slow to respond to customer requests for faster service for PV connection, many have been quick to blame rising retail electricity tariffs on increases in PV demand — even though updates to aging transmission and distribution grids are in fact the major factors in increasing costs.

Originally, the Solar Flagships program was meant to pave the way for more large-scale solar power development in Australia. Now, with not so much as one watt of the program installed, Australia has already reached that goal. In the PV sector there are several large-scale multi-megawatt projects under development, and one (a 10 MW project in Geraldton, Western Australia) scheduled to be completed in 4Q12. On the CSP side, a 44 MW project began construction in January 2012 and could be operating in as little as 12 months.

Ultimately, the Solar Flagships program will not really matter. The main reason is that long-term, due to a mix of positive economic and policy factors (such as the Renewable Energy Target and the Carbon Price Mechanism), the outlook for solar PV in Australia remains strong.