A recent article by John Peterson argued that electric vehicles will take us backward in our efforts to reduce greenhouse gas emissions and that today’s hybrid cars are more effective in reducing GHGs. Peterson’s commentary rests on recent research by Carnegie Mellon University regarding life-cycle emissions of various vehicle types.

I believe Peterson’s highly negative view of electric vehicles is unwarranted and inaccurate due to a number of reasons that I describe below.

I have some familiarity with these issues in that I represent the Green Power Institute (a non-profit policy outfit based in the Bay Area) at the California Public Utilities Commission in the electric vehicle proceeding R. 09-08-009. This proceeding is considering numerous issues related to utility rate design for electric vehicles and state policies for integrating potentially large numbers of electric vehicles into the grid in coming years. Our comments in this proceeding can be found here.

I also was the lead author of the Community Environmental Council’s 2007 report, A New Energy Direction: A Blueprint for Santa Barbara County, which examined in detail how Santa Barbara County could wean itself from fossil fuels and save substantial money at the same time. I wrote the report not only as a detailed blueprint for one county, but also as a template for other counties and regions contemplating similar goals. I wrote in that report that alternatives to driving, driving smaller vehicles, and relying on hybrid vehicles were the best short-term options for reducing fossil fuel use. However, in the longer term, electrification of our transportation infrastructure was the most promising path:

“To wean our region off fossil fuels, we will need additional options beyond driving smaller cars and hybrid vehicles, or using biofuels such as ethanol and biodiesel. The next generation of vehicles will provide a sea change in how we transport ourselves and goods by allowing electricity to become the primary transportation energy instead of petroleum.

We realize that converting our primary supply of transportation fuel from oil to electricity may seem to be a radical program, but it is a tremendously promising path. If we follow this path nationally, we could reduce or [even] eliminate our dependence on foreign oil in just two or three decades and dramatically cut back on our greenhouse gas emissions.”

I stick by these conclusions for the following reasons.

Peterson relies on a 2008 report by Carnegie Mellon University researchers Constantine Samaras and Kyle Meisterling. It is a little ironic that the slide that Peterson shows in his article, with similar data to Figure 1 below, is entitled “Electrified transportation has large GHG benefits with low-carbon electricity,” and yet Peterson states immediately after showing this slide: “the graph suggests that there is no meaningful air quality advantage to plug-in vehicles.”

Figure 1 below shows that under the posited “low carbon scenario” of 200 g/CO2 in the electricity sector, electric vehicles would produce about half the emissions of hybrid cars. “PHEV 90” represents a plug-in electric vehicle that can run 90 miles on batteries alone, which, while not possible today, will very likely become possible in a few years as battery technology improves. CV refers to conventional vehicles and HEV to hybrid vehicles. Samaras and Keisterling state (p. 3173): “Under the low-carbon scenario, large life cycle GHG reductions (51–63% and 30–47%, compared to CVs and HEVs, respectively) are possible with PHEVs.” 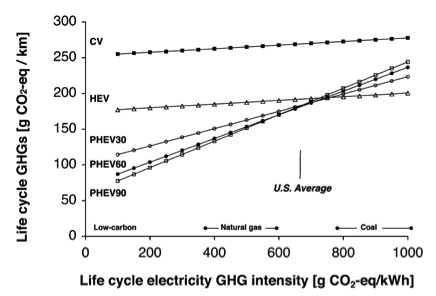 The Shift To Renewables and Natural Gas

The key to this debate, then, is how electricity sector GHG intensity will change over time. Are emissions going up or down? The Energy Information Administration stated in a very encouraging report from early 2010:

“The fuel mix and associated carbon intensity of most sectors have tended to be very stable over time.  However, in 2009, the carbon intensity of the electric power sector decreased by nearly 4.3 percent, primarily due to fuel switching as the price of coal rose 6.8 percent from 2008 to 2009 while the comparable price of natural gas fell 48 percent on a per Btu basis.  The carbon content of natural gas is about 45 percent lower than the carbon content of coal and modern natural gas generation plants that can compete to supply base load electricity often use significantly less energy input to produce a kilowatt-hour of electricity than a typical coal-fired generation plant.  For both of these reasons, increased use of natural gas in place of coal caused the sector’s carbon intensity to decrease.”

The accompanying chart tells us even more (note that the electric power sector emissions started dipping in 2006): 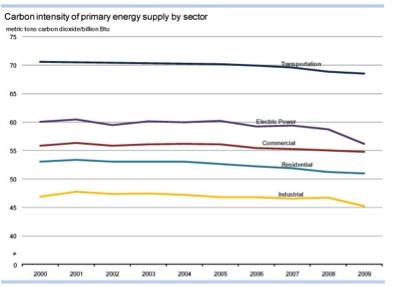 The takeaway point here is that the United States is at the start of a long-term shift away from coal toward renewable energy and natural gas, with nuclear power probably slowly diminishing also. I’ve written recently about the very encouraging decade-long growth trend of wind and solar power in the U.S. Wind and solar power have grown 30-40% annually in recent years and solar grew 100% in 2010 – despite a still-weak economy (wind power growth dropped substantially, unfortunately).

Perhaps as importantly, we have seen a significant drop in natural gas prices in the last couple of years driven in part by increased supplies from oil shale. I personally don’t support the use of more natural gas as a sustainable long-term solution, particularly not from oil shale, for various environmental and economic concerns. But I do recognize, as the EIA wrote in the passage quoted above, that there has been a significant shift away from coal and toward natural gas for many power plants that can switch fuel swhen economically advantageous to do so. And this trend also looks to continue for some years.

As a result of these and other similar trends, the U.S. economy has seen a massive 41% reduction in greenhouse gas emissions intensity in recent years (Figure 3). GHG “intensity” refers to the amount of emissions per dollar of GDP and is a measure of the efficiency of an economy. Electricity sector emissions haven’t seen as large a reduction, as the previous figure showed, but we can reasonably expect to see much larger reductions over the longer term if the trend witnessed in the last few years continues. 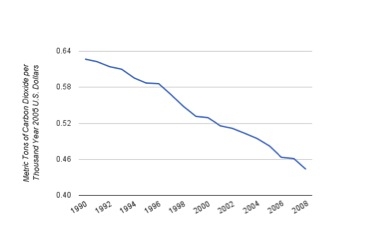 An even more important mistake in Peterson’s critique is his reliance on average national emissions from the electricity sector. In fairness, the Samaras and Meisterling report makes this assumption also, but it is a very poor assumption when considering the real world policy implications of the issues they analyze. It is very clear, based on adoption rates for hybrid cars and other high-efficiency vehicles in recent decades, that electric vehicle adoption will be far higher in states that have far lower electricity sector emissions than other parts of the country.

A student of mine, Christian Del Maestro, completed an excellent paper in 2009, still unpublished, that examined the regional impacts of electric vehicle adoption. His conclusions regarding the national average are congruent with those from the Carnegie Mellon study, but he also looked at state-level emissions. He found that all but a few states yield significant GHG benefits when compared to HEVs and CVs. And some of the most populous states, like California and New York, will result in electric vehicle emissions less than half of those for the 2009 Prius because of the relatively clean electricity mix in these states. 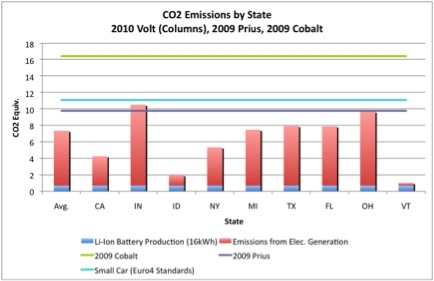 More generally, GHG reductions are not the only benefit of electric vehicles. The most significant immediate benefit for owners is that they’re so dang cheap to run. A “fill up” for an electric car will cost about $1.50 – a massive benefit compared to $30-50 for a gas fill up in a typical car. This is the economic rationale for paying higher up-front costs for electric vehicles.

From a policy perspective, another benefit is far more important: the ability of electric vehicles to wean us from reliance on petroleum as the primary transportation fuel. As I noted in A New Energy Direction, electrification of the transportation sector is the most promising long-term option we have for getting away from petroleum. Whether we worry about petroleum dependence because of national security concerns or peak oil, or other reasons, it is clear that electric vehicles present a far larger benefit in this aspect than CVs or HEVs because the latter types of vehicles run, of course, on petroleum. I’ve written many times at this website about the threat of peak oil and I will be presenting a comprehensive update in the coming weeks.

We need to get very serious about reducing our reliance on petroleum and other fossil fuels. Electric vehicles should be – and very likely will be – a major part of any successful effort to do so.

Tam Hunt is president of Community Renewable Solutions LLC, a company focused on community-scale wind and solar energy; he is also a Lecturer on climate change law and policy and renewable energy law and policy at UC Santa Barbara’s Bren School of Environmental Science & Management.