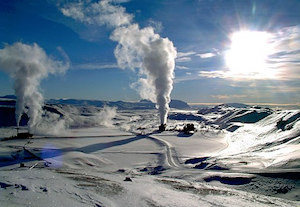 Like many towns across Alberta, the landscape around Hinton is a pincushion of oil wells. At the bottom of some of the deeper wells, temperatures can reach upwards of 120 degrees Celsius, and that geothermal heat could be about to spur the town on to its next energy windfall.

A plan is underway to pump water up from deep underground, capture the heat it brings to the surface, then re-inject that water into the ground. The captured heat could warm a dozen municipal buildings or even eventually provide electricity.

“That’s attainable, that’s not a huge technical challenge. The question is at what cost,” Jonathan Banks, a research associate in geoscience at the University of Alberta, told DeSmog Canada.

The town recently got $1.2 million in federal and provincial grants to explore the feasibility of the project, known as a Front-End Engineering and Design, or FEED, study. That should be complete by the end of the summer.

“If the FEED study shows that the project is viable…we could start building the system in the fall of 2018,” Banks says, cautioning that there are a number of unknowns, such as an uncertain regulatory process.

Like many Canadian jurisdictions, Alberta currently has no regulatory framework for geothermal power.

The project would be a first for Canada. That has led to apprehension among residents, who tend to be conservative in their approach to energy.

Nelson himself started as a critic of the project. Working for the Chamber of Commerce — some of whose members were concerned about the town wasting money — he set about trying to research the project.

“I came up with a little different of an answer than I think people were hoping for,” he says. He now chairs a committee on alternative energy in the community.

“I’m a bit of an evangelist,” he laughs.

A 2016 preliminary study suggested that the cost of a geothermal heating system for the town could be recouped in about 16 years against business-as-usual heating costs.

Nelson concedes the number “could be a little optimistic” at $10.2 million due to the number of hurdles associated with it being the first of its kind.

But he maintains that the benefits of the project extend beyond the lifetime cost (despite insisting that, as a municipal project, for it to be recouping any revenue at all is a plus). He says the spinoff benefits could be in new businesses setting up shop in Hinton due to the cheap, long-term heating contracts the town would be able to provide.

“I think we’ll be surprised at some of the different uses that other people think of,” he says, offering as an example a greenhouse for the fledgling cannabis market. He also points to Boise, Idaho, which uses its similar system to heat an alligator farm.

In Klamath Falls, Oregon, a brewery makes use of the heat. The town’s partner in the project, Calgary-based Epoch Energy, has visited some of those sites to survey their systems.

Related: Six Natural Resource Projects in Canada That Got it Right in 2017

“Seeing it as a tool for diversifying our economy, that’s the biggest winner for it,” Nelson says.

Two hours away on the other side of the B.C. border, Valemount is also looking at building a “geothermal industrial park” that would make use of a relatively accessible pocket of heat they suspect to be just underneath the town. That could produce electricity, heat water for a brewery, warm a greenhouse and even keep the sidewalks ice-free.

Nelson explains that the American projects also have other lessons to offer Hinton: they charge differently for the use of the power. In Klamath Falls, users are charged directly for the heat. In Boise, users are charged by the volume of water they use, encouraging innovation around efficiency.

Winning over skeptical residents, both Nelson and Banks agree, has been a process of continual engagement and education.

“It doesn’t take a lot to connect with people, and just plant that seed,” Nelson says.

A big part of why Nelson thinks the oil-friendly residents should welcome geothermal to town? It all runs on the same infrastructure and knowledge as the oil and gas industry, making it an excellent way to make use of existing oilfields and some of the workers who have been hit by low oil prices.

“If it ever really takes off on a large scale in Canada, it will be because of oil and gas,” he says.