More
Home Baseload Bioenergy Are Biofuels Ready for a Comeback? 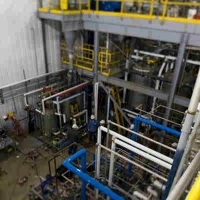 New Hampshire, United States [RenewableEnergyWorld.com] The Cambridge, Massachusetts headquarters for Joule Biotechnologies are very discreet. The only thing marking the office from every other pale brick building on Rogers Street is a large “83” printed on a tinted glass door – hardly the type of labeling one might expect from a company claiming to have the answer to cheap, abundant, renewable fuels that don’t require fresh water or farmland to grow.

But Joule CEO Bill Sims is not exactly the loud type, either. Walking around the company’s lab, he nonchalantly points out a room where biologists are testing a secret fuel-producing organism that he believes will soon rival conventional oil in abundance and cost.

“This is where a lot of the magic happens,” he says in a matter-of-fact tone, sounding more like an ambivalent tour guide than the CEO of a company with a potentially game-changing technology.

Make no mistake, Simms and his team of biologists and engineers are very excited about what Joule has to offer the world of biofuels: An organism that bathes in sunlight and brackish water, eats CO2 and directly perspires “SolarFuels” like ethanol, biodiesel and petroleum-derived chemicals.

Joule has also developed a “SolarConverter” that will be the breeding ground for these still-unnamed organisms. The converter looks kind of like a solar-photovoltaic panel, but instead of generating electricity, it generates liquid fuel. Joule’s engineered organisms live inside the panel, which is filled with recycled non-potable water. CO2 and sunlight are pumped in, the organisms start photosynthesizing and then secrete usable fuel products.

According to the company, the ethanol and biodiesel created in these converters need very little processing to meet fuel standards for tanks, pipelines and engines. To top it all off, Sims says that Joule will be able to produce 20,000 gallons of ethanol and 13,000 gallons of biodiesel on one acre of land per year. With those yields, a barrel of Joule’s ethanol could cost around $75 to produce and a barrel of biodiesel could cost around $50. 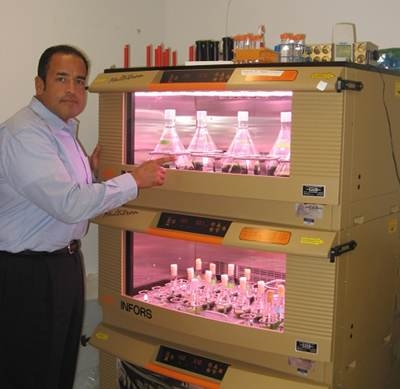 “This puts Joule in the position to a provide path to energy independence — plenty of availability, cost-competitive, no requirement for precious resources like fresh water and agricultural land — it’s a terrific solution,” says Sims, pictured left at his lab in Cambridge.

This process has been under development for two years. Sims was hired this summer to take Joule out of stealth mode, secure financing and help the company build out a pilot-scale plant by the end of 2010 and a commercial facility by 2012. That’s no easy task, considering the state of the credit markets and how new and untested the Joule concept is.

“There’s frankly some disbelief because this is a little bit like science fiction to many – and that’s fine, we’re not offended by that,” says Sims. “We realize that’s the type of response you should get if you have such a transformational, game changing idea that’s so new to the world. But as we’ve explained the progress we’ve made…and the steps we’ve taken to make sure our ideas are valid…investors realize that this is something that is very special.”

Joule offers an interesting test case for the biofuels industry. Entering the scene after a dismal year and a half for ethanol and biodiesel producers, the company offers a sliver of hope for an industry trying to pull itself out of a rut. Without having a pilot plant built and without independent verification of the fuel, the company is essentially asking potential investors to “trust us.” However, if Joule can pull off what it claims it can do, the biofuels industry may be in for quite a jolt — as long as economic conditions will allow.

Biofuels typically get a lot of attention as gas prices go up in the summer driving season. This year was different. After the love affair with biofuels throughout 2006 and the bitter attack on biofuels in late 2007 and 2008, there was a general slowdown in interest from the press moving into 2009. As oil prices dropped, it became much more difficult to produce ethanol and biodiesel at a profit. Production facilities were scaled back or closed, many companies went bankrupt and investors looking for big payouts went searching for other markets. There has been a general malaise in the industry since.

“I don’t think we’re in a crisis…but we’ve really hit a plateau,” says Rick Kment, a fuel analyst with DTN Research. “We have seen significant movement in the ethanol industry that has shifted the players involved…and impacted industry growth.”

According to the National Biodiesel Board, two-thirds of biodiesel facilities in the U.S. have closed their doors, unable to profitably produce fuel. At the beginning of the year, Archer Daniels Midland reported that 20 percent of ethanol production capacity had been shut down as well. Many of those ethanol facilities are now back at partial or full production, but there are very few new facilities being built today.

The much-anticipated next-generation fuels industry is also challenged. Many analysts doubt that ethanol producers will be able to hit the targets for cellulosic fuels set by the Renewable Fuels Standard because of slowed investment and delays in ramping up commercial facilities.

But recently there are signs that the ethanol industry is coming out of this period of stagnation. U.S. ethanol production will total over 11 billion gallons this year, a 20% increase from last year. Oil companies have moved into the market, buying up cheap assets and keeping production facilities running. And now that oil prices are slowly climbing back up, plants are able to break even or generate a small profit.

“Things are certainly better today than they have been in the last year and a half,” says Jeff Broin, CEO of the largest U.S. ethanol producer, Poet. “We are operating successfully. I would say that most of the financial problems are decreasing significantly and we are getting back on track.”

Poet operates 26 ethanol plants around the country with a capacity of more than 1.5 billion gallons per year. Being a large, vertically-integrated company, Poet made it through the last year in much better shape than other producers. The company is working on expanding its corn-ethanol refining capacity and plans to finish construction of a 25 million gallon-per-year commercial cellulosic ethanol plant in Iowa by 2011.

While still not a commercial reality, cellulosic ethanol will help Poet maintain its position as an industry leader. With potentially-competitive start-up companies like Joule Biotechnologies making big (and still unverified) claims about low-cost, environmentally benign biofuels, Poet has every reason to throw a lot of effort behind cellulosic fuels.

But right now, Poet’s Broin isn’t worrying much about companies like Joule. He’s more concerned with the U.S. government hindering the development of cellulosic and other next-generation fuels. While that might seem counterintuitive, given how much support Washington has thrown behind biofuels, Broin says that the government’s contradictory stance on renewable fuels could hold back the industry from a new phase of growth coming out of the downturn.

“There is no market for cellulosic fuels if the blendwall is not increased. The blendwall is a rule that is in contradiction to a law,” he says, adding that it discourages investors from entering the next-generation biofuels space.

The EPA will likely revisit the blendwall this December, but for now, investment in advanced biofuels remains low. According to the analysis firm New Energy Finance, only 3% of investment in renewable fuels has gone into non-food based fuels.

The poor economy hasn’t helped matters. Many investors are working on refinancing loans for existing plants and not really thinking about how to put money into new, riskier projects. There have also been a number of technical delays at plants across the country. The government is requiring producers to pump out 100 million gallons of cellulosic fuels by next year; however these problems will prevent the industry from producing much more than a third of that target.

DTN Analyst Rick Kment doesn’t think that investors have pulled out for good. With available loan guarantees, tax credits and a possible increase of the ethanol blend wall, the industry has a variety of tools to lure private investment. Also, because there are so many cheap assets up for grabs, oil companies have moved aggressively into the space. This could mean that a large amount of capital moving into next-generation fuels will come from traditional oil companies rather than venture capital or private equity firms.

“There is a lot of interest in this industry. Petroleum companies have used the downturn in the economy to get an ownership in the production side portion of their ethanol needs. And I think as the economy moves out of a recessionary period, we’ll see a lot more movement” says Kment.

Oil Companies Get Onboard

Just down the road from Joule Biotechnologies in Cambridge, Carlos Riva sits in his office overlooking the Charles River. Riva, a gregarious man who talks about ethanol with wide-eyed excitement, is president of the cellulosic ethanol company Verenium Corporation.

Verenium makes concoctions of enzymes extracted from different organisms and uses them to break down sugarcane bagasse for ethanol production. There are no scientists in lab coats walking around this office – only executives in suits. The company’s research labs are in California and its first cellulosic facility is in Louisiana.

Looking out at the cars and trucks zipping around the city beyond the river, Riva contemplates a big move for the company: BP, one of the largest energy companies in the world, has agreed to work with Verenium to build out ethanol production facilities in Florida. The agreement is one of many announced by oil companies like BP, Shell, Exxon-Mobil and Valero over the last 9 months. [For more on this topic, see Big Oil Bets on Biofuels by RenewableEnergyWorld.com contributor Jennifer Kho.]

“This is a trend,” he says. “We need companies like this getting into ethanol production to create a commercially viable industry. This is a natural fit for petroleum companies.” 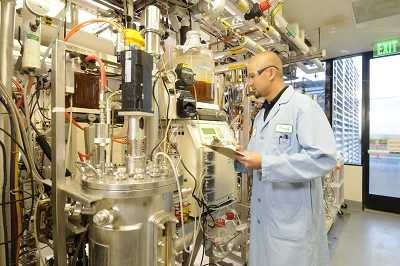 Under the partnership, BP will invest $90 million in Verenium and assist in the construction of a 36 million-gallon-per-year production facility. BP will also have access to Verenium’s proprietary enzymes. Without a partnership with a company like BP, raising capital for the construction of a commercial facility would be incredibly difficult, says Riva.

“Even if [the credit markets] were in good shape, for a first-of-a-kind technology, it will always be difficult to finance projects. But we feel pretty good about where we stand…We’re benefiting tremendously from their process engineering and large project delivery skills.”

With investors nervous about the technical viability of the industry, adding oil company expertise to the mix helps companies attract capital. Companies like BP can provide the technical know-how that many start-ups lack. Once a few commercial facilities are built out, investors will be more willing to finance additional plants.

Government loan guarantees are also key to assuring investors; Verenium is waiting on a loan guarantee from the Department of Energy for its 1.4 million-gallon-per-year demonstration facility in Jennings, Louisiana. DOE has promised to streamline the application process in order to more quickly move the industry toward commercial scale.

Riva believes that these developments are signs that the industry has great potential, despite some of the current gloom. If he’s right, companies like Verenium, Joule Biotechnologies and Poet will soon be battling it out for a market worth hundreds of billions of dollars.