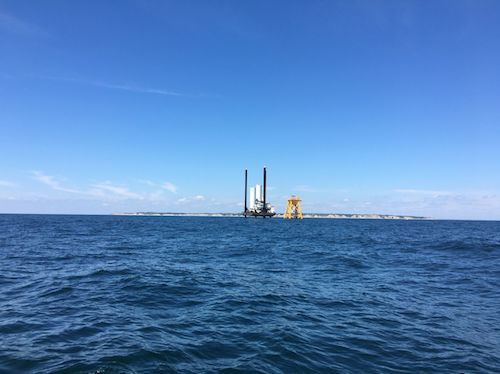 It was one-part chance and ten-parts experience that enabled Louisiana-based oil and gas liftboat operator Montco Offshore to get the contract to help install the turbines, blades and towers on the recently completed 30-MW Block Island Wind Farm. Chief Technology Officer Joe Orgeron, who’s family founded the company 48 years ago to serve the oil and gas industry, explained that he got involved in the project all the way back in 2009 when Deepwater was looking for help getting core samples from the bottom of the ocean.

“I just so happened to have men with one of my liftboats in Atlantic City in the summer of 2009,” he said.

Montco was doing “borings and corings” work for another organization when Orgeron got a call from Block Island Wind Farm developer Deepwater Wind who needed help doing the same work and needed it quickly.

Orgeron said the phone call went like this: “’we [Deepwater] got the geotechnical analysis people all lined up — you obviously have the boat with the core unit already on it so before you sail all the way back to Louisiana we’d really like you do the job.’”

Fast forward to 2014, once the foundations were ready to go, Orgeron said he put in a bid to help install the jacket foundations but was outbid by a company based in Philadelphia. (Montco’s location in Louisiana adds travel costs for jobs in the U.S. northeast.) However, when the jacket foundation installation didn’t go according to plan, Deepwater called Montco again and Orgeron brought his crew up to Rhode Island for the second time last summer to help finish that job.

Orgeron probably shouldn’t have been surprised when he got yet a third call from Deepwater last November asking him if he could spare two vessels for the final installation of the turbines, nacelles and blades this summer to finish the wind farm.

Montco was hired this summer to bring two vessels and supply the crew that would be needed to haul the blades and towers for the turbines from the port in Providence, R.I., to the site off the coast of Block Island. A much larger boat, Fred.Olsen Windcarrier’s jack-up vessel, Brave Tern, actually lifted the towers, nacelles and blades into place in addition to transporting the 6-MW GE Haliade nacelles from France to the U.S. (see the two boats working together in the photo below.) 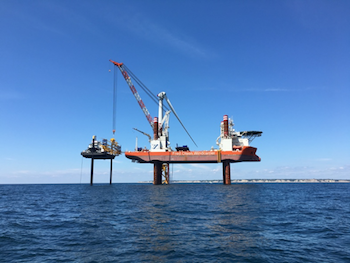 Because of a U.S. law known as The Jones Act passed in 1920, Brave Tern was not allowed to touch U.S. soil, which meant that it needed to be stationed out at sea. The act requires that all goods transported by water between U.S. ports be carried on U.S.-flagged ships, constructed in the U.S., owned by U.S. citizens, and crewed by U.S. citizens and U.S. permanent residents. This requirement meant that it was up to Montco to bring the equipment from the port to the site.

“There were a lot of restrictions on what the Fred.Olsen could and could not do as a foreign-flagged vessel,” said Orgeron, adding that his company is toying with the idea of building a vessel the size of Brave Tern.

From Oil and Gas to Wind

Orgeron said there are a lot of opportunities for crossover of assets and expertise between the offshore oil and gas and wind industries. He said in the Gulf of Mexico where he works, there is a complete network of “vessels and dock facilities and people and trucks” that work together 24/7 for the hydrocarbon business.

“It’s a well-tuned machine,” he said.

The same doesn’t exist for offshore wind in the U.S. because it hasn’t been needed to date. “It [building an offshore wind farm] just needs to happen more often, maybe a couple more times,” said Orgeron, who believes that a U.S. offshore wind industry will evolve over time.

As far as his crew is concerned, they can’t wait to get back to work on a wind farm, said Orgeron. He said he’s been asked three times about the next possible project and that his team is jockeying for position hoping to be aboard the next time around.

“Making their paycheck in their normal work environment — aboard the boat, that is — but in a completely different location was just a really, really very fascinating and engaging thing for them,” he said. “They enjoyed it quite a bit.”

What is next for Montco? Orgeron said he’s come full circle and is now doing some coring and boring work for other offshore wind developers who are hoping that their wind farm will be the second. There are at least 20 offshore wind farms in very early stages of development off the coast of the U.S.

“It’s important to sit in on the permitting seminars that talk about the difference between a state wind farm and a federal wind farm project and all of the entities that are involved,” he said. He added that it’s also important to learn what financiers and project developers are up against.

But the benefits of using an experienced offshore oil and gas company to help build an offshore wind farm are also pretty clear. Orgeron said that oil and gas industry has the assets and right mindset for this work — “that 24/7, 365 mentality to do the work in all forms and fashions” and not let bad weather or high waves stop you from completing the job.