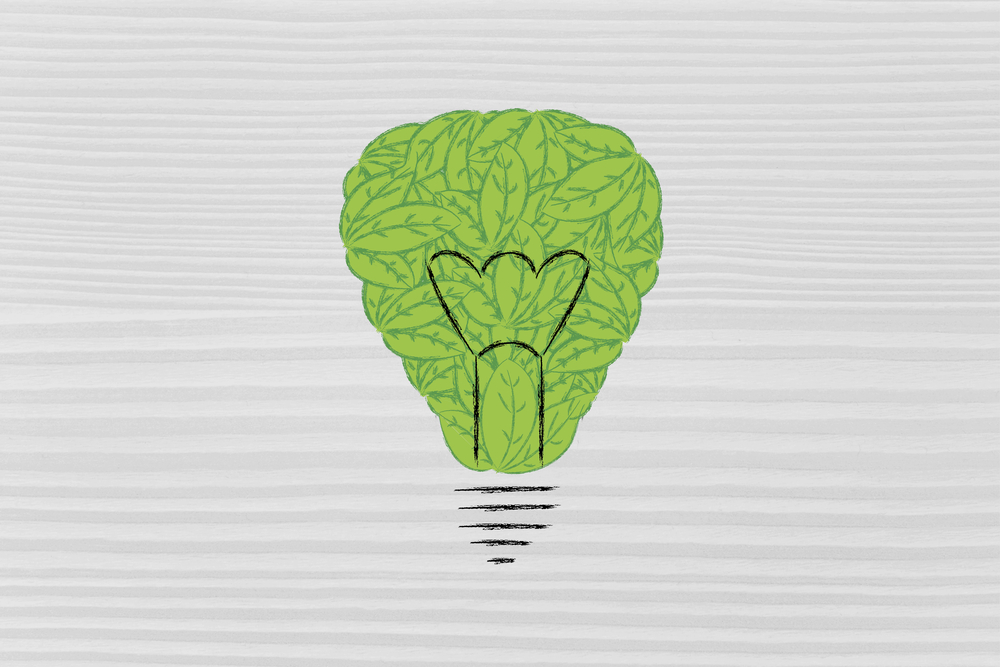 A number of companies around the world are developing novel technologies in an effort to grab a slice of the global renewable energy market.  Although many of these technologies are simple incremental improvements to established technologies such as solar PV, some are focused on shaking up the sector with more innovative and futuristic designs.

The Dutch Windwheel is a concept for an eye-catching 174-metre tall building in the port city of Rotterdam designed to act as a platform for a wide variety of groundbreaking renewable energy technologies.  The design, developed by the Dutch Windwheel Corporation in partnership with Doepel Strijkers Architects, Meysters and BLOC, consists of two three-dimensional rings constructed from steel and glass, which are placed on an underwater foundation in such a way that they appear to float. 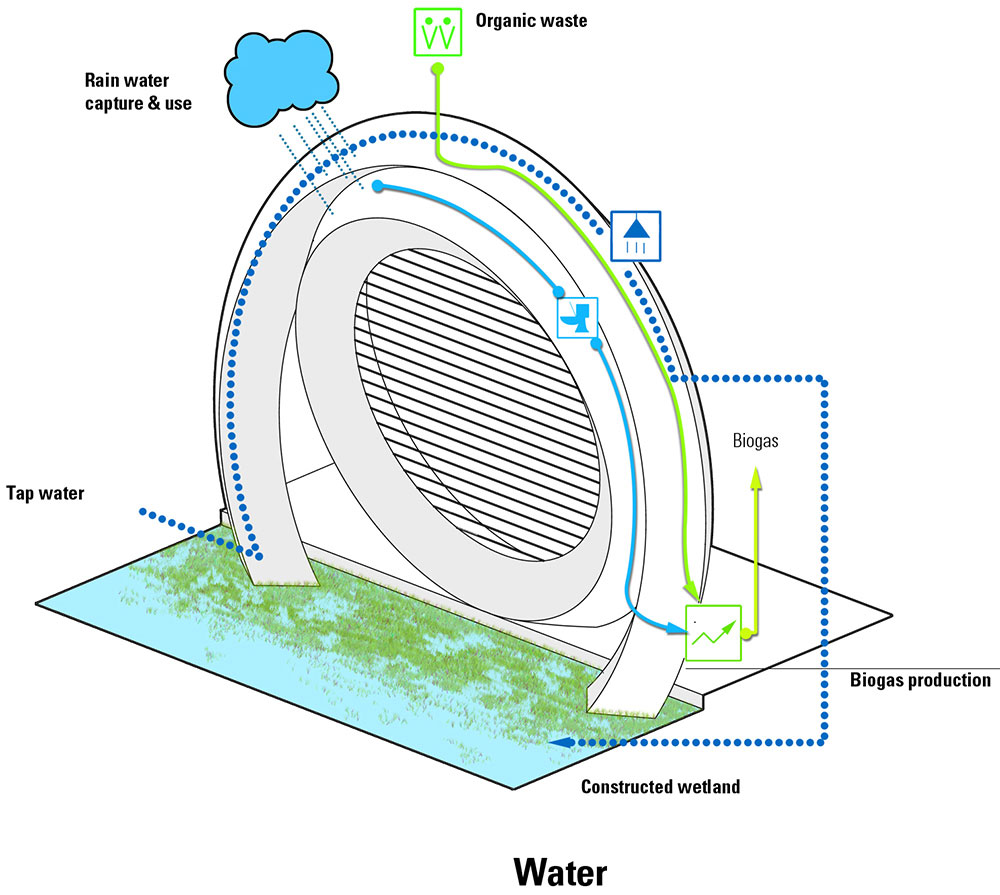 The outer ring houses about 40 rotating cabins on a giant rail system — whilst the inner ring will be constructed from a novel wind turbine that converts wind energy into electricity via a framework of stationary steel tubes.

A consortium from TU Delft and Wageningen University developed the technology, known as EWICON (Electrostatic Wind Energy Converter).  It uses high voltages to produce electrically charged water droplets in a series of parallel horizontal elements to generate an electric field.  As wind forces the droplets against this electric field, the converter is charged and creates a direct current (DC).  According to Lennart Graaff, Partner and Founder at BLOC and the Dutch Windwheel Corporation, although the EWICON technique has undergone extensive laboratory testing, this will be the first time the technology is used in a building.

“The upscaling and optimization of the technique — as well as the selection and development of other renewable energy innovations — will be part of our R&D path, which runs from 2015 to 2017,” said Graaff.

The building itself is slated for completion in 2025 — with the finalisation of the design concept scheduled to take place over the next two years, followed by preparations for physical development between 2017 and 2021 and construction from 2021 to 2025.  Although coy about the exact details, Graaff does reveal that the Dutch Windwheel team are talking to several organisations — including energy corporations, research institutes, developers and investors — about their involvement in the construction process.

“The idea was born when we were discussing that Rotterdam is booming, but could really use an iconic attraction.  From the start we wanted to combine that with our ideas for a 100 percent sustainable building, a showcase for clean technology,” said Graaff.

“We wanted to make a future landmark and a landmark for the future.  And it fits Rotterdam, the Dutch city of the future — whereas Amsterdam is the city with a rich history,” Graaff added. 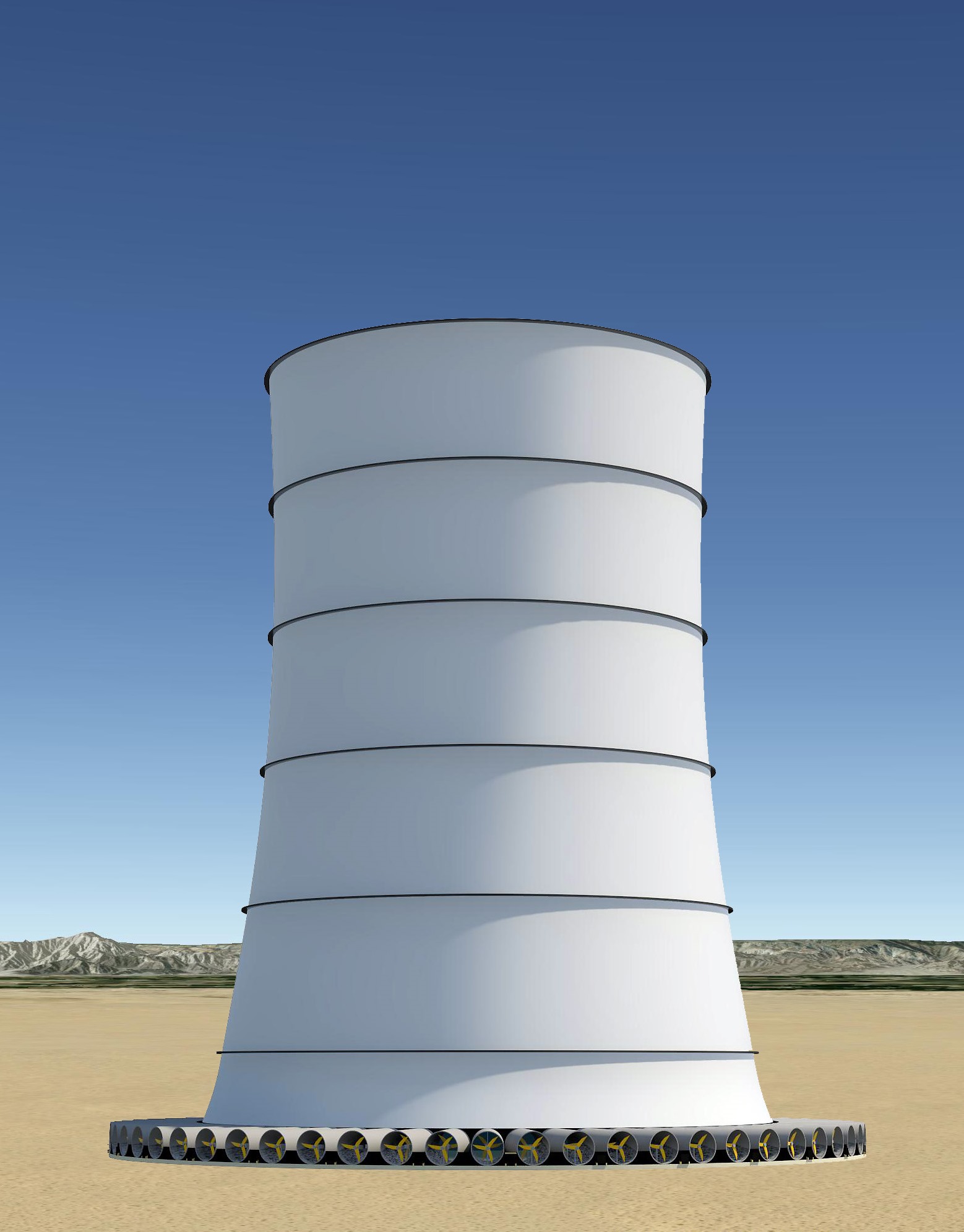 Meanwhile, a Maryland-based company is currently developing a hybrid solar and wind energy technology that is designed to harness the energy generated by the downdraft of air created when water is introduced to hot dry air within an innovative tower structure.

The so called Solar Wind Energy Tower is a tall hollow cylinder featuring an integrated water injection system — with a cluster of turbines housed in wind tunnels near the base.  The Tower works by using a series of pumps to transfer water to the injection system, where it is transformed into a fine mist that is sprayed across the entire opening.

The water is then evaporated and absorbed by hot dry air contained within the Tower — making the air cooler, denser and heavier than the surrounding warmer air outside the Tower.  This cooler air then falls through the cylinder at speeds “up to and in excess of 50 mph,” before being diverted into the wind tunnels at the bottom of the Tower where it is used to move turbines that generate electricity.  In areas enjoying favourable atmospheric conditions, the exterior of the Tower can also be built with what the company calls ‘vertical wind vanes’ that are used to produce supplemental electric power.

REW has previously covered this technology, and according to Ronald Pickett, chairman and CEO at Solar Wind Energy Tower, the science behind the technology “has never been an issue,” and a small pilot facility has already been built in Spain.

However, Pickett admitted that the necessary size of a full-scale Tower has so far prevented construction on a utility or economically beneficial scale, and reveals that the company is currently actively pursuing strategic partnerships with “various entities, including utilities, sovereign nations and independent power producers,” to finance project costs and “share in the operational, financial and environmental benefits.”

“The only challenge is getting the first tower project to the shovel-in-the-ground stage,” said Pickett. “We currently have two Tower project sites under our control that only need to obtain Power Purchase Agreements that meet our lender’s approval — one in San Luis, Arizona and another in San Luis Rio Colorado Sonora in Mexico.  A licensee is also pursuing a tower in Chile [and] we have potential licensees in other areas investigating sites.”

“The main advantages are the Tower’s low cost of installed capacity and the resulting low cost of power, which competes with the cost of fossil fuel facilities,” Pickett added.

Elsewhere, French research and development company NewWind has devised a novel wind energy device inspired by the look and feel of trees.  The Wind Tree is the brainchild of entrepreneur Jérôme Michaud-Larivière, who designed the technology following a daytime reverie in which he noticed leaves rustling in the breeze, and considered whether he could design a tree-shaped wind turbine to generate electricity.

Topping out at some 36 feet tall, each Wind Tree (L’arbre a Vent in French) features 72 silently spinning vertical axis micro-turbines designed to resemble leaves. These turbines have a 3,100-watt capacity that can either be fed into buildings via a main switchboard or hooked up to the grid using an inverter.

According to NewWind, the main aim is to capture more gentle winds in urban environments — as low as two metres per second — which they claim can make each turbine operational for more than 280 days each year.

Although still at an early stage of development, the company already has plans for a high-profile prototype installation, which is priced at €29,500 (US$36,500), in the Place de la Concorde in Paris this spring in an affort to raise awareness of renewable energy in the city.