More
Home Baseload What Next for the EU’s Renewable Energy Targets?

Europe has been working towards legally binding renewable energy 2020 targets instituted by the European Union (EU) 20-20-20 package since 2009. The EU is now proposing further renewable energy targets through to 2030.

As we discuss in the our study ‘Renewables Support Mechanisms Across Europe’, we consider the way in which the targets to date have influenced the renewables sector, and how the new targets may play out.

The RES Directive of 2009 set the highly challenging and ambitious target that 20 percent of energy consumed in the EU by 2020 will be produced by renewable energy sources, with mandatory targets for individual Members States as follows: 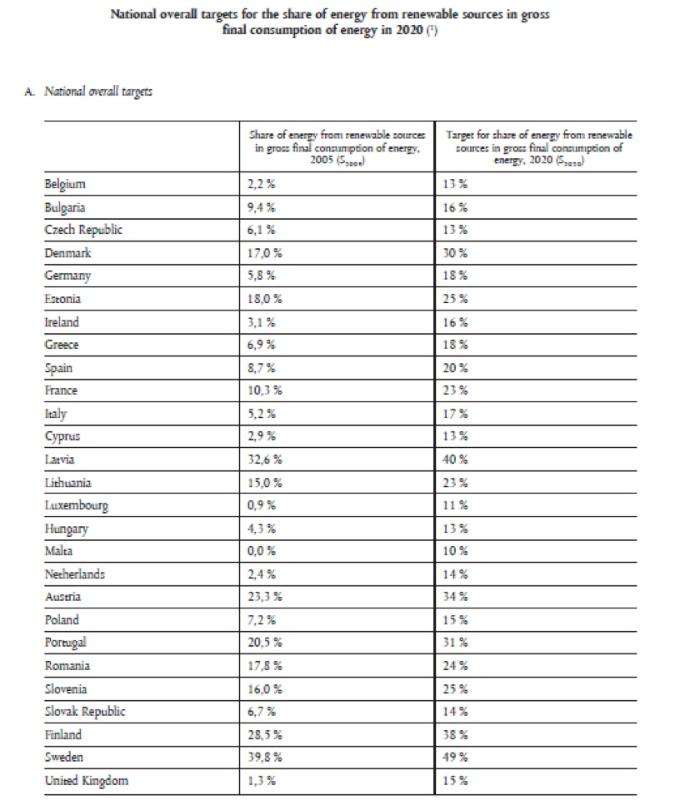 The European Commission is consulting on a new 2030 framework for climate and energy policies, including on the role of renewable energy targets in such a framework. This Consultation reopens the

debate on the appropriateness and effectiveness of renewable energy targets and the right level of such targets. The prospect of further EU-imposed mandatory targets has been met with a mixed reaction, with France and Germany indicating their support, whereas other Member States, including the United Kingdom (UK), opposing the proposal.

A recent Commission report concluded that the RES Directive and its targets “spurred on” investment in renewable energy, despite a number of challenges going forward. Despite doubts among some, there is statistical evidence that this is the case and anecdotal evidence of the political momentum and public profile raising that such legally binding targets can have. Targets are of course not the only (or possibly main) driver and other complementary national policies (such as the UK’s Climate Change Act 2008) or EU-wide measures (such as the Large Combustion Plant Directive) have also been significant.

In the Consultation, the Commission recognises that there are longer term energy and climate policy objectives, for example the “Energy Roadmap 2050” which states that renewable energy should be at 30% by 2030 in order to meet its 2050 goals. Renewable energy targets help to maintain the momentum towards even more ambitious longer term goals for decarbonisation.

Despite these arguments in favour of imposing further renewable energy targets on Member States, there are a number of issues which such targets simply fail to address. The 20-20-20 package aims to significantly decarbonise energy production in the EU. However, some argue that renewable energy targets fail to recognise the role that other low carbon alternatives, such as storage, nuclear and CCS, can play in achieving that objective. Those opposed to such targets argue that this focus on one area is inflexible and often results in perverse incentives, e.g. expensive investment in generation capacity (and associated networks) at the expense of energy reduction which may be more cost effective for both the industry and consumers.  We have seen many developers consider that such sentiments have led to an increase in regulatory risk in recent years and targets, whether at an EU or a domestic level (as proposed for the Energy Bill in the UK), are seen as an important mitigant.

We have seen a rise in concerns over whether that the EU is making itself globally uncompetitive by a push for renewable investment that is driven by targets rather than commercial price signals. Critics suggest that investment in (and government support of) renewable energy often results in increased energy prices for consumers. Consumer affordability is a high profile issue (partly due to the EU-wide economic difficulties) and whether or not the issue of cost is significant, some Member States are resisting further 2030 targets partly on this basis.

The RES Directive does not set out how a Member State should go about meeting the targets, which has led to a range of approaches across the EU. At its extreme this has resulted in “legislation arbitrage” where investors pile into one temporary hotspot after another, moving on as the support regimes are amended to curb the perceived gold rush. This has led to an increase in regulatory risk even for long lead time renewable energy projects that require significant commitment and upfront financial investment by developers. Such projects in particular are essential to achieve scale and lower costs and require long term certainty and stability of returns for investors. This fragmented and inconsistent renewable energy market is also at odds with the aims of the single internal energy market.

A major criticism of many of the support schemes is that they fail to reflect the pace of change across the renewable energy sector, such as the reducing cost of some technologies, which may distort the energy market by overcompensating renewable energy generators. This is based on a false premise as the majority of renewables projects incur the bulk of the costs upfront and there is limited ability to take advantage of future reductions in capital costs. However, there would be benefit in a more consistent EU-wide approach. A recent Commission report announced plans to produce guidance on renewable energy support schemes, but any legal EU-wide harmonisation of such government incentives is not yet proposed.

It is also unclear how the EU will deal with Member States that miss their existing 2020 renewable energy targets (which some undoubtedly will). Pursuing infraction proceedings would be time-consuming and of limited benefit for both the EU and Member States. However, if the EU does little or nothing then any further legally binding targets may be seen as aspirations only.

Renewable energy targets are not a panacea for achieving the EU’s energy policy aims.  The EU recognises this and has indicated that if 2030 targets are introduced they may be structured differently to address some of these factors.  Nevertheless, the 20-20-20 package of targets is currently being implemented and, by virtue of this, it is harder for Member States to argue against the principle of targets themselves.