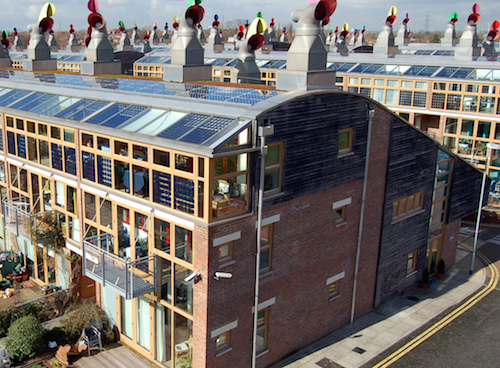 Damian Carrington reported in The Guardian on June 7 (UK solar eclipses coal power over month for first time) that solar PV plants in Great Britain generated more electricity than coal in May.

The news has been bouncing around the blogosphere for days as another example of how far renewables have come. However, it took a Canadian economist working in Germany, Toby Couture, to observe the most salient fact in all the hoopla—that the cloudiest, wettest place in Europe has solar.

Think about it for a second.

There shouldn’t be any solar—PV or otherwise—in Britain. It’s not sunny southern California after all.

According to neoclassical economics, there should be no solar in Britain. No. It has always been argued by economic purists that you only put solar where it’s sunny. You could put solar in Spain, for example, but it would be better if you put solar in Morocco. No, better yet, don’t put the solar in Morocco, because it’s even better to put solar in Saudi Arabia.

Successive governments in Nova Scotia, for example, have argued for a decade now that it doesn’t make any sense to put solar PV in the province because, well, they don’t have any solar.

Yet Nova Scotia has the same if not better solar resource than much of Britain.

From a neoliberal perspective, the news of solar PV’s meteoric growth in Britain is an unmitigated disaster. It contravenes everything students have been taught in Econ 101 for the past three decades.

David Ricardo—and Margaret Thatcher as well—must be rolling over in their graves. Britain turned its back on one of its native son’s most profound principles: the law of comparative advantage. It is this “law” that leads directly to the justification for globalization. It is this “law” that dictates you develop first the resources that are cheapest—wherever that may be—such as solar PV in Saudi Arabia.

It’s this principal that leads so-called renewables advocates in North America to suggest, falsely, that it’s foolish to develop solar PV in Canada (the Great White North to many Americans) when we could cover the desert southwest with solar plants instead.

It’s this reasoning that leads Nova Scotia to say, “We don’t have solar here” when in fact they do.

Since Margaret Thatcher, Britain has been a neoliberal paradise—a laboratory for privatization and deregulation. Accordingly, there should be no solar in Britain.

But there it is—more than 10,000 MW of solar PV in Britain—nearly as much as sunny California (13,000 MW). And Britain installed all that solar within five years, while California has been developing solar for three decades. Very inconvenient facts indeed.

Some economists, such as Couture, take a more nuanced view. The law of comparative advantage is not the monster here, he says, but rather treating it like dogma is.

Couture suggests an example of how adherents of comparative advantage go off the rails. Just because it might be cheaper to build airports in the flat desert regions of Nevada, because land is cheaper and the ground needs less work to pave, that doesn’t mean that all airports in the country should be built in Nevada. Nevada might have comparative advantages in terms of siting and building airports, but that matters only up to a point, because ultimately we need airports closer to where people live, not necessarily where they are cheapest to build. The same applies for solar. We need solar—and wind and biomass and so on—where people live.

Now that solar and other renewables have become so cost-effective, Couture goes on to say, the presumed benefits from comparative advantage become less and less relevant. We can afford to put renewable generators where we most need them and not necessarily where there are the most renewable resources.

The lesson here is a far more fundamental principle of economics than the law of comparative advantage: If you want something, and you’re willing to pay for it, you will get it.

If we want massive amounts of solar, wind, and other forms of renewable energy to combat climate change—and if we want it where the people are—we will need public policy to do so.

Britain’s remarkable accomplishment with solar PV has once again shown that with the right policy anything is possible—even solar energy in the cloudy, wet British Isles.

This article was originally publised on Wind-works.org and was republished with permission.