More
Home Baseload What a Waste! The Big Problem of Heat Loss in UK Cities 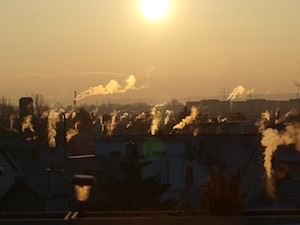 It’s encouraging to see U.K. policy makers getting to grips with tackling heat loss, which is one of the biggest sources of energy waste in our towns and cities.

Heat network expansion is among 50 policies proposed by the U.K. government in its recently published Clean Growth Strategy. This document sets out proposals to decarbonize the U.K. over the next decade and beyond, to achieve ambitious legally binding targets on CO2reduction.

Energy Minister Claire Perry MP said that the creation of more heat networks would help to reduce heating costs, as well as minimizing energy waste. This commitment builds on the government’s existing support for district and community heating via its £320m Heat Network Investment Project, which is providing capital investment in new schemes until 2021.

The Clean Growth Strategy also gives backing to the Association for Decentralized Energy’s (ADE) Heat Network Task Force, which is exploring ways in which government and industry can work collaboratively to deliver a market framework in which heat networks can compete for subsidy-free investment.

A vision for decentralized heat networks is also supported by the recently published draft London Environment Strategy. Mayor of London Sadiq Khan sets out a vision for a Scandinavian-style clean city-wide heat network, together with more community and district heating schemes. These networks will capture and use the heat that’s squandered by conventional energy systems.

Nearly three quarters of the energy used in London’s homes is for heating and hot water, which is largely provided by individual gas-fired boilers in each home. The proposed expansion of communal heating networks would replace individual boilers and instead pipe hot water directly into homes from larger, much more efficient, shared boilers, which could be fueled by renewables or energy from waste.

London’s 3.4 million homes are responsible for around one third of London’s total greenhouse gas emissions. Tackling heat loss via the introduction of communal heating, alongside improving domestic energy efficiency, will have a big impact on the city’s carbon footprint and its ambitions to become zero carbon by 2050.

Decentralized heat networks have a huge role to play in delivering greener, more affordable and reliable energy supplies. Economies of scale mean that one central boiler plant is more efficient than individual boilers. Energy savings are typically 25 percent compared to individual building gas boilers and up to 50 percent compared to electric heating.

The wasted heat from conventional energy production in remote power stations is well documented. Research led by ADE highlighted the problem of poor energy productivity, largely due to wasted heat. ADE estimates that 54 percent of energy used to produce electricity is being wasted via conventional power production, which relates to £9.5 billion ($US12.5 billion) per year.

Incredibly, the heat we waste is equal to or above the amount we use each year. In theory, all we need to do is move the heat from where it is being wasted to where it is used. This is simpler than it sounds, but there are some very credible models of heat recovery in practice.

By generating energy close to where it is consumed and capturing and utilizing the heat, as in district energy schemes, high productivity is achieved. Larger heat networks can utilize large scale renewables, but combinations of energy sources can be used, including traditional gas fired boilers, biomass, CHP and low-grade heat technologies, such as ground source heat pumps, together with energy from waste. The advantage of heat networks is that they can be extended to incorporate some of the more innovative renewable heat sources, such as fuel cells and solar thermal.

This versatility to combine diverse energy sources increases reliability and creates a push towards greater decarbonization in the future, as new technologies emerge. By serving different types of customers, such as both commercial and residential users, heat networks can balance the supply and generation of heat to respond to different energy demands across both the daytime and evening. This high utilization of heat increases efficiency.

Playing Catch-up with the Scandinavians

In the U.K., there are already an estimated 1,750 heat networks, but this is a tiny fraction of what’s possible. In Denmark, 55 percent of homes and up to 95 percent of buildings in urban areas are served by heat networks using 98 percent renewable fuels, with far higher efficiency and satisfaction rates than seen in the U.K. so far.

Large Swedish cities, such as Malmo and Stockholm, have reached the point of almost completely decarbonized heat, with over 90 percent of their heat being delivered by heat networks superior in their efficiency and delivering low or zero carbon heat.

The U.K.’s slow adoption of heat networks is partly due to a historical poor image based on the experience of outdated technologies and largely coal-based systems installed decades ago, which have not been adequately maintained.

Happily, history is rewriting itself and there are many more examples of best practice in district and community heating. New organizations such as the Heat Trust and Heat Network Task Force, of which we are founding members, are driving progress and raising standards. One example of this is The Heat Networks: Code of Practice for the U.K., which has been produced as a joint project between CIBSE and the Association for Decentralized Energy (ADE). It provides a blueprint for excellence in heat network development

Smart metering systems are also transforming performance and driving energy efficiency in compliance with Heat Network (Metering and Billing) Regulations 2014. In particular, the use of advanced pre-payment smart metering technologies is helping residents to budget while saving energy.

This article was originally published by Switch2 and was republished with permission.