More
Home Baseload Bioenergy Were These 2 Men the 1st to Bring Clean Energy Microfinancing to...

Key solutions have been solutions that allow people to get a solar system (or other renewable energy system) and pay it off over time, whether through loans, leasing, or something else. In the US, about 80% of residential solar systems are currently obtained through a solar leasing contract. In developing countries, similar models have helped bring solar lighting, solar power, biomass power plants, small hydropower systems, and wind turbines to people without electricity or with only dirty, expensive electricity.

There are many companies and organizations bringing clean power to people in this way, but I often wonder, which was the first? Who first decided to do this? I doubt the answer could even be tracked down, but I think it’s possible that Dipal Chandra Barua and Muhammad Yunus were the first movers in this realm. 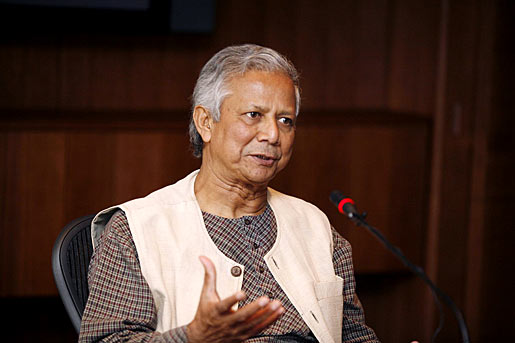 Mr Barua and Mr Yunus founded microfinance institution Grameen Bank way back in 1983. “This institution lends micro credits to poor people in Bangladesh without the requirement of classical securities. For its success in fighting poverty, it received the Nobel Peace Prize 2006,”World Future Council writes. But it was Grameen Shakti, founded in 1996, that took the work Grameen Bank was doing to the next level and enabled the deployment of much more solar, biomass, and other clean technologies in Bangladesh.

I’ve already written about Grameen Shakti, so I won’t go on about it at length, but the nonprofit has now brought 1,417,617 solar energy systems to homes in Bangladesh. It has also delivered 28,762 biogas plants to Bangladeshi communities and 814,562 clean cooking stoves to Bangladeshi homes. It has 1,268 branches covering every district in Bangladesh.

Mr Barua, the first winner of the Zayed Future Energy Prize, is also the Chairman & CEO of the Bright Green Energy Foundation. The foundation’s site states:

“Bright Green Energy Foundation (BGEF) is one of the leading organizations to provide pollution free green energy to the underprivileged rural people of Bangladesh through innovative financing. BGEF is creating numerous green jobs all around Bangladesh by promoting woman entrepreneurs and green technicians. BGEF is devoted for the expansion of Solar Home System, Bio-gas Plant & Clean Cooking stoves in rural Bangladesh.

“Bright Green Energy Foundation (BGEF) also serves poor and low income rural households with energy efficient clean stoves, which reduce fuel consumption by up to 50%, indoor air pollution and green house gases. BGEF not only saving poor households money, but also improving their health and the environment in which they live in by giving better future for their children.”

In other words, it is doing essentially the same thing as Grameen Shakti. Both BGEF and Grameen Shakti are doing world-leading work bringing solar energy and other cleantech to millions of people without electricity or who have been using dirty electricity. As the chairmen of these two organizations (Mr Barau of BGEF, and Mr Yunus of Grameen Shakti), these two pioneers are enabling more progress than ever via a model they pioneered decades ago. Kudos to Mr Barau and Mr Yunus!