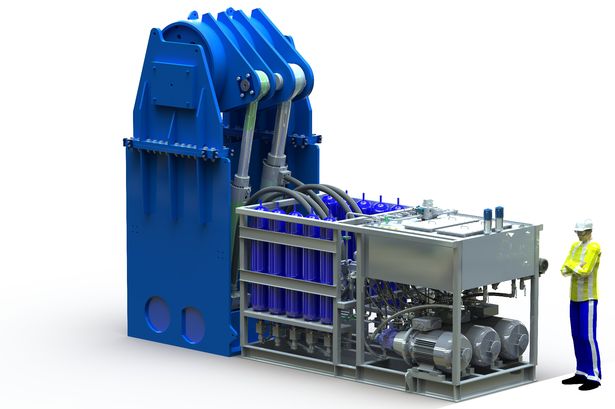 The prototype has already been built and is undergoing tests at the largest technical university in Germany, the Institute for Fluid Power Drives and Controls at RWTH Aachen University.

WavePOD, which comprises a drive train, cylinder frame and power take off, has received its new funding support from the Scottish government’s Marine Renewables Commercialization Fund, managed by the Carbon Trust. Investors think the new funding should enable the team to complete the MHK scale-prototype testing and deliver the design and specification for a full-scale prototype WavePOD.

Aquamarine said it thinks WavePOD can lead to standardized subsea units. They hope the unit can be attached to a variety of different wave energy machines and convert the movement of the device into electricity, one of the major hurdles facing the industry.

Researchers have been generating electrical power since October and the WavePOD’s drivetrain is using real-life hydrodynamic data from Oyster 800 to ensure the power take off is experiencing exactly the same loads it would encounter at sea.

The Oyster 800 wave energy machine is installed at the European Marine Energy Centre in Orkney and first produced electrical power to the grid in June 2012.

Commenting on the new investment, Aquamarine Power Chief Executive Officer, Paddy O’Kane said, “The WavePOD project addresses head-on one of the major challenges in the wave energy sector – how to convert the motion of a wave machine into electricity, both reliably and cost effectively.

“From the outset we have worked with Bosch Rexroth to ensure WavePOD will be applicable to a wide range of technologies. The very welcome involvement of Carnegie Wave Energy and the investment by Wave Energy Scotland means we can now take our plans on to the next stage.

“We have already generated extremely positive results from our 10th-scale prototype in Germany and we are now in an ideal position to build on this success.”

Fergus Ewing, Minster for Energy, the Scottish Government said, “Wave Energy Scotland is running the biggest technology program the wave sector has ever seen. Therefore I am delighted to see the first contracts being awarded to technology developers. Scottish businesses are involved in the overwhelming majority of the projects and this is testament to the number of innovative companies operating in Scotland.”