Edinburgh, UK- Portugal is a very unique country and I felt like I got a good idea of how things work there, despite my short stay. The main reason for my visit was to attend the conference entitled, “Wave Energy in Portugal in an International Context,” hosted by the Wave Energy Center at the Electricity Museum in Lisbon. The purpose of this conference was to foster partnerships between international developers and Portuguese investors. 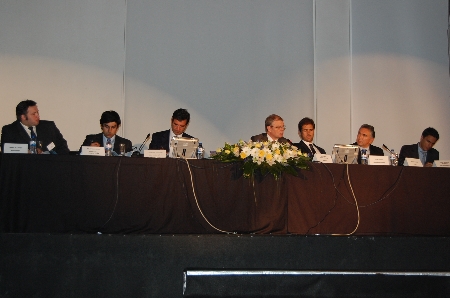 A panel of Portuguese investors and companies, answering questions from the floor at the conference, “Wave Energy in Portugal in an International Context,” hosted by the Wave Energy Center in Lisbon, Portugal. The utilitiy companies were interested to hear the progress that has been made in testing and development from international wave energy companies.

The Portuguese are certain that the necessary breakthroughs in device development are not going to come from within their borders. They willingly admit that they do not have the expertise or resources in hydrodynamics or coastal engineering. But, they do have one of the most energetic coasts in the world. All along the coast, waves are breaking that have traveled many of thousands of miles, gaining energy as they move across the Atlantic. An area off the coast just north of Lisbon has been designated as the “Pilot Zone,” which will serve as a testing ground for ocean energy companies. Right now, this area remains to be lines drawn on a map, as the government has been stalling to allocate the necessary money due to an impending election. Portugal is an attractive market for marine energy developers and utilities because most of the population lives on the western coast of Portugal. Most importantly, where there are people, there are power lines. The infrastructure is easily accessible and devices can be grid connected cheaply.
Already, Portugal won the race to be the first country with a commercial-scale wave energy device in the water. I have been warned by many people in the industry not to call this a commercial wave energy farm because it was not built to last for 25 years. In fact, just a few days after installation the three 750 kW Pelamis “snakes” encountered some problems due to a sinking flotation device. However the floats were switched out and the devices began to transmit electricity to the shore. A short while later, the joints of the devices were worn out because of too much lateral as well as vertical motion. The company decided to tow the snakes to shore to perform the maintainance work. Unfortunately, while the devices were ashore, Babcock and Brown (the majority holder of the project) fell victim to the financial crisis and all work on that particular project ceased. Today, the devices still sit in port.
In Lisbon, a sort of ménage à trois has developed in the wave energy community. Three different research groups, each with a slightly different agenda exist in Lisbon, two of them right across the street from each other. The Wave Energy Centre is a non-profit group helping companies get prototypes and full scale devices into the water; INETI is a national laboratory that researches renewables among many other things; IST is a public technical university. None of the groups truly collaborate with each other mainly due to personal reasons among the top researchers. Each group expressed regret and remorse for the lack of collaboration, but none willing to take the first step. I talked to scientists from each group and each time I heard the same thing. Alas, they say, it is the Portuguese way. We are stuck in this situation and it would be too costly to try to rearrange things. Better to wait it out and see if collaboration occurs naturally. 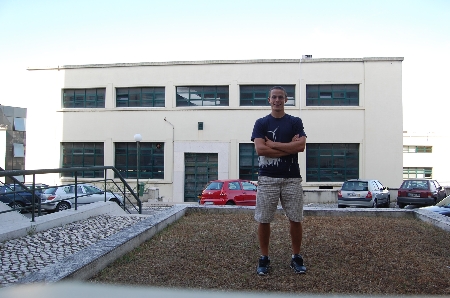 I’m standing in front of the mechanical engineering building at the Instituto Superio Técnico in Lisbon, Portugal. The wave energy group here was founded by Dr. Antonio Falcão in the late 1970’s.

It is not clear yet what the ramifications will be due to this lack of collaboration. However, the Portuguese are worried they will miss the marine energy boom. They want to attract foreign developers now to the Portuguese coast so they will set up manufacturing centers in Portuguese towns and cities. Soon, they fear, they may have to import wave energy devices, just like how they now import foreign oil. The Portuguese government is at a pivotal moment in their quest for energy security for their country. I hope that Portugal can use their coastline to woo foreign investment into their country now, which will pay big dividends for them in the future.

Again, if you have any questions or comments about my project please check out my website: www.waveenergyineurope.com. I’d love to hear from anyone who is interested in marine renewables!