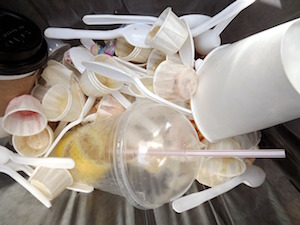 News has arrived from Denver (the company) and the UK (the project and partners) that SynTech Bioenergy will build what it terms “a revolutionary clean-energy plant in the United Kingdom capable of carbon negative operation.”

Carbon negative generally means that some of the resulting carbon is sequestered — possibly in biochar, or can be plastics. Ultimately, if you think through the carbon cycle, a ton of carbon gets pulled from the atmosphere to make the biomass in question — some is returned to the atmosphere when the energy is produced through combustion, but some remains in the ground via sequestration. Hence, every cycle the biomass is pulling down more carbon than is released in combustion – hence, carbon-negative.

Those concepts don’t usually take into account indirect or direct land-use change impacts, which plague the calculations of emission reductions from renewable fuels.

But you get the idea.

Why Is Carbon Negative Important?

Ultimately, it would be helpful to pull carbon faster out of the atmosphere. The ocean’s ability to absorb carbon is getting challenged — already there’s so much CO2 in the ocean that it’s starting to resemble sparkling water.

On the other hand, there’s some comfort in the idea that when the planet is inundated with water by climate change, all we have to do is toss a whole bunch of Coca-Cola syrup into the sea and we’ll be drowned in soda pop.

Things go better with Coke. And now you know what they’ll serve at the real, live Last Chance Saloon, one of these days. Just sayin’.

More on the Project and Technology

This project represents a first-of-a-kind commercial, advanced thermochemical conversion-based energy from waste facility. SynTech is partnered in the project with Britain’s Energy Technologies Institute, a public/private partnership between energy and engineering firms Rolls-Royce, BP, Shell, Caterpillar, EDF and the UK Government. The ETI is providing a £5 million ($6.35 million) matching investment.

To be known as SynTech Energy Centre, Ltd., the 1.5-MWe facility will feature SynTech’s proprietary FluiMax technology. The system will convert sorted and processed municipal solid waste into continuous and uninterrupted clean, renewable, electrical power and heat. The project will consume about 40 tons per day of processed MSW and produce enough electrical power to supply 2,500 homes year-round and enough heat to supply over 1,000 of those homes and a local senior center.

FluiMax is billed as “an extraordinarily clean technology that vents nothing to the atmosphere other than clean exhaust from the engine generator set.”

Ultimately, it’s gasification — the syngas leads to power, that’s it in a nutshell. But there’s a twist — it’s a new gasifier for Syntech — because it’s going to be the Frontline Bioenergy system, that can be used ultimately to produce power, or fuels.

Frontline is a developer of air and oxygen-blown, pressurized, bubbling fluid bed gasifiers, proprietary hot gas filtration and other gas conditioning technologies that are well-suited for biomass and waste-to-energy projects.

It’s a widely admired technology with a rocky financial story. We reported here that in 2013 the U.S. Department of Energy announced up to $17.7 million in grants to four pilot-scale biorefinery projects aimed at military-spec hydrocarbon fuels. Frontline BioEnergy was one. We had reported that in 2011 Frontline BioEnergy completed its Series B financing, not much since, and that after suspending operations in 2010 for lack of funds.

Frontline BioEnergy agreed last March to be acquired by SynTech Bioenergy, LLC. The addition of Frontline gasification technologies to the SynTech portfolio will enhance the ability to deliver medium and large-scale carbon-negative, sustainable clean energy facilities producing uninterrupted baseload power, heat and liquid fuels. The larger-scale capabilities of Frontline’s technology will dovetail with SynTech’s other technologies, which are more appropriate for smaller scale projects.

In the biomass sector, the company is best known for its BioMax systems, which convert biomass feedstocks into syngas, methane, carbon dioxide, water vapor and the balance nitrogen. CPC’s proprietary gasification technology enables the producer gas stream from the BioMax to have extremely low-level of tar, such that the systems use no water for gas clean up and produces no wastewater that requires treatment before disposal, unlike most gasification systems.

BioMax is a technology offered by Community Power Corp, a subsidiary of SynTech, and you’ll find it used on a wide array of small projects that utilize a wide range of feedstocks.

Ultimately, the syngas can also be used to produce liquid fuels — presumably for high-value markets such as California.

Reactions from the Stakeholders

Wayne McFarland, SynTech’s CEO, said, “This project represents a new paradigm in and for the future of distributed, continuous and uninterrupted clean energy. SynTech projects provide solutions to numerous pressing energy, environmental, economic and social issues on a global basis. Our mission is to deliver positive global impact by providing clean-power, heat and fertilizers and advanced, clean, drop-in liquid fuels from the many costly and problematic waste streams that plague our planet.”