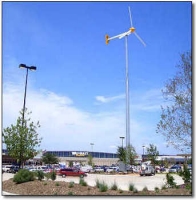 McKinney, Texas [RenewableEnergyAccess.com] Wal-Mart, the largest retailer in the world, unveiled a new store outside of Dallas, Texas that could revolutionize how the company builds and powers their stores. The experimental design combines a host of renewable energy technologies including numerous solar PV arrays, two, small wind turbines, a bio-fuel boiler to recycle and burn recovered oil from store operations and a nearly endless list of energy-saving and sustainable design principles.

The project represents an industry first for big box retailers. For the next three years, the company has arranged through the Oak Ridge National Laboratory and other partners to carefully analyze every aspect of this experiment in sustainable, big box store design. The results, if satisfying, could profoundly change the way Wal-Mart, and even the retail industry as a whole, designs, constructs, and manages buildings and their energy use. “We see it as a next step in evaluating the impact we leave on the environment as we look toward smart growth and sustainability in the building of our new stores,” said Mike Duke, executive vice president and chief executive officer of Wal-Mart Stores – USA. “This store will contain many of the best resource conservation and sustainable design technologies currently available to minimize the use of energy and natural resources.” Duke added that sharing the results of the store’s experiments with the rest of the retail and development industry could turn low-volume, rare technologies like solar and small wind power into industry standards. In terms of renewable energy applications, there are subtle projects and then there are unmistakable ones. The most obvious is visible from miles away, serving as a fitting beacon for the experimental store: a 50 kW wind turbine from Bergey Windpower, rising up 146 feet in the air, and prominently deployed in the store’s parking lot for all to see. The turbine is the Bergey’s newest model, the result of a collaboration between the company and the Department of Energy’s Advanced Small Wind Turbine Program. One of the main goals of the program was to design small wind technology that performs well in low wind situations. Mike Bergey, founder and President of Bergey Windpower, believes they have achieved that with their new 50 kW model, the XL 50. The unit will produce its maximum output of 50 kW at wind speeds of around 27 miles per hour, but more importantly, will still produce appreciable power at wind speeds as low 5 miles per hour. There’s also second, smaller Bergey 1 kW stand-alone turbine installed to power a Wal-Mart sign. This is the first commercial installation of Bergey’s new XL 50. Even pricing on the unit has yet to be finalized. While Bergey is pleased with the unparalleled opportunity to have Wal-Mart help kick off their new turbine, he’s also a big fan of the other aspects of the store. In short, this the real deal, according to Bergey. This isn’t a corporate window dressing effort designed for solely for PR purposes. “All the way along there’s been an emphasis on the engineering side,” Bergey said. “They have thrown out things that might have been left in other projects.” For example, Wal-Mart had originally considered an on-site fuel cell power unit but backed away from it after careful consideration. Even the most die-hard renewable energy aficionados agree that energy efficiency trumps the application renewable energy systems. Every kWh of energy saved, is one that doesn’t have to be bought from the local power grid or used from on-site renewable energy projects. Nowhere is this more clear at the new Wal-Mart facility than in the cooler section indoors. Typically, refrigerated display cases are an open-air style that allows the refrigerated air to pour out, putting enormous energy demands on the cooling units for the building. In the experimental store, glass doors have been added to the display cases in an effort to reduce this load. And according to Bergey, that alone, will save 600, 000 kWh — six times the energy load the 50 kW wind turbine is expected to produce in one year. With careful attention paid to energy efficiency, the project managers were also strongly inclined to use solar energy as well. As the retail industry’s largest solar demonstration to date, the McKinney store is incorporating both crystalline and thin-film panels in numerous applications. At 59 kW total, it’s not the most aggressive application solar but it’s an effort just the same. Sections of the store, such as the garden center, the curtain wall, and the entry vestibules are covered by panels for a total of five different grid-connected solar arrays.

Wafer-thin cells embedded in glass allow electrical generation and a measured level of natural lighting to filter in. A similar approach is repeated in the store’s entry vestibules. The store’s south-facing facade offers perhaps the most obvious application of solar with 34 kW of polycrystalline PV mounted vertically at the top of the building creating a signature “blue stripe” that runs the length of the store and is obvious to all customers. There are also a few smaller, standalone solar PV systems powering signs on the property. “We trust the results will be so impressive, that the store will set an example for retail operations nationwide,” according to Steve Cohen, Project Manager at RWE Schott Solar. “In the future, we expect that an increasing number of retailers will follow Wal-Mart’s lead and incorporate ‘environmental sustainability’ into their store designs.” Solar Integrated Technologies also provide some solar for the roof-top section above the Tire and Lube center. The last application of renewable energy-type projects is the recovery and use of cooking oil and waste automotive oil. In most Wal-Mart Supercenters, cooking oil used to fry foods and waste engine oil from the Tire and Lube Express is collected and recycled off-site. In this new store, however, cooking oil and waste engine oil are burned in a bio-fuel boiler to generate heat that is then directed into the heating, ventilation and radiant floor heating systems. And there’s a world of sustainable design applications going all throughout the facility including bioswale, pervious pavement, an experimental urban forest, various applications of water conservation, attempts to mitigate “heat island effect,” a wildflower meadow, xeriscaping, high efficiency internal lighting and many recycling efforts (a more detailed explanation of all the new aspects of the store are can be seen at the link following the story). Depending on the results of the next three years of analysis and careful observation, Wal-Mart’s corporate experiment could greatly bolster public knowledge and acceptance of renewable energy and sustainable design, and create a paradigm shift in how big retailers, and other companies approach building their facilities and using the world’s increasingly valuable and limited energy supplies. “It sends a signal that this could be a significant business,” Bergey said. “The world’s leading retailer wants to make their buildings have a much lower environmental footprint. This sends the signal that it’s the way you can be more competitive.” For more information see the following link.