The revised tariffs were determined by Vermont’s Public Service Board (PSB) after opening a docket in mid September 2011 and issued its order in late January 2012.

Unlike some other jurisdictions, such as Ontario and Great Britain, the program for solar PV was technically not suspended during the pricing review. However, the program’s limited capacity was exhausted immediately after the program was launched in 2009 and there’s a waiting list for new capacity. Thus, it’s unclear what effect the new tariffs will have on actual installations. 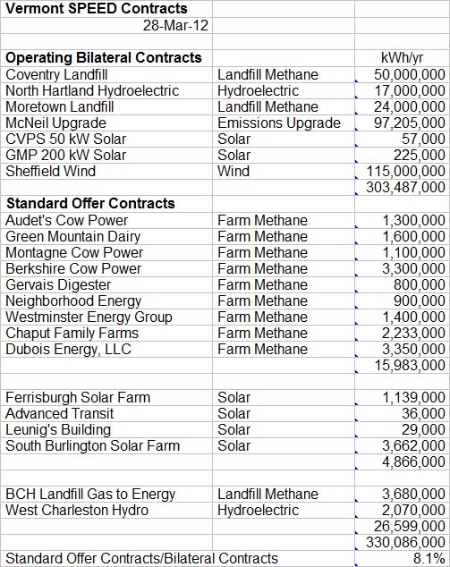 Disclosure: Two of the three solar PV projects developed in Vermont under the standard offer program were built by AllEarth Renewables, the principal of which is David Blittersdorf. This newsletter service is partially sponsored by the David Blittersdorf Family Foundation.

The Vermont program can be summarized as follows.

The performance of Vermont’s program has been limited. By October 2011, only four solar projects, two on-farm biogas plants, one landfill gas plant, and one hydro project have been built since the program was launched. Only 5.3 MW of projects have been completed to date.

Gainesville, Florida installs 4 MW of solar PV per year under it’s feed-in tariff program and has now installed a total of 11 MW or twice that of Vermont.

The population of Gainesville is about one-third that of Vermont.

However, more Vermont projects are expected in early 2012.

The statute enabling standard offer contracts under the SPEED program required the PSB to implement a program that would enable the “rapid development” of renewable energy.

Renewable Energy Vermont (REV), an intervenor in the proceedings, argued that the limited amount of capacity installed in three years violates the will of the legislature.

The SPEED program administrator, a private contractor, and effectively the PSB itself, said that the limited development met legislative intent.

REV also presented evidence that the SPEED program was flawed because no solar project had been built with project financing. The few solar projects that had been installed had all been financed with personal guarantees. That is, the principal owner of the solar plant was personally liable for all debts incurred by the project. Further, said REV, few Vermont residents had sufficient tax liability to take full advantage of the tax credits. Thus, project development was limited to those wealthy enough to personally finance a project and use the tax credits themselves.

REV also disputed the PSB’s modeling of solar project performance and costs, all of which are detailed in the PSB’s final decision.

The PSB final decision is revealing in that there’s an open and public discussion of solar PV’s cost, performance, financing, and tax assumptions, all of which are in the public record. This discussion also includes one of the more detailed evaluations of the cost and performance of small wind turbines in North America.

Unlike the recently announced decision by the Los Angeles Department of Water and Power to launch a 10 MW bidding program to gain “price discovery” for solar PV only, Vermont’s legislature placed its confidence in the competence of the PSB to determine fair prices for each of the technologies and the various size tranches in the Vermont program.

Like similar programs elsewhere in the US, Vermont’s SPEED program is extremely modest. The program’s minimum goal is 5% of Vermont’s retail electricity consumption by 2012 or 287 million kWh per year, and 20% of retail consumption “growth” by 2017.

There is a total of 330 million kWh per year of generation in operation, and there is an additional 300 million kWh from contracted projects in the pipeline.

The PSB estimates that this in-state generation plus out-of-state renewable generation represents 16% of 2010 retails sales. 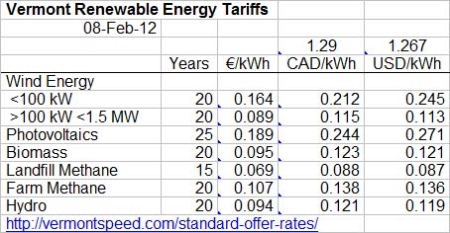