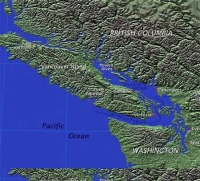 Victoria, British Columbia [RenewableEnergyAccess.com] From solar hot water to micro-hydro power, a startling number of British Columbia’s renewable energy firms are located on Vancouver Island. In fact, there are companies in all the major forms of clean power either based on the island or actively pursuing projects.

Ranging from one-person efforts to large corporations with satellite offices in other regions, many of these firms are leading the way in developing green energy solutions for BC’s electrical grid. Not without their controversy, they are bringing innovation and initiative to the fledgling renewable energy industry in the Canadian province.

“Vancouver Island generates only about 25% of its own power,” said Davis. “The rest is transmitted from the mainland by undersea cables. These reached the end of their rated life this year, and are due for replacement. This is a long and expensive process though, creating an opportunity for sources of on-Island power production to be set up. There is also a wide range of available generation resources in this region, from coal and wood waste to micro-hydro and wind.”

Photovoltaic solar power systems are available through Victoria’s Energy Alternatives. Publicly held Carmanah Technologies, headquartered in the Capital, recently won approval from the US Coast Guard for its solar-powered marine navigation lantern. The solar hot water market on the other hand is being plumbed by several companies, all based in Victoria, and biodiesel is being made available in this city and surrounding areas.

“The Island is simply a great place to live and work,” says Kevin Pegg, president of Energy Alternatives. “The government has not provided any incentives to the industry to come here, and in fact having to use a ferry service is a disincentive. Climate and lifestyle have a lot to do with it.”

In the wave and tidal energy sector, the Vancouver-based company Finavera Renewables is now testing its proto-type wave power device, the AquaBuoy. One of its first commercial deployments will potentially be in the island waters off Ucluelet, and is now in the negotiation process. And a tidal power prototype, built by Vancouver’s Clean Current, was successfully tested last year at Pearson College’s Race Rocks marine lab.

Micro-hydro power is one of Vancouver Island’s most readily available energy options, and there is a big presence in this area as well. One example is Executive House Power Corp, based in Duncan, a successful generator of micro-hydro power for years.

In addition, the assessment and permitting process for micro-hydro developers is often aided by the Barkley Project Group, a team of engineers and environmental specialists based in Nanaimo.

One way for students or professionals interested in learning more about clean power companies active in BC is to attend the upcoming IPPBC annual conference. It takes place from November 4th to 6th in Vancouver, and is on track to being the association’s largest event yet.

The BC Sustainable Energy Association, an NGO with its head office in Victoria, is another avenue. Anyone with an interest in sustainable energy solutions is welcome to join their membership.