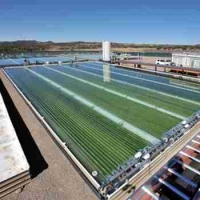 California, United States — Carbon dioxide seems to be the evil nemesis in a world preoccupied with its contributions to climate change. The less CO2 you emit, it seems, the better citizen you are, and with good reason. But at algae-to-biofuel facilities across the nation, carbon dioxide is not only not the enemy, it’s an essential partner to helping achieve a low-carbon future.

CO2 — along with sunlight and water — is needed to grow algae, which can in turn produce oil, otherwise known as “oilgae” or “green crude.” While in its nascent stages, the “oilgae” industry is making strides toward commercial production, all while putting CO2 – designated a pollutant by the Environmental Protection Agency last year – to work as a needed, and yes, valuable, feedstock.

Using CO2 as a catalyst to grow algae is a more viable solution for what to do with the plentiful gas than, for example, sequestering and burying it underground, according to those in the industry. “Putting it underground will not create a market. Finding a way of turning [CO2] into something that can provide value will,” Tim Zenk, vice president of corporate affairs at Sapphire Energy, said.

“The potential is huge because at least in theory, it’s such a win-win. You’re using carbon that would otherwise be put into the atmosphere, and creating products,” Clint Wilder, senior editor with CleanEdge, said. CleanEdge recently issued a report highlighting as a “trend to watch” the role CO2 can play as a feedstock for various industries, including algal biofuels and cement production.

Green crude producer Sapphire, backed by Bill Gates’ Cascade Investment and Venrock, a venture capital firm of the Rockefeller family, successfully produced 91-octane gasoline from algae that fully conforms to ASTM certification standards in 2008, and last year participated in a test flight using algae-based jet fuel in a Boeing 737-800 twin-engine aircraft, according to its website. Sapphire’s algae production occurs in an open-pond system vs. a closed bioreactor. “We went with the open-pond approach because we didn’t see much advantage of closed, which can be very expensive. We needed to be competitive with fossil sources of oil … which is around $75-80 a barrel,” Zenk said.

After the algae is grown, the oil is extracted and refined in a typical refinery set-up. Even though burning the oilgae releases CO2 back into the atmosphere, “on a lifecycle basis, if CO2 is consumed during the algae process, our fuels are extremely low-carbon,” Zenk said. Compared to diesel, the amount of carbon is reduced by 68 percent over the lifecycle. He estimates that between 12 and 15 kilograms of CO2 are consumed per gallon of oil produced.

“A great rule of thumb is 1 kilogram of algae requires 2 kilograms of CO2,” Joanna Money, vice president of business development at Solix Biofuels, said. Solix has two facilities that produce algae, a research and development facility at Fort Collins, CO (which uses CO2 from nearby New Belgium Brewery), and a demonstration plant in southern Colorado. Solix’s closed bioreactor system provides five times the surface level exposure to sunlight compared with open-pond systems and seven times the biomass productivity, according to the company’s website.

Solix’s test environments currently yield peak rates in excess of 2,000 gallons per acre, per year, according to its website. In five years, “we will be working with partners to deploy commercial production modules to grow, harvest and extract algae,” Money said.

According to experts, microalgae can produce between 5,000 and 15,000 gallons of oil per acre per year. That hasn’t yet been done on a large scale. Sapphire recently received a $104-million grant from the Department of Energy to build a $135-million commercial demonstration facility in Columbus, NM. Construction on the Integrated Algal Bio-Refinery will begin this year. The 300-acre fully integrated cultivation-harvest-extraction facility will produce at least 1 million gallons per year of finished fuel when completed sometime in 2012, Zenk said. The company is committed to using anthropogenic sources of CO2.

While algal biofuels may not replace petroleum anytime soon, their production certainly represents a creative and viable solution for using up unwanted CO2, even to the point of creating a new commodity market for it. “The key is to actually have a price on CO2 emissions. Once carbon is actually priced, in terms of having to pay for emissions, you will see a market emerging,” Wilder said.

The Chicago Climate Exchange offers voluntary-but-binding contracts for trading carbon dioxide via a cap and trade system. CCX President Richard Sandor has publicly stated that carbon can become the largest commodity in the world.

But whether or not CO2 becomes a real commodity depends on legislation, Solix’s Money said. “Absent a price or market for carbon, or at least a carbon regime,” CO2 will not become a commodity, agreed Zenk. “There has to be a business out of the collection, distribution, and adding value to the carbon molecule.”

Algal biofuels isn’t the only industry finding ways to add value to the carbon molecule. Another industry with vast potential for using CO2 is cement production. One example is Los Gatos, CA-based Calera, backed by funding from Khosla Ventures. Calera’s  Mineralization via Aqueous Precipitation process consumes CO2 from a nearby Dynegy-owned natural gas powerplant to produce calcium and magnesium carbonate and bicarbonate, the basic building blocks for cement. The process converts 1 ton of CO2 into 2 tons of building material. The result, according to Calera, is that it not only consumes CO2, but also avoids the release of carbon from traditional cement production.

The prospect of using CO2 to manufacture cement “is very exciting,” Wilder said. “It’s one of the most carbon-intensive products to make. The sheer volume of cement used around the world is mind-boggling.”

With carbon-capture industries like these gaining ground, it’s not hard to envision a future where CO2 is treated less as the enemy and more as an integral ingredient in the global economy. While a zero-carbon future is “hard to imagine,” Zenk said, “I think you’ll find [a] low-carbon [future.] We can win the war on climate if we think about it in those terms, at least in my lifetime.”

Janneke Pieters is a freelance writer on energy, electricity and other issues. She is the former associate editor of Electric Perspectives magazine, published by Edison Electric Institute.