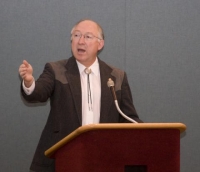 Cambridge, Mass. — The United States is in a good place in terms of energy, explained former Secretary of the Interior Ken Salazar during a keynote session at the MIT Energy Conference in Cambridge, Mass. Oil imports are the lowest since 1991 at 40 percent, carbon emissions are slowly dwindling, Salazar said, and the U.S. is making these positive improvements due to four cornerstones of progress.

“First, the All of the Above Energy Strategy is working,” he said, ”we’ve embraced energy independence.” He cited several statistics to solidify his point: since 2008, the U.S. has quadrupled its amount of solar, developed an enormous amount of wind capacity, and is moving forward with a wide array of biofuels technologies.

The second cornerstone is the passage of important energy policy in 2005 and 2007, “days when things seemed to be able to get done,” lamented Salazar, which allowed for a legal framework that still reigns.  Today, the Obama administration has encouraged important research and development opportunities, which correlates with the third cornerstone: technological breakthroughs. Organizations such as MIT, Sandia National Laboratory, and many others have “brought us marvelous technological breakthroughs that were unimaginable 10 years ago,” said Salazar.

The final cornerstone is investments in the diversification of the energy portfolio. The U.S. is slowly learning how to use energy wisely. A prime example is the growing transition from gas-guzzlers to energy efficient vehicles, spurred by President Obama’s changes to Corporate Average Fuel Economy (CAFE) standards. Said Salazar, “we’ve moved from driving Hummers to shooting for a 55 mile-per-gallon standard.”

Though we’ve made huge strides in such a short period of time, Salazar reminded the audience that we still have plenty of challenges ahead of us, such as land use impacts. In order to avoid this, Salazar highlighted the Smart from the Start program. The government worked with the National Renewable Energy Laboratory to highlight solar hotspots in the southwestern U.S. Once they mapped these areas, they identified ecological areas where solar projects are not ideal. From there, they worked with industry leaders and the environmental community to craft a viable southwestern plan for the development of clean energy.

But beyond land use issues, Salazar highlighted climate change as the real danger — and it is no longer a debate. “It is important to recognize that we are navigating through a time where climate change is no longer being debated among scientists,” he explained. “It may still be debated among some politicians, but scientists, like those here at MIT, will say it is true and CO2 is a major factor.”

He expressed the need to figure out a viable climate policy framework not only in the U.S., but internationally. “How do you reign in developing countries like Brazil that need to be a part of equation even though they don’t consume or contribute as much to emission as the U.S?” he asked. “It is very much a challenge that hopefully you here at MIT will help us solve.”

When asked how to change the public attitude about energy and climate change, Salazar said it all comes down to economics. We need to get the technology to a point where people realize that they can keep money in their pockets.

“When people complain about natural gas or solar energy,” he said, “I remind them that they, too, are a significant user of energy and they need to get on the bandwagon to be part of the energy solution.”