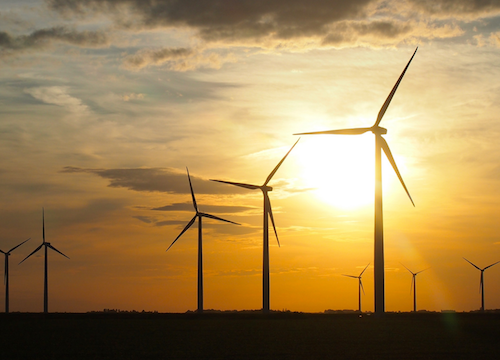 According to AWEA’s report, the U.S. wind industry installed 6,748 MW of new wind power capacity in 4Q16, the second strongest quarter for installations on record.

Kiernan said that about 18,000 MW of wind capacity is in the development pipeline, representing about $60 billion in investments over the next six years.

Also speaking during the broadcast, Rob Threlkeld, global manager-renewable energy for GM, said that half of the power used at the company’s Arlington facility comes from wind energy. He added that all of the facility’s power will come from wind in 2018 as the result of a power purchase agreement it signed last year with Renewable Energy Systems for energy from the planned 150-MW Cactus Flats wind farm in Concho County, Texas.

Threlkeld added that GM last year made a commitment to power all of its operations with renewable energy by 2050.

“To put that into context, it’s 350 facilities, across 59 countries,” he said. “To give you another perspective on just how large that is, we use just over 9 TWh of electricity to build our vehicles and power our offices, technical centers and warehouses around the world.”

Kiernan said that wind farms now are installed in 41 states.

The Amazon Wind Farm U.S. East, powered by Avangrid Renewables, began commercial operations this month, according to a Feb. 9 statement from Avangrid Renewables. Located in Perquimans and Pasquotank counties in northeastern North Carolina, the project has 104 2-MW wind turbines. Expansion of the project is possible, but no concrete plans are in place at this time, a spokesperson for Avangrid told Renewable Energy World.

As the result of a contract with Amazon Web Services Inc. (AWS), an Amazon.com company, the energy generated by the project will be delivered into the electrical grid that supplies both current and future AWS Cloud data centers.

Avangrid Renewables, which will own and operate the project, is a unit of AVANDRID, formed in 2015 by the merger of Iberdrola USA and UIL Holdings Corp. Iberdrola S.A. owns about 81 percent of AVANGRID.