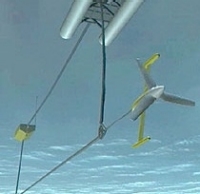 Florida, United States [RenewableEnergyWorld.com] The same energy that drives ocean waves and currents may be a rich source of electrical power. Researchers in Florida say even gentle flows of two or three knots are enough to drive a propeller attached to an underwater turbine. Advocates say ocean power could be cheap and help replace oil or coal-based systems that are blamed for global warming.

Douglas Bedgood is president of Keys Hydro Power and says he wants to build a turbine farm in the Florida Keys, “We could upscale this to 10 feet [three meters] across and it would be perfect.”

The goal is to harness the energy produced by the rise and fall of waters during the tidal cycle. His group is working on a test turbine that it plans to submerge in a site about nine meters under water between two islands.

“By the end of 2008 or early 2009, we will have several [turbines] just to see how we can manage them as a group. Then another year after, it will be several hundred,” Bedgood said.

The first step, however, is to show authorities that the groundbreaking project will not damage wildlife or coastal resources in the popular tourist area. Bedgood says marine life should be unharmed. “For manatees and turtles, our turbines will be mounted up off the [ocean] floor, so they can maneuver through them. And the leading edges of any moving part will have foam rubber cushions on them,” he explains.

Renewable energy projects like this one aim to reduce existing strains on the earth’s resources, but they do raise concern about causing new problems. Kenny Broad is a professor at the Rosenstiel School for Marine and Atmospheric Science near Miami. He says new initiatives should proceed with caution.

“So it is a significant velocity with the equivalent energy of some of the world’s richest energy sites,” says Rick Driscoll, who is head of the university’s Center for Ocean Energy Technology. He says one of the biggest challenges is developing equipment that can withstand the intense forces of the current. “It is a lot more challenging to put something in the ocean, and certainly any energy system to go in there has to work and be competitive with existing land-based technologies,” notes Driscoll. 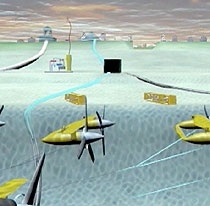 He says more investment is needed for new technologies. “There is a lot of significant potential, but there is a limited supply of money out there right now,” he adds.

Driscoll says federal and state funding could help U.S. researchers perfect the new technologies and bring the benefits to other countries around the world.