More
Home Baseload US Re-takes Lead in Clean Energy Race from China — But Not...

According to the just-released report “Who’s Winning the Clean Energy Race?” from the Pew Charitable Trusts, the United States invested the most in clean energy of any country in 2011, retaking the lead from China, which had held the top sport for the last two years. But the U.S. resurgence is more likely to be a blip than a trend. 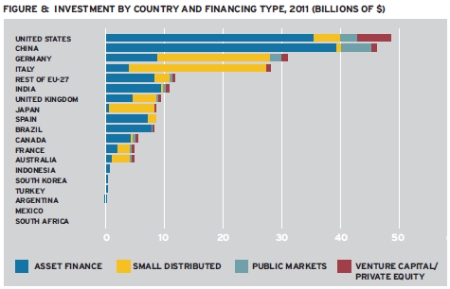 The United States’ investments in clean energy were up 42 percent in 2011 over 2010, reaching $48.1 Billion.  Meanwhile, China investments were basically flat at $45.5 billion.

The U.S. maintains a firm lead in venture capital invested in clean energy, accounting for 70 percent of the total $8.6 billion invested, but while that is vital for clean energy technology to progress, it is not very significant in terms of total investments, or profits from those investments.

Venture capital investments typically fund technology development, while pubic market investments, asset finance, and debt finance fund manufacturing scale-up and infrastructure investment.  Later stages of investment are typically much larger, because they need to be large enough to fund the returns to early stage investors and still reap returns for themselves.  Similarly, while the returns to early stage investors can be spectacular in terms of percentage, what matters to a country’s economy is the absolute size of returns, which require large investments, typically in clean energy Infrastructure, such as wind and solar farms. 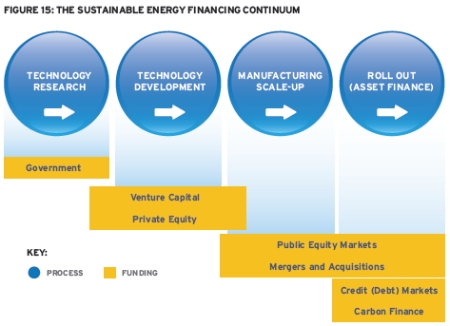 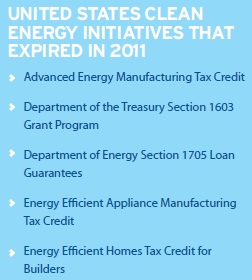 While the U.S. still dominates technology development and venture investment, our inconsistent and fading support for clean energy has allowed China to take the lead for the last two years.

Ironically, fading support for Clean Energy is also what allowed the U.S. to re-take the lead in 2011.  Many developers rushed to get projects started before the end of 2011, when a number of clean energy incentives expired (see sidebar.)

Because so many initiatives expired and may not be renewed, 2011 seems likely to be America’s last hurrah in the the clean energy race.  Unless we re-initiate significant support for clean energy soon, clean energy investment and the industries and jobs it creates are likely to head for more hospitable political environments.

China’s pause in clean energy investment growth was a re-consolidation, not a sign of a peak.  While the U.S. was cutting incentives in 2011, China was adopting new ones.  Not only did China increase a national target for solar deployment to 50 GW in 2010, but they adopted their first national feed-in tariff.

It looks like America is winning the Clean Energy race, but 2011 was just our year to be the hare to China’s tortoise.  Next year, look for the U.S. to take a nap along the side of the clean energy racecourse, while China resumes its purposeful ramp-up of clean energy investment.