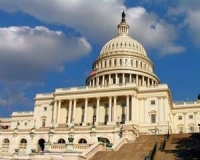 In Washington, President Obama today announced that the U.S. Departments of Agriculture, Energy and Navy will invest up to $510 million during the next three years in partnership with the private sector to produce advanced drop-in aviation and marine biofuels to power military and commercial transportation.

The initiative responds to a directive from President Obama issued in March as part of his Blueprint for a Secure Energy Future, the framework for reducing dependence on foreign oil.

The US government funds will be re-directed from already authorized funding, and no additional US spending will be required. The government plans to issue an RFP shortly to bring private industry into the effort.

“To create and stabilize an industry”

“Our goal is to create and stabilize the advanced biofuels industry,” commented Agriculture Secretary Vilsack. “This is not a fly by night effort – it’s a commitment to real energy future. The president has asked us to make the U.S. more competitive, and to give us real diversification in our energy choices.”

“The Defense Production Act has been on the books since the 1950s,” Navy Secretary Mabus added. “If industries are not existent, government can help industries get off the ground. I can think of no more important strategic issue than energy security.”

“We simply buy too much fuel from out of the country,” Mabus added. “The supply shocks, the price shocks, its simply unacceptable to the military. For every dollar increase in the cost of a barrel of oil, it costs the Navy $30 million.”

Partnering with the private sector

The biofuels initiative is being steered by the White House Biofuels Interagency Work Group and Rural Council, both of which are enabling greater cross-agency collaboration to strengthen rural America. Shortly, the group will issue an RFP to seek out private partners to leverage the government investment.

“Biofuels are an important part of reducing America’s dependence on foreign oil and creating jobs here at home,” said President Obama. “But supporting biofuels cannot be the role of government alone. That’s why we’re partnering with the private sector to speed development of next-generation biofuels that will help us continue to take steps towards energy independence and strengthen communities across our country.”

“This is the first time we have addressed feedstock, technology and market risk at one time,” said USDA Secretary Vilsack. “Previous efforts aimed at one or the other slowed down the process. This is a unique and historic response to the energy challenge.”

“America’s long-term national security depends upon a commercially viable domestic biofuels market that will benefit taxpayers while simultaneously giving Sailors and Marines tactical and strategic advantages,” said Navy Secretary Ray Mabus. “Today’s announcement not only leverages our home-grown fuel sources to support our national security, but it also helps advance the biofuels market, which ultimately brings down the cost of biofuels for everyone.”

“By building a national biofuels industry, we are creating construction jobs, refinery jobs and economic opportunity in rural communities throughout the country,” said Vilsack.  “As importantly, every gallon of biofuel consumed near where it is produced cuts transportation costs and, for the military, improves energy security.”

“These pioneer plants will demonstrate advanced technologies to produce infrastructure-compatible, drop-in renewable fuels from America’s abundant biomass resources,” said Energy Secretary Chu. “It will support development of a new, rural-focused industry that will replace imported crude oil with secure, renewable fuels made here in the U.S.”

The partnership aims to reduce U.S. reliance on foreign oil and create jobs while positioning American companies and farmers to be global leaders in advanced biofuels production.  The United States spends more than $300 billion on imported crude oil per year.  Producing a domestic source of energy provides a more secure alternative to imported oil and improves our energy and national security.

In June, President Obama signed an Executive Order establishing the first White House Rural Council to build on the Administration’s robust economic strategy for rural America and make sure that continued federal investments create maximum benefit for rural Americans. Administration officials have been working to coordinate programs across the government and encourage public-private partnerships to improve economic conditions and create jobs in rural communities.

This article was originally published by Biofuels Digest and was reprinted with permission.