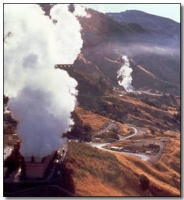 The report identifies up to 6,442.9 MW of new geothermal power plant capacity under development in the United States in those states as well as Oregon, Colorado, Florida, Louisiana and Mississippi. This pushes the prospects of nearly 10 GW of installed capacity in the coming years over a broad section of the nation. At that level, geothermal power will satisfy the needs of over 10 million people in 14 states and still have tremendous growth potential.

“The Geothermal Energy Industry is experiencing unprecedented growth with future years’s promising double-digit, year-over-year expansion,” said Karl Gawell, GEA’s executive director. “While stimulus money has been driving much of our recent growth, we are also seeing that as geothermal technology pushes forward the economics of these projects really make sense.”

A major source of the geothermal industry’s 46 percent growth in confirmed new power projects over the past year and 33 percent increase in employment was the American Recovery and Reinvestment Act (ARRA) of 2009, which expanded tax credits for new projects to include a 30% investment credit and a “cash grant” alternative.

ARRA also “laid the foundation for sustained future growth” according to Gawell by providing up to $400 million in new funding to implement a wide range of research, development, demonstration and deployment activities. The amount of Federal funding provided to the geothermal industry through ARRA is unprecedented and is spurring the continued development of domestic geothermal resources.

Nevada leads the way in ARRA projects with the Department of Energy funding totaling over $70 million. The funding is being used to study many emerging geothermal technologies including Enhanced Geothermal Systems (EGS) and Geothermal Hydrocarbon Co-production (GHCP)