More
Home Baseload Geothermal US Geothermal Development Up 20% in 2008 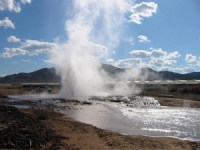 Washington, D.C., United States [RenewableEnergyWorld.com] The Geothermal Energy Association (GEA) has released its U.S. Geothermal Production and Development Update for August 2008. This report shows continued growth in the number of new geothermal power projects under development in the United States, a 20% increase since January of this year.

“The surge in new geothermal power development continues,” said Karl Gawell, GEA’s executive director. In January of 2008, GEA released a survey which identified 86 new projects with a potential of 3,368 MW. The new report identified 103 projects, which when completed could have up to 3,979 MW of power capacity. Also, two projects listed as under development in the January survey have since come on-line.”

Current geothermal capacity on-line in the U.S. is 2,957 MW according to the report, and with the new additions, geothermal power could reach nearly 7,000 MW. Given the high reliability and capacity factors for geothermal power, this would meet the household electricity needs of the cities of Los Angeles, Phoenix, San Francisco, and Seattle combined.

The August 2008 results by state are: (State: Number of Geothermal Projects/MW)