Richland, Wash. — A new analysis shows that the nation’s land and water resources could likely support the growth of enough algae to produce up to 25 billion gallons of algae-based fuel a year in the United States, one-twelfth of the country’s yearly needs.

The findings come from an in-depth look at the water resources that would be needed to grow significant amounts of algae in large, specially built shallow ponds. The results were published in the May 7 issue of Environmental Science and Technology, published by the American Chemical Society.

“While there are many details still to be worked out, we don’t see water issues as a deal breaker for the development of an algae biofuels industry in many areas of the country,” said first author Erik Venteris of the Department of Energy’s Pacific Northwest National Laboratory.

For the best places to produce algae for fuel, think hot, humid and wet. Especially promising are the Gulf Coast and the Southeastern seaboard. 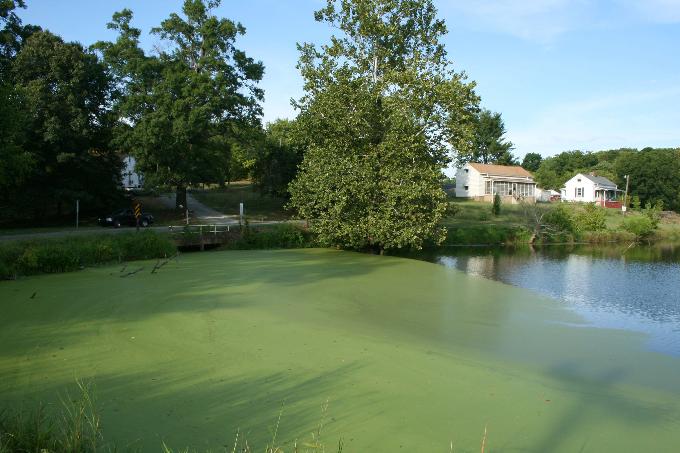 An algae bloom in North Carolina, a region of the country equipped for broad-scale algae growth. Photo courtesy of Ildar Sagdejev.

“The Gulf Coast offers a good combination of warm temperatures, low evaporation, access to an abundance of water, and plenty of fuel-processing facilities,” said hydrologist Mark Wigmosta, the leader of the team that did the analysis.

Algae, it turns out, are plump with oil, and several research teams and companies are pursuing ways to improve the creation of biofuels based on algae — growing algae composed of more oil, creating algae that live longer and thrive in cooler temperatures, or devising new ways to separate out the useful oil from the rest of the algae.

But first, simply, the algae must grow. The chief requirements are sunlight and water. Antagonists include clouds, a shortage of water, and evaporation.

A previous report by the same team looked mainly at how much demand algae farms would create for freshwater. That report demonstrated that oil based on algae have the potential to replace a significant portion of the nation’s oil imports and drew the attention of President Obama.

The new report focuses on actual water supplies and looks at a range of possible sources of water, including fresh groundwater, salty or saline groundwater, and seawater. The team estimates that up to 25 billion gallons of algal oil could be produced annually, an increase of 4 billion gallons over the previous study’s estimate. The new amount is enough to fill the nation’s current oil needs for one month — about 600 million barrels — each year. The study’s authors note that the new estimate is exactly that — an estimate — based to some degree on assumptions about land and water availability and use.

An algae farm would likely consist of many ponds, with water maybe six to 15 inches deep. A few companies have built smaller algae farms and are just beginning to churn out huge amounts of algae to convert to fuel; earlier this year, one company sold algae-based oil to customers in California. Players in the algae biofuels arena range from Exxon-Mobil, which launched a $600 million research effort four years ago, to this year’s teenage winner of the Intel Science Talent Search, who was recognized for her work developing algae that produce more oil than they normally do.

The availability of water has been one of the biggest concerns regarding the adoption of broad-scale production of algal biofuel. Scientists estimate that fuel created with algae would use much more water than industrial processes used to harness energy from oil, wind, sunlight, or most other forms of raw energy. To produce 25 billion gallons of algae oil, the team estimates that the process annually would require the equivalent of about one-quarter of the amount of water that is now used each year in the entire United States for agriculture. While that is a huge amount, the team notes that the water would come from a multitude of sources: fresh groundwater, salty groundwater, and seawater.

For its analysis, the team limited the amount of freshwater that could be drawn in any one area, assuming that no more than 5 percent of a given watershed’s mean annual water flow could be used in algae production. That number is a starting point, says Venteris, who notes that it’s the same percentage that the U.S. Environmental Protection Agency allows power plants to use for cooling.

“In arid areas such as the Desert Southwest, 5 percent is probably an overstatement of the amount of water available, but in many other areas that are a lot wetter, such as much of the East, it’s likely that much more water would be available,” says Venteris.

Venteris and colleagues weighed the pluses and minuses of the various water sources. They note that freshwater is cheap but in very limited supply in many areas. Saline groundwater is attractive because it’s widely available but usually at a much deeper depth, requiring more equipment and technology to pump it to the surface and make it suitable for algae production. Seawater is plentiful, but would require much more infrastructure, most notably the creation of pipelines to move the water from the coast to processing plants.

The team notes that special circumstances, such as particularly tight water restrictions in some areas or severe drought or above-average rainfall in others, could affect its estimates of water availability.

The work was funded by the DOE’s Office of Energy Efficiency and Renewable Energy. In addition to Venteris and Wigmosta, PNNL scientists Richard Skaggs and Andre Coleman contributed to the project and authored the study.