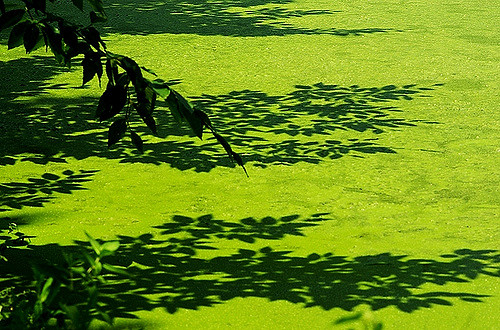 In Washington, as the U.S. Department of Energy (DOE) Bioenergy 2016 conference opened its third day, the DOE announced up to $15 million for three projects aimed at reducing the production costs of algae-based biofuels and bioproducts through improvements in algal biomass yields.

It’s one of those moments in the algae narrative that remind you of that scene in Rocky IV where Dolph Lundgren tells Rocky Balboa, “I must break you.” The time is now, now, or now. Take your pick.

DOE has picked a tough challenge. Of course, fracking looked nigh impossible, except to our DOEers, that Avengerian can-do crew.

These projects will develop highly productive algal cultivation systems and couple those systems with effective, energy-efficient, and low-cost harvest and processing technologies. This funding will advance the research and development of advanced biofuel technologies to speed the commercialization of renewable, domestically produced, and affordable fossil-fuel replacements.

The three projects selected, located in California and Florida, will include multi-disciplinary partners to coordinate improvements from algal strain advancements through pre-processing technologies (harvesting, dewatering, and downstream processing) to biofuel intermediate in order to reduce the production costs of algal biofuels and bioproducts.

And the Winners Are…

Algenol Biotech LLC (Ft. Myers, Florida)—Algenol Biotech LLC, the National Renewable Energy Laboratory, Georgia Institute of Technology, and Reliance Industries Limited, have formed a team to advance the state-of-the-art in algal production and biofuel processing with the end goal of a sustainable, economically viable biofuel intermediate through enhanced productivity of cyanobacteria, the conversion of the biomass to a biofuel intermediate, and the cost-sensitive operation of a photo-bioreactor system.

Readers may recognize that MicroBio Engineering is led by algae’s Dr. No himself, John Benemann — who kidded once (regarding fuels applications of algae) that “if algae is the answer, we’re in big trouble.” Good to see that Dr. kNOw (as he prefers to be styled), is back in the fight. We’ll assume that this group, which includes Heliae that retreated from algae jet fuels some time ago, is focused on bioproducts. Possibly astaxanthin.

Good also to see Algenol come just a bit out of stealth, after retreating last year to a much more low visibility and low-wattage profile than its charismatic founder, Paul Woods, would typically generate for the company. Reliance is a long-standing partner — but we haven’t seen publicly too much of Georgia Tech in the Algenol Cinematic Universe, so that’s one to note.

Another big note — the company’s been re-named. No longer Algenol Biofuels, it’s Algenol Biotech. Ominous sign for an award from the Department of, er, Energy.

The Global Algae Innovations consortia is a big one — six institutions and companies in all. GAI was in a prominent spot at last year’s Algae Biomass Summit, noting that carbon utilization was now a real business opportunity, and costly carbon sequestration options would not be competitive as the algae technology platform goes to commercial-scale. The company, headed by David Hazelbeck, picked up $1 million from DOE last July in a project aimed at increasing “algal biomass yield by deploying an innovative system to absorb carbon dioxide from the flue gas of a nearby power plant.”

GAI itself? Dave Hazlebeck was once General Atomics’ algae biofuels chief. We always wondered if GAI was named to save on printing charges — same three-letter acronym.