Canadian lawmakers launch aggressive plans to tap the nation’s vast potential for hydropower production. Ambitions for a better economy and a need for more clean energy in the U.S. are driving Canada’s efforts to monetize its hydro resources.

Canada is already the world’s second-largest hydropower producer behind China.

But Canada is bent on producing more, driven by its vast potential for hydropower generation and demands for more clean energy in the U.S.

It’s a major element of Canada’s plan to boost its economy, as lawmakers attempt to wean the country off coal-fired power through landmark legislation that encourages the development of renewable energy, especially hydropower.

“The federal government is intending to introduce legislation to reduce emissions pretty significantly from coal-fired plants,” said Colin Clark, chairman of the Canadian Hydropower Association. “I think that creates an opportunity for hydropower.”

In the U.S., where restrictions on carbon emissions are anticipated and demand is growing, there’s a big market for Canada’s hydropower resources. A handful of deals to export that power to the U.S. have already been made and more are looming. 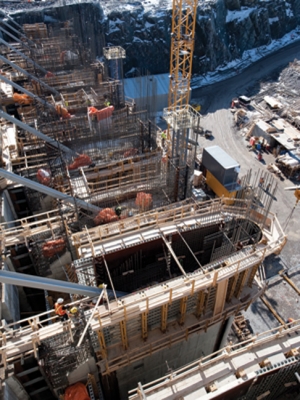 “The U.S. is constrained in how it can develop its own generation systems because of uncertainty around carbon,” said Dan McCarthy, president and chief executive officer of Black & Veatch Water. “Canadian hydro companies have an opportunity to take advantage of that uncertainty and get some power purchase agreements in place.”

Canada, home to about 475 hydroelectric plants with a capacity of 70,000 MW, produces about 355 terawatt-hours of hydropower each year. But Canada’s untapped potential is far greater.

According to a study commissioned by the Canadian Hydropower Association, Canada has 163,000 MW of untapped hydropower potential, more than twice the country’s existing hydropower capacity.

Already, hydropower accounts for 60 percent of Canada’s electricity consumption. That number is sure to rise as construction of several new hydropower plants near completion while more coal-fired plants are shuttered in the name of clean air.

There has been “a very significant increase in the number of references to hydropower by the federal government,” Clark said. “It shows that the politicians are strongly supportive of the hydropower development in Canada and policies that will encourage development.

“The proof is in the actual progress and execution of projects,” he said. “That is happening now. It’s more than just proposals and talk.”

The following provides details about some of the project activity in Canada and key legislative actions designed to encourage hydropower development across the nation.

The Wuskwatim Project, a 200-MW run-of-river generating station under construction on the Burntwood River in northern Manitoba, will begin generating power late in 2011, officials at Manitoba Hydro said.

Construction of the C$1.3 billion project began in August 2006 and includes an earthen dam, a three-unit powerhouse, spillway, transmission lines, and a 30-mile access road.

The general contractor in charge of general civil construction is the O’Connell-Neilson-EBC Partnership, which was awarded a $289 million contract in 2008.

Each generating unit has a vertical-shaft, fixed-blade propeller turbine. General Electric Hydro was awarded a C$46.2 million contract for the design, manufacture and supply of the three turbines and generators.

“Wuskwatim is a unique project which is serving as a model for future project development, in Manitoba and in other parts of the country,” said Bob Brennan, president and chief executive officer of Manitoba Hydro.

The spillway will have three bays, each 9 meters wide and 16 meters high, and will be capable of passing a peak discharge of about 2,650 cubic meters per second.

The project is being developed by the Wuskwatim Power Limited Partnership, a joint venture between Manitoba Hydro and the Nisichawayasihk Cree Nation. The Wuskwatim project is the first time Manioba Hydro has entered into an equity partnership with a First Nations Community on a power project.

The project stems from nearly a decade of planning, studies and negotiations between Manitoba Hydro and the Nisichawayasihk Cree Nation.

The low-head design of the dam will create less than one half of a square kilometer of flooding, the least amount of flooding of any hydro project in northern Manitoba.

BC Hydro is adding two 500-MW generators to the powerhouse at Mica Dam at a cost of about C$1 billion.

Regulators approved the environmental assessment for the expansion in April after a two-and-a-half-year review. Preliminary construction began in October.

The additional units will boost the plant’s capacity 55 percent to 2,085 MW.

The four existing units can generate up to 1,085 MW. The plant was originally designed to hold six units.

Installation of Units 5 and 6 was deferred until the additional capacity was needed, said Morgan McLennan, plant manager.

Unit 5 is expected to be up and running by 2014 and Unit 6 by 2015. Improvements are now being made to the bottom of the lead shaft in the transformer chamber for Units 5 and 6. Also, construction of a 500 KV, gas insulated switchgear is underway and is expected to take about two years.

The Mica project, one of the largest earthfill dams in the world, began generating power in 1977.

After budgeting C$25 billion to add 4,500 MW of generation capacity through the construction of more hydropower projects and transmission lines by 2015, Quebec has decided to spend another C$32 billion by 2035 to boost power production and sales to the U.S.

At the center of Quebec’s plan to boost export capacity to the U.S. is a 1,550-MW hydropower complex under construction on the Romaine River.

The C$6.5 billion La Romaine project along Quebec’s Lower North Shore is expected to be up and running by 2020.

The project calls for the construction of four generating stations capable of producing 8 terawatt-hours a year. Most of the power will be exported to the U.S. Profits from those export sales could reach C$2 billion in the first 12 years, the province estimates.

In August, Hydro-Quebec signed an agreement with two Vermont utilities, Green Mountain Power Corp. and Central Vermont Public Service Corp., to sell up to 225 MW of power each year for 26 years beginning in 2012.

“Our strong relationship with our friends in Quebec is vital to the economic well-being of Vermont,” Vermont Gov. Jim Douglas said. “This agreement will help ensure a clean, competitively-priced energy future for Vermonters.”

Enacted in September 2009, Ontario’s Green Energy Act has led to a surge of new interest in building renewable energy projects throughout the province.

The act includes a feed-in-tariff (FIT) program, which provides price supports for renewable-energy producers serving Ontario. The FIT program is a major part of the province’s aggressive plan to eliminate coal-fired power.

Under the FIT program, the Ontario Power (OPA) Authority has offered contracts to 184 projects with a capacity exceeding 500 kW each.

Altogether, those projects are expected to add nearly 2,500 MW of new capacity. Of the 184 projects, 46 are hydropower projects.

“This transition to cleaner power is well underway,” said Colin Anderson, chief executive officer of OPA. “In 2009, more than 80 percent of the province’s electricity came from non-emitting sources of power such as nuclear, water, wind, solar and biomass. Coal-fired generation will be eliminated in Ontario by the end of 2014.”

The FIT program guarantees a stable price for the producers of renewable energy. Under the program, hydropower producers are paid 13.1 cents per kilowatt-hour for up to 10 MW. The rate is 12.2 cents for 10 to 50 MW. In addition, the length of the contract is 40 years, well above the 20-year contract for wind and solar.

“Ontario has flicked the switch on a new era of green energy prosperity,” said Rick Smith, executive director of Environmental Defence, a member of the Green Energy Act Alliance.

In addition to the Green Energy Act, the Ontario Legislature recently approved a bill that aims to protect 225,000 kilometers in northern Ontario while opening the rest up to development.

The bill provides First Nations the ability to approve land-use plans prior to development in the north, where the potential for new hydropower capacity is abundant.

“Ontario’s far north holds significant waterpower potential and there are a number of communities actively pursuing development opportunities,” said Paul Norris, president of the Ontario Waterpower Association. “Our industry remains committed to working with First Nations to help ensure far north communities have the ability to realize the considerable social, economic and environmental benefits from the sustainable development of waterpower resources.”

Earlier this year, British Columbia approved an aggressive plan known as the Clean Energy Act to create jobs and reduce carbon emissions through the development and export of new hydropower capacity.

Among other things, the measure establishes a goal of energy self-sufficiency by 2016, requires the province to generate a whopping 93 percent of its power from renewable resources such as hydro, and raises the standard for meeting incremental power demand through conservation and efficiency improvements from 50 percent to 66 percent by 2020.

In addition, the bill authorizes significant public investments in expansions at BC Hydro’s Mica and Revelstoke projects.

Another chief objective of the act is to make BC Hydro a net exporter of electricity. Under the measure, BC Hydro will be able to secure long-term export power sales contracts with other jurisdictions, something that was prohibited before the law was passed.

The 196-MW project began selling power to BC Hydro in August. The project includes a 73-MW run-of river facility on Montrose Creek and a 123-MW facility on the East Toba River. A 93-mile transmission line that connects both facilities to BC Hydro’s grid was part of the project. The power is being sold to BC Hydro under a 35-year agreement.

“Unlike traditional hydro, we haven’t built a dam and flooded the valley,” said Donald McInnes, chief executive officer of Plutonic Power. “We’re diverting some water flow into a pipe at a high elevation. It goes down in elevation, spins a turbine, and then we put the water back.”

The 123-MW plant on the East Toba River is the largest run-of-river facility in British Columbia.

The Toba-Montrose project, north of Vancouver, is expected to provide 726,000 megawatt-hours of clean power per year to BC Hydro customers.

The Toba-Montrose project is part of British Columbia’s plan to generate 93 percent of its power from clean domestic resources by 2016.

But Plutonic’s plans for the Toba Valley don’t end there.

The Vancouver-based developer of independent power and its partner, GE Energy Financial Services, plan to build two more run-of-river facilities in the Upper Toba Valley, which would add another 120 MW of generating capacity under a 40-year electricity purchase agreement with BC Hydro.

Transmission lines and other necessary infrastructure are already in place for the Upper Toba Valley Project, which has received its environmental assessment certificate from the province.

Fortis Inc., in partnership with Columbia Power Corp. and Columbia Basin Trust, says it will construct a 335-MW hydropower project at an estimated cost of C$900 million near Waneta Dam on British Columbia’s Pend d’Oreille River.

Construction of the second powerhouse is subject to negotiation and completion of definitive agreements, Fortis said.

The project also calls for the construction of a 6.2-mile transmission line, which will run parallel to a high voltage line from Waneta to a nearby substation.

Fortis will own 51 percent of the Waneta Expansion and will operate and maintain the non-regulated facility when it comes into service, which is expected in spring 2015.

Federal and provincial environmental assessment approvals are in place for the project.

“Fortis is excited about this opportunity to grow our non-regulated hydroelectric generation business in British Columbia, where we have well-established regulated utility operations at FortisBC and Terasen Gas,” said Stan Marshall, president and chief executive officer of Fortis.

The Waneta Expansion will become part of the Canal Plant Agreement and will receive fixed energy and capacity entitlements based upon long-term average water flows, thereby significantly reducing hydrologic risk associated with the project.

The power will be sold to BC Hydro under a long-term power purchase agreement at prices comparable to those for projects recently accepted by BC Hydro under its 2008 Clean Power Call.