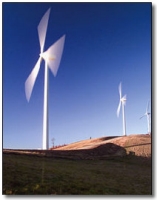 Under a new a 10-year agreement, the University of Pennsylvania will now purchase 10 percent of its energy needs from wind power, in effect doubling its wind-energy purchase to the output from 10 wind turbines.

Philadelphia, Pennsylvania – April 22, 2003 [SolarAccess.com] The university will purchase 40 million kWh annually from Community Energy, Inc. of Wayne, Pennsylvania in an agreement that represents the largest retail purchase of wind power in the United States. The 10-year commitment will also lead to the construction of a new wind farm in Pennsylvania. “We at Penn are pleased to be a national leader in the choice for clean energy and the development of the wind-generated power industry in Pennsylvania,” Penn President Judith Rodin said. “Through this example of environmental stewardship, we can continue to raise the awareness of our students and the community about alternative fuel options.” Penn became a national leader in the use of Renewable Energy through its original 2001 agreement to purchase 20 million kWh of wind power per year for three years from a wind farm in western Pennsylvania. Although wind power is currently more expensive than that produced by traditional power plants, Penn funded the difference through savings from its aggressive energy-conservation program that reduced peak demand by 18 percent. Penn’s new 10-year commitment will make it possible for Community Energy and other partners to construct a new wind farm to be situated in the Poconos, just off the Pennsylvania Turnpike’s Northeast Extension. The new wind farm will consist of 12 turbines and is expected to produce 20 MW, 40 percent of which will supply Penn’s additional purchase.