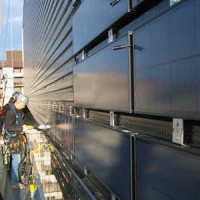 California, United States [RenewableEnergyWorld.com] Thanks to outdated design, buildings consume close to 70 percent of all U.S. energy, so it’s not surprising that President Barack Obama’s stimulus package includes $65 billion in funding and tax credits for green energy and energy efficiency. But the technology choices for adopting building-integrated renewable energy (BIRE) can still be awe-inspiring: should architects focus on the U.S. subsidy of $5 billion for weatherization, $4.5 billion for transforming federal buildings into green buildings or the $3.6 billion for efficiency and other savings?

Perhaps the solution to the dilemma of where to start is to simultaneously use as many complementary technologies as possible, including geothermal, solar and wind energy systems, among others, in the same building. Indeed, building-integrated options in solar and wind are becoming commonplace, and new technology promises to make geothermal adoption-friendly, as well.

This multi-technology goal for BIRE is being encouraged by the Leadership in Energy and Environmental Design (LEED) Green Building Rating System, developed in 1998 by the U.S. Green Building Council (USGBC), which sets out standards for environmentally sustainable construction. According to one recent count, there are more than 14,000 projects that now include at least some LEED principles in all 50 states and 30 countries, covering over a billion square feet of space. Architects are eager to incorporate these requirements into designs submitted to the American Institute of Architects, which honors top designs yearly.

Solar systems in building integration now routinely can include hybrid methods of energy capture, tapping both photovoltaic and thermal heat. “The market for these systems is still extremely robust,” says Victoria Hollick, the president of Conserval Engineering, in Buffalo. The company combines its basic Solar Wall product, which captures warming outside air for interior heating, with PV panels for electricity, as Solar Wall PV/T.

Such a hybrid system was recently installed at Concordia University’s John Molson School of Business, in Montreal, with 25kW of electricity and 75kW of thermal heat. With 3,000 square feet of thermal duct and 384 PV modules, it is the largest of its kind in the world, Hollick says.

In the wind sector, which has primarily been harnessed in larger commercial or industrial schemes, the incorporation of parapet wall-based turbines has become the rage in green architecture. At the Arizona State University’s Global Institute of Sustainability, Lord, Aeck & Sargent and Gould Evans Associates installed six wind turbines as part of a redesign. The AVX 1000 turbines were supplied by Monrovia, CA-based AeroVironment; the units weigh 130 pounds, and capture wind between 4 and 120 mph with an average wind speed of 30 mph, to produce up to 1,000 watts of energy.

Such wall-mounted units tend to be clustered on one side or corner of a structure, to capture up swells and cross-currents. The company markets the systems as “Architectural Wind.” Next year, ASU plans to add a 24kW solar PV system on the roof.

Beneath virtually every building in the country, ground source heat pumps (GHPs) hold out much promise for building integrated use, especially for new buildings where drilling access is presumably easier. Indeed, geothermal could provide a leading share of the renewable mix in a modern structure. According to Patrick J. Hughes, an analyst at the Energy and Transportation Science Division of Oak Ridge National Laboratory, “If the federal government set a goal for the U.S. buildings sector to use no more non-renewable primary energy in 2030 than it did in 2008, based on previous analyses, it is estimated that 35 to 40 percent of this goal, or a savings of 3.4 to 3.9 quads annually, could be achieved through aggressive deployment of GHPs. ”

One company pushing the edge of drilling technology for ground source heat pumps is GroundSource Geothermal Inc., of Redwood City, CA, which is developing shallow dry-rock engineered geothermal systems or EGS, at depths ranging between 250 and 400 feet. A 2008 Clean Tech Open award winner, the company is “testing its GeoJetter drill system, comprised of four independently-operating units that use high-pressure and steel shot to yield a finished borehole,” says Dennis Murphy, the president of the company.

Unlike standard drilling, their borehole is elliptically-shaped rather than circular, reducing cuttings by 40%. While building up its capital base, the company expects to launch a pilot residential business in Northern California next year, and subsequently to roll out franchise-detailed operations across the country, he said.

BIRE To Rise Over Mid-Term

Regardless of which renewable energy technologies or how many BIRE solutions residential and commercial buildings opt to adopt soon, expectations are for a robust market over the mid-term. “The overall green building market (both non-residential and residential) is likely to more than double from today’s $36-49 billion to $96-140 billion by 2013,” according to McGraw-Hill’s Green Outlook 2009.