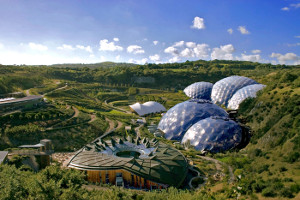 Plans have been revealed for a new geothermal on-site heat and power project to be located at the UK’s Eden project in Cornwall.

The environmental complex of geodesic domes aims to develop the project in partnership with Cornwall-based EGS Energy. Planning permission for a 3-4 MW geothermal power plant is already in place.

If developed, the geothermal plant would produce enough power for the Eden Project and around 4,000 houses, plus heat for space and water heating using water pumped up to the surface at about 180°C. This hot water will runs through a binary cycle turbine to make electricity.

Advances in engineering mean that lower temperature resources in geologically stable regions are now usable and the plant at the north end of the site will be an ‘engineered geothermal system’.

Eden says it is currently raising funds to proceed with the development.