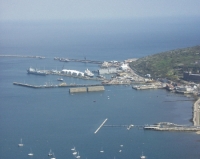 Portland, UK Southwest England already provides a steady flow of renewable energy news – including the UK’s first medium-sized solar plant as well as world-beating wave energy project – but its 241 MW of renewable capacity is set to boom with the development of the 900 MW West of Isle of Wight offshore wind park.

Portland, a harbour on the west of the UK’s south coast, will host offshore renewable energy companies and regional authorities at ‘Ports, Gateway to Offshore Renewables’ on 4 November.

“Chairing this event will galvanise the sector and help share the latest industry thinking, enabling the South West to maintain its place at the heart of the UK renewable market,” said Ian McQuade, commercial manager at Portland Harbour Authority.

“Ports have a vital part to play providing the arterial hubs for servicing and supporting the UK’s offshore renewables industry.”

The event, chaired by Portland Harbour Authority and Regen SW, a regional renewable energy body, will look at how UK ports can adapt to the demands of wind power development and — in particular — the opportunities presented by the planned West Isle of Wight farm.

This zone is one of nine development areas allocated to 12 European companies by tender at the start of the year. An estimated total capacity of over 32 GW would supply 10% of Europe’s electricity while driving a 20-year grid development plan.

Dutch energy firm Eneco, which recently commissioned its first UK wind farm, has development rights for the West of Isle of Wight zone and has declared a goal of rapid growth in the UK market.

Eneco predicts that about 30% of the 723 km² zone could be selectively developed to gain 900 MW of renewable capacity.