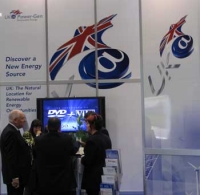 Las Vegas, Nevada [RenewableEnergyAccess.com] Individual businesses know the importance of attending an industry tradeshow, and each kiosk at the 2005 PowerGen Renewable Energy conference is a showcase for technology or marketing. Representatives from the United Kingdom (UK) are promoting 14 different industries at the UK Pavilion this year, double the number of last year for the first PowerGen. But they are all here under the umbrella of the UK Department of Trade and Industry (DTI), which is hosting the UK Trade Mission to the USA.

Barry Holmes, a trade promoter with DTI, said the renewable energy industry has a lot to look forward to. “It is very much at the bottom curve of the growth cycle, which is what makes it so exciting,” he said. Growth is exactly what the industry should see in the UK because of strong federal government support. The region has a renewables obligation (RO) goal of 10 percent by 2010, and that could be increased to 20 percent by 2020, according to Sarah Kydd, who is the deputy director of the DTI’s 2010 Renewable Energy Target Team. In 2004, according to industry information available from DTI, the government announced US $30 million in funding for the Major Photovoltaic Demonstration Program, $160 million for the Offshore Wind Capital Grants Scheme, and $50 million for marine energy projects and a marine energy research center in the country. Federal funding for renewable energy technologies is not unheard of in the United States. However many states and municipalities rely on local funding so projects, and research and development efforts will receive support. “We realize that what we’ve got is this good, solid policy,” Kydd said. “We’ve got a policy that’s driving innovation.” The ability and willingness to share policy ideas and innovative technology is a strong reason to bring UK industry to the states, and vice versa, Kydd said. Environmental passion, and a shared history with their respective Rotary clubs, was enough for Greg Johnson of U.S. based Five Star Energy and Eric Hawkins of Powertech Solar in Dorset, UK, to form an overseas partnership two years ago. Powertech Solar manufactures solar thermal collectors for residential and commercial applications. But instead of simply selling the collectors to customers, the company provides a whole house or business heating solution to customers. Solar thermal is about more than selling the product, it’s about giving people an alternative, Johnson said. While an alternative solution is an easy sell at PowerGen, breaking into the U.S. market with any kind of alternative is challenging. Johnson said he works closely with contractors and builders so they understand the concept behind solar thermal, and are comfortable with installing something other than the standard water heater. ReCycled Refuse International Chairman Anthony Haden-Taylor said he encounters a status quo obstacle when he comes to the U.S. with his landfill reform scheme. Communities across the nation have used transfer stations, landfills and recycling programs in the same ways for years. Despite efforts to sort recyclables and reduce the amount of garbage going into landfills, many towns and cities are still running into problems managing their waste. Unfortunately, Haden-Taylor said, workers’ unions and the public’s acceptance of the way in which current waste programs are run in the U.S. work against his company’s waste treatment facility model that converts organic waste into a biomass product suitable for gasification power projects. The facilities may generate power and create a viable market for cleaned recyclables, but people aren’t comfortable changing the system for political and personal reasons. “We need to make people aware that there is a solution,” he said. Potential solutions to save and create energy are what each of the 14 businesses at the UK Pavilion offer. Business and personal connections in the states are welcome additions to the country’s already thriving renewable energy industry, but hosting a trade mission in Las Vegas is about more than growing the UK’s industry. It’s about sharing innovation and encouraging renewable energy education across political borders and environmental attitudes, Johnson said.