It’s time to ponder a rational comparison of historical U.S. energy incentives. In a thoughtful analysis called “What Would Jefferson Do?” authors Nancy Pfund and Ben Healey of DBL Investors offer some revealing insight to inform the debate.

There is no free market in energy, and calls to action for renewables “to stand up to competition without any government support” would be better informed by a look at historical efforts to promote energy transitions in the U.S.

Coal, oil, gas and nuclear energy did not emerge as fully matured, low-cost energy sources. Instead, they were the beneficiaries of decades of permanent and significant federal government incentives and supportive regulation. As part of a larger push to create jobs, support expansion, and fuel economic growth, the U.S. government has used a variety of financial and regulatory incentives to support energy innovation for over 200 years. Here are some of my favorites:

So how do those incentives compare to current investments in renewables? 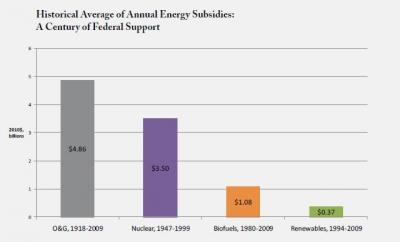 What’s even more surprising is that 50 percent of the Department of Energy’s research and development spending from 1948-2010 supported the nuclear industry. During that same period, 25 percent was spent on fossil fuels, 12 percent on renewables and nine percent on energy efficiency.

Equally important is the fact that support for oil, gas, coal and nuclear has made its way in the permanent tax code, whereas tax incentives for renewables have traditionally been short term and renewed or not renewed on a sporadic basis. That causes a boom/bust market where investors fear making long term bets.

So what’s the take-away?

If we want to insure leadership in the transition to the next predominant energy source — a transition underway in every major economy in the world — we need to use rational policy and sound regulation to steer us in that direction.