More
Home Baseload Hydropower U.S. on the Verge of a Small Hydro Boom? 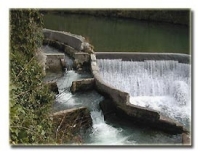 New Hampshire, United States [RenewableEnergyWorld.com] While the U.S. has seen a slight decline in total energy production from hydro resources over the last two decades, the industry is gearing up to reverse that trend and ride the wave of growth seen throughout the other renewable energy industries.

But in order to stimulate new growth, industry leaders say they must correct misinformation about the power source and get the permitting process moving faster for both project upgrades and installation of new technologies like hydrokinetics.

For many people, hydropower conjures images of towering hydroelectric dams that flood land, displace communities and kill aquatic wildlife. But that perception may be changing here in the U.S. as the industry installs more small- to micro- sized systems and proves that it is just as much a part of the distributed energy economy as other renewables that get far more attention.

In fact, large hydroelectric dams above 30 megawatts (MW) only make up 8% of the total hydropower plant population in the U.S., according to the Hydroelectric Power Resources Assessment Database. The other 80% of plants in the U.S. are low power (under 1 MW) or small hydro (between 1 MW and 30 MW).

Few Americans understand the dynamics of the industry, which has given hydropower a “black eye,” says Doug Hall, Program Manager of the Idaho National Laboratory’s Water Energy Program. Misperceptions about the country’s portfolio of projects has also lead people to believe that hydro resources are all used up. That’s far from the truth, he says.

INL released a study in 2006 that identified 130,000 stream reaches around the country that are suitable for projects between 10 kilowatts (kW) and 30 MW. While the study estimates those sites to hold around 100,000 MW of annual capacity, a more realistic estimate is around 30,000 MW of annual capacity when considering technological and environmental limitations at each site. Even with such restrictions, these projects could increase U.S. hydroelectric generation by more than 50%, according to the study.

“The kind of projects we’re talking about would not involve large dams or any inundation of property. These would all be run-of-river projects,” says Hall.

This includes submerging weirs to raise the level of a river and create energy from the difference in water level, or excavating power channels that divert water through a power house and back into the water body. Depending on the size of the project, there are still some environmental concerns associated with these methods; however, they are considered to be a much more sustainable way of harvesting energy from a moving body of water.

For Lori Barg, Chief Executive of Community Hydro in Plainfield, Vermont, encouraging developers to use these methods should be a priority for every state. Unfortunately, she’s doing business in a state that hasn’t seen a new grid-connected hydroelectric facility built in 20 years. That’s because the slow, expensive permitting process makes projects economically unfeasible, she says.

According to Barg, obtaining federal and state permits can add $2,000 per installed kW for a small hydro system, a figure that she calls “a project killer.” This is partly because Vermont does not have a standardized permitting procedure.

“Obtaining the necessary permits is such a deterrent. It’s important to have regulations, but I find myself having to go through 12 different agencies just to get a project off the ground. It doesn’t make sense and it’s not allowing Vermont to develop it’s abundant hydro resources,” Barg says.

Community Hydro develops energy recovery systems for municipal water treatment facilities, upgrades old mill dams into electrical generation facilities and installs damless diversion systems, which she says “are the way to go” for the least environmental impact. Currently, Barg is assisting in the development of projects in Hawaii, Massachusetts, New Hampshire and Oregon, but is only doing feasibility assessments in Vermont.

Barg is working with the Vermont legislature to craft a cohesive rule-making process for water-flow and environmental-impact permits in the state. Legislators have agreed to “evaluate the need for a rule-making process,” which she hopes will begin this June. In the meantime, Barg has multiple megawatts worth of projects waiting to be developed around the state.

“This process is somewhat impacted by the idea that hydro projects flood the land or take people’s property and create major disturbances. I don’t work on that level,” Barg says. “We are very important from a distributed energy standpoint, and I hope we get recognized as such.”

Linda Church Ciocci thinks that lawmakers and regulators are becoming more receptive to the concerns of the water power industry. As Executive Director of the National Hydropower Association (NHA), it’s her job to make sure that the industry gets the treatment it needs to reverse the downward trend in hydroelectricity production.

“We have so many opportunities to upgrade existing dams, put up new power houses at non-powered dams and build out the resources at other sites in a sustainable way,” says Ciocci. “Then we have all these new technologies that are in the beginning stages like wave, tidal and in-stream hydrokinetics.”

While obtaining a preliminary permit can take as little as six months (more than 50 have been issued), it can take up to five years to get a full-project permit from FERC. NHA is concerned that start-up hydrokinetic developers with limited financial resources won’t be able to handle that five-year timeframe.

One such company, the Virginia-based kinetic hydropower developer Verdant Power, estimates that there are around 12,500 MW of hydrokinetic resources in the U.S. and about 250,000 MW worldwide. If the U.S. wants to take advantage of the untapped potential of its oceans and tidal estuaries, FERC and MMS need make it easier and less costly for new companies to get permits, says Verdant Co-Founder and President Trey Taylor.

In December of 2006, Verdant placed six of its Free Flow turbines in the East River in New York City. Called the Roosevelt Island Tidal Energy (RITE) Project, it was the first multi-turbine hydrokinetic field in the world and generated 1,000 kilowatt-hours per day on average. Taylor says that a third of the $6 million needed for the RITE project went toward environmental impact studies. He supports the need for such impact assessments, but believes the amount of testing can be “cost prohibitive,” and is making it challenging to move onto the next phase of the project.

“It’s tough. Of course you need to test. But there’s a lot of money that goes into the tests, which are showing we have very little impact on fish species. We’d like to be able to move on without the prospect of spending so much of our money on this process,” says Taylor.

Indeed, these are the issues that businesses, lawmakers and state and federal regulators are dealing with as the hydropower industry expands capacity and diversifies technologies. There is a need to bring more clean hydroelectricity online as quickly as possible while also ensuring development is done in an environmentally-friendly way, says NHA’s Ciocci. She is confident that stakeholders will work out a solution to ensure a positive future for the industry.

“There’s growing interest in trying to find ways to bring more hydropower online responsibly,” she says. “It’s a good — and sometimes complicated — time for the industry.”

For more information on this topic, listen to this week’s “Inside Renewable Energy” podcast with Stephen Lacey.