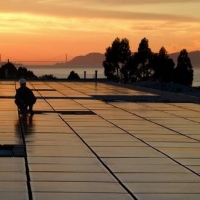 Washington, D.C. United States [RenewableEnergyWorld.com] The U.S. military is not just setting standards in the areas of advanced weaponry. It’s also leading the renewable energy charge. It’s involved in solar, geothermal and wind projects and its stake in the field will continue to grow.

Consider the solar arena: If you thought the biggest solar array in the Americas was in the Southwestern United States, you’d be right. At 140 acres, the site’s 70,000 panels produce peak energy of 14 megawatts, or enough energy to supply 14,000 homes.

But what may not be widely known is that the solar site is at the Nellis Air Force Base in Nevada, providing about one-fourth of the base’s power, with the capability of selling renewable credits back to NV Energy. The site, completed in late 2007, can produce about 30.1 million kilowatt hours per year.

The photovoltaic plant provides electricity that can be used on base, although excess power can be fed into the electric grid. The Nellis solar plant provides clean energy, and the base saves $1 million annually in utility bills. The project, financed by private investors, cost $100 million and took six months to complete.

Another renewable energy resource, geothermal power, has been a mainstay at the China Lake Naval Air Weapons Station in California for more than two decades. Since the 1980s, the 270-MW plant has provided enough power to supply the entire base. The Navy receives revenues from geothermal power facilities. And it recently awarded a contract to build a 30-plus MW geothermal plant at Fallon Naval Air Station in Nevada. The Department of Defense (DOD) is looking at other opportunities for similar public/private ventures to tap renewable energy resources.

“In some cases, large commercial-scale renewable power projects can be built that not only provide renewable power to a DOD installation, but also to the city or community that supports the installation through services and an organic workforce,” he continues. “This means that there could be potential that should be explored for other uses.”

Since the DOD is the single largest energy user in the United States, any marginal increases in efficiency or the use of renewable sources could have significant impacts on civilian supply. According to DOD reports, the military consumes 1.2 percent of the energy required in the United States. While the vast majority of its more than 832 trillion BTUs are consumed by aircraft, vehicles and ships, at least 12 percent of its needs are met by electricity at its more than 5,300 sites.

The Energy Policy Act of 2005 mandated an increased share of renewable energy over the next decade, therefore causing more urgency in the removal of fossil fuels from some of the military’s uses. By 2013, the military must acquire 7.5 percent of its electricity from renewables.

In this era of environmental awareness, all sectors of American society will make greater attempts to go green. The Defense Department is no different and in fact, it will be taking a leadership role.

Bill Opalka is the Editor-in-Chief of the Topic Center newsletters, which are sent via email to subscribers across the globe. Before joining Energy Central, he was the founding editor of a leading wind energy trade publication. He has an extensive career in trade publications and newspapers, mostly focused on the utility sector, covering such issues as restructuring, renewable energy and consumer affairs.