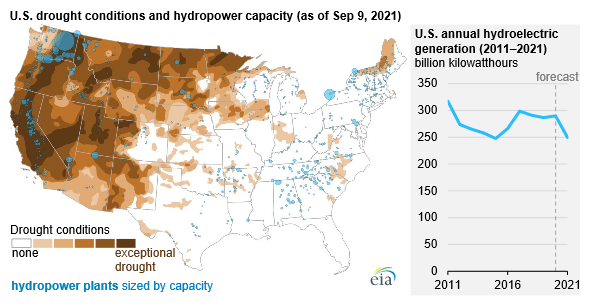 In its latest Short-Term Energy Outlook (STEO), the U.S. Energy Information Administration forecasts that electricity generation from U.S. hydropower plants will be 14% lower in 2021 than it was in 2020.

This is a result of “extreme and exceptional” drought conditions that have been affecting much of the western U.S., especially California and states in the Pacific Northwest, which are home to the majority of U.S. hydropower capacity. The Pacific Northwest’s Columbia River is the fourth-largest river in the U.S. by volume. Its watershed, the Columbia River Basin, covers large parts of Washington, Oregon, Idaho and Montana. In 2020, hydropower plants in these states generated 136 billion kWh of electricity, representing 54% of U.S. hydropower generation that year.

After dry conditions and a record-breaking heat wave affected large parts of the Columbia River Basin this summer, drought emergencies were declared in counties across Washington, Oregon and Idaho. The dry conditions have reduced reservoir storage levels in some Columbia River Basin states. According to the U.S. Department of Agriculture’s National Water and Climate Center (NWCC), reservoir storage in Montana and Washington is at or above average. However, as of the end of August 2021, reservoir storage in Oregon measured 17% of capacity, less than half its historical average capacity of 47%. Idaho reported reservoir storage at 34% of capacity, lower than its historical average capacity of 51%.