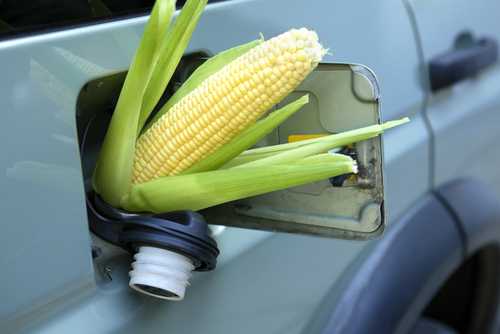 The U.S. on Monday ordered a slight increase in the level of renewable fuels that must be blended with gasoline, and neither biofuel nor oil producers seem particularly happy about it.

Fuel suppliers will have to mix 16.93 billion gallons of corn-based ethanol and other renewable fuels into gasoline this year and 18.11 billion gallons in 2016, the U.S. Environmental Protection Agency announced Monday.

The mandates are above levels proposed by the agency in May but are well-below statutory targets refiners have called unrealistic.

“With today’s final rule, and as Congress intended, EPA is establishing volumes that go beyond historic levels and grow the amount of biofuel in the market over time,” Janet McCabe, the acting assistant administrator for EPA’s Office of Air and Radiation, told reporters. She said the final rule will “provide for ambitious, achievable growth.”

The mandates were authorized by Congress 10 years ago in a program that requires steadily escalating volumes of biofuels to be blended into the country’s gasoline and diesel fuels. The law, designed to shrink the nation’s dependence on foreign crude and curb greenhouse-gas emissions, has pitted oil companies including Chevron Corp. and Exxon Mobil Corp. that oppose using more biofuels against farmers in the corn-rich Midwest who’ve argued for higher amounts.

U.S. ethanol for January delivery rose for the first time in three trading days on the announcement, gaining 0.5 percent to $1.485 a gallon.

Pacific Ethanol Inc., a U.S. West Coast producer, surged 21 percent to $4.99, in its steepest one-day gain since March, in Nasdaq composite trading. Green Plains Inc., the fourth-biggest U.S. Ethanol producer, rose $1.13, or 5 percent, to $23.69 on the Nasdaq, the highest since July 29.

Refiners were down modestly; the industry-wide average fell 0.98 percent.

Last year, the EPA decided to put off setting 2014 quotas, saying it would issue rules for 2014, 2015 and 2016 this year. In May, it proposed targets that fell short of levels mandated in the law – raising the ire of renewable fuel advocates and setting off a flurry of lobbying in Washington.

The announcement represents the first time the EPA has formally waived the statutory mandates for conventional corn-based ethanol in response to industry concerns that Congress’ targets would push them past a 10 percent blend wall – the amount acceptable in all cars and trucks. Federal laws allow the EPA to lower the volume requirements if production falls below expectations.

But McCabe stressed that regulators were seeking to balance Congress’ desire to boost next-generation renewable fuels, particularly those made from non-edible plant material, while acknowledging marketplace realities.

“We must balance Congress’ clear intent to increase renewable fuels…with the real-world circumstances that have affected progress toward those goals,” McCabe said.

Ethanol now accounts for about 10 percent of gasoline consumption. While fuel suppliers have warned that adding more into the mix would damage car engines, the EPA has allowed blends of as much as 15 percent ethanol for cars made after 2001.

Oil industry leaders praised the EPA for using its waiver authority to lower ethanol mandates but said the agency didn’t go far enough. The final targets for 2015 and 2016 are beyond the American Petroleum Institute’s request to cap the total ethanol mandate at 9.7 percent of gasoline demand, which would provide a buffer below the 10 percent blend accepted in all cars and trucks to accommodate sales of ethanol-free gasoline.

“EPA’s final rule relies on unrealistic increases in sales of higher ethanol fuel blends despite the fact that most cars cannot use them,” said API President Jack Gerard.

The announcement was a blow to corn growers, who count on robust annual biofuel targets to drive demand for their crops. Ethanol is projected to consume 38 percent of this year’s corn crop.

Biofuel producers had implored the Obama administration to keep targets at the congressionally mandated levels, including a ceiling for conventional corn-based ethanol.

By departing down from those statutory targets, “the oil industry is being rewarded for its unwillingness to follow the law and invest in infrastructure to move toward cleaner renewable fuel, which sets a dangerous precedent for the future of the program” said Growth Energy, a biofuel producer group, in a statement.

Under congressional targets, the U.S. was to use 20.5 billion gallons of renewable fuels this year, including 15 billion gallons of ethanol derived from corn. But those numbers are based on 2007 fuel consumption forecasts, and in the eight years since, gasoline demand has grown more slowly than anticipated.

It has surged this year, however, creating the potential for more biofuels to be added. Drivers burned 9.47 million barrels a day in August, up 3.8 percent from two years ago.

The EPA’s initial proposal outlined on May 29, as directed by a court settlement with the oil industry, would have required refiners to use some 17.4 billion gallons of renewable fuels next year, with about 14 billion of those coming from traditional corn ethanol. For 2015, EPA proposed a requirement for 16.3 billion gallons of total renewable fuels, including 13.4 billion in traditional ethanol derived from corn.

The higher final targets could provide inflationary pressure on the price of renewable identification numbers, the credits refiners use for compliance, said Timothy Cheung, vice president of the energy research firm ClearView Energy.

Those RINs can be bought and sold by refiners and banked for up to two years.